Last week, in You Have 1 New Notification On Klout!, I used social media metrics site Klout to illustrate how choice of axis scales can exaggerate or wash out the variation in a data set. Today I’ll pick on another social media metrics site, Topsy, to show how to pick meaningful axis tick spacing parameters. [Note from the future: according to the Social Media Management Software Graveyard, both Topsy and Klout have been shut down.]

A meaningful axis spacing allows a human viewer to make sense of the numbers in your chart.

Here is a chart of Twitter mentions of my blog over a one week period. Sorry the chart’s too wide, that’s as small as Topsy would make it and still have text large enough to read. You could right click on it and choose your browser’s equivalent of “Open Image In New Tab” to see it in all its glory.

This kind of unorthodox labeling causes the humans to have to think too much about the chart. Sometimes the choice of incredible charting options like this leads to lack of credibility of the whole chart.

In a 7-day graph, what would be an intuitive axis tick spacing? Let’s try one day, since one week is too wide and one hour too narrow. In general, numbers that are 1, 2, or 5 times a power of ten make good values for axis tick spacing. 1, 20, 500, 0.01, and 0.5 are reasonable choices. If the scale is days, and a spacing of 1 or 2 days result in crowded labels, 7 days is a reasonable choice.

Here I’ve reconstructed Topsy’s 7-day chart with a 1-day axis tick spacing. It’s very natural, the ticks and gridlines are spaced the same as the data points, one day apart. Nobody has to use any excess gray matter to understand the time scale. 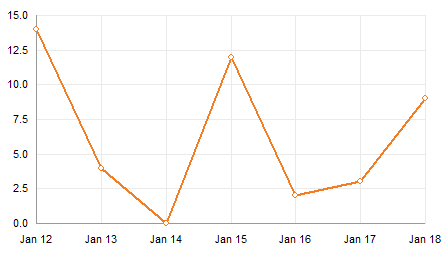 Here is the 14-day Topsy data plotted with a 1-day axis spacing. It is as easy to read as me 7-day chart with 1-day spacing, which is to say, much easier than the Topsy Turvy spacing in the original chart. 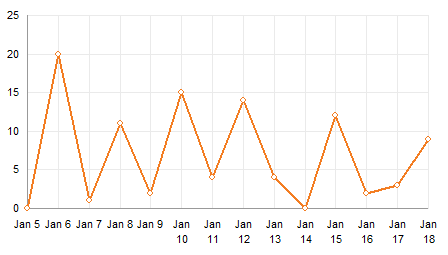 This is really more axis labels than are needed, and some of them are forced to wrap so they don’t overlap. We can fix this by using a 2-day axis spacing. Also easy to read. I’ve helped the viewer by placing small minor tick marks at 1-day intervals. 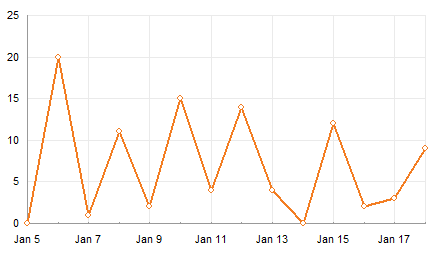 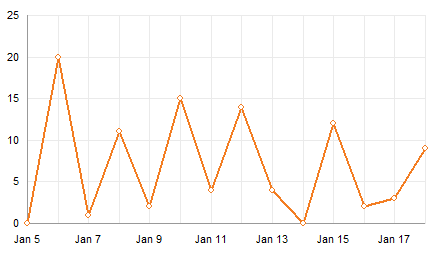 So what was Topsy thinking? Well, I can’t answer that, but I can estimate the axis tick positioning that they used.

Here is Topsy’s 7-day data. I’ve secretly replaced the regular time scale axis with an XY series that has spacing independent of the actual plotted points. Vertical error bars on the invisible points serve as my gridlines. The X values are based on formulas I can tweak in the worksheet, and I align the custom gridlines to closely resemble the original Topsy alignment. Jan 13 and Jan 15 both appear twice as in the original chart. 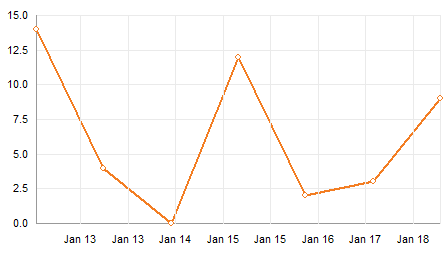 I’ve reproduced the 14-day chart as well. The first gridline appears at 3:20 pm on January 5, which rounds up to Jan 6. Subsequent labels are 33 hours and 20 minutes apart. Again, not so intuitive. 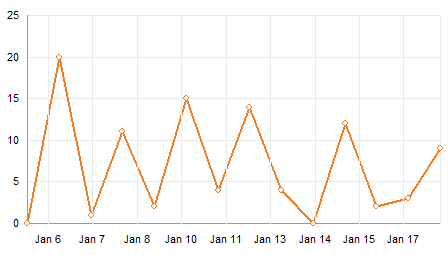 I suspect the charting mechanism has a nice algorithm to calculate the spacing based on the minimum and maximum data values, but it doesn’t consider the actual data spacing, nor does it investigate alternative units. And the algorithm was automated before a human had a chance to look at it and say “Huh??”