Every so often I get an email with a subject line that’s something like “Jon, you have 1 new notification on Klout!” Wow, another social network thing, to go with all the other ones. Sure, I follow a bunch of people on Twitter every day, and I have a neglected Facebook account and a LinkedIn account that I don’t know what it’s useful for yet. So I also have a Klout account. [Note from the future: according to the Social Media Management Software Graveyard, Klout has been shut down.] 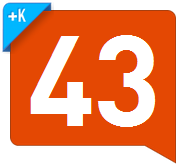 I dunno, I guess that’s pretty good. Some of my colleagues, and the people I follow on Twitter mostly fall in the range between 25 and 55. So who else has a 43? My fellow Excel chart master, Jorge Camoes, has a 43. An old college buddy, Joel Foner, has a 43. So does fellow Microsoft Excel MVP Ken Puls. Annmariastat has a 43, and she doesn’t even have a Klout account, but she has a Wikipedia entry. So I’m in good company.

The first thing I noticed when I followed the link in the email this morning (I delete most Klout emails without following the link) was this chart showing my score over the past month. 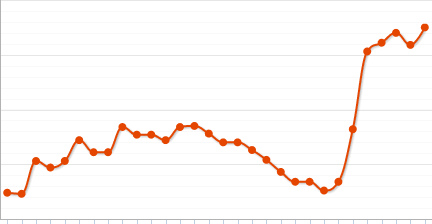 Wow, a few days ago, I really got a huge boost in my score.

Then I looked a little more closely, and read the axis labels. Over the past month, my score has ranged from about 42 to about 43.

This is a good example of how the scale of a value axis can exaggerate or play down the variability in a signal. Here I’ve reproduced the Klout timeline in Excel:

The total variation in the displayed data is about ±1.8% from the mean. It looks ginormous when the visible Y axis scale is less than 5% of the maximum value. It doesn’t look so substantial when the Y axis scale starts at zero:

Maybe there’s a reasonable intermediate scale. This scale shows some variation, but it doesn’t look like a tsunami:

Another funny thing about Klout is the listing of topics that I’m influential about. Data Visualization is rated Strong, and Visualization is rated High. Well, that’s good, those are topics I’d like to think I’m influential about. New England is rated High? Well, in season I will occasionally tweet about the Red Sox, but that’s the extent of my internet discussion about my home region. Statistics, Technology, good to see both of these here.

Jorge Camoes (who also has a Klout score of 43) says Klout must think I’m sick (insert a pun here for influence/influenza). Klout tells Jorge that he is influential for Coffee, from which he abstains in real life.

Microsoft Excel falls far down my list of topics. Not lowest, but as far as the screen shot could capture. Why am I only Medium for Excel? I’m a Microsoft MVP for Excel, and Excel is one thing I talk a lot about.

I guess this Topics of Influence algorithm needs a bit of work.