Last week I posted a tutorial showing how to make Marimekko Charts in Excel. Marimekko charts, at first glance, are a neat, compact way to show how a handful of segments are divided into subsegments. The segments may be industries or markets, while the subsegments may be companies or divisions doing business in each of these segments. 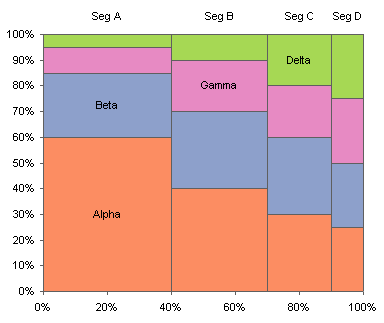 Of course, nothing is ever as good as it seems, is it? The comparisons that can be readily made in a mekko are the widths of each segment, and the heights of each subsegment within a segment. These comparisons are not as easy as it seems, however, because the objects being measured do not share a baseline: each item serves as a platform for the next item in the set.

Comparisons which are impossible are between the sum of subsegments, for example, the total of all Beta subsegments vs. the sum of all Gamma subsegments. In this case it’s an easy comparison, but in general it is not trivial.

Stephen Few of Perceptual Edge pointed out the deficiencies of a Marimekko Chart in A Design Problem. I encourage my readers to visit Steve’s thoughtful analysis and his straightforward solution. I suspect we’ve known what the solution is all along.

The underlying problem with the Marimekko chart is the assumption that since all the data is in a single graph, it is the best way to show the data. Sometimes, however, it’s better to use multiple charts to show multiple sets of data.

Steve has solved the problems of the mekko by creating four column charts. Two charts simply show the totals of the segments divided in either dimension, for example, totals by company and by market segment. Two additional charts subdivide the columns in the first two charts into their constituent parts, showing market segments within companies and companies within market segments. 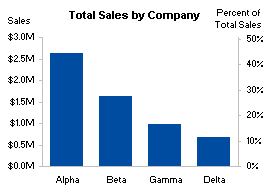 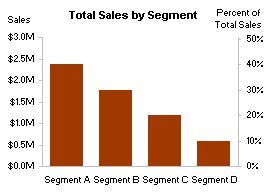 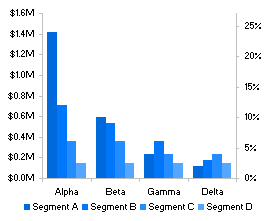 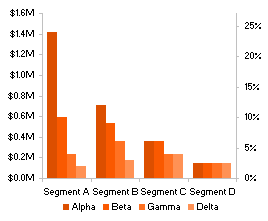 Steve’s approach is elegant, except perhaps for the excess of repeating axes and the discrete nature of the four separate charts. I made an attempt at cleaning this up, carefully overlaying the subsegmented bars onto the segmented bars. 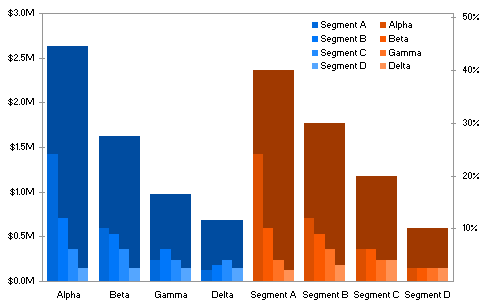 This approach clears up the duplicate axis labeling, but I’m not sure it’s any easier to digest. 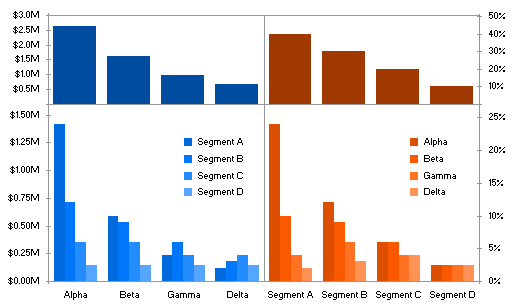 This is arguably cleaner, and just as clear, as Steve’s four charts. It also uses a neat trick to show a split legend which I will describe in an upcoming post.

I have written a few tutorials on how to create these Marimekko alternatives: