I recently posted a tutorial showing how to construct Marimekko Charts in Excel. 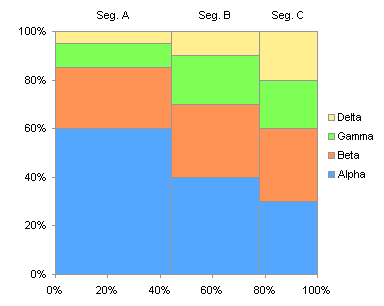 Based on Stephen Few‘s earlier analysis of Marimekko Chart in A Design Problem, I followed up with The Problem with Marimekkos, in which I showed a couple of approaches to charting the same data, partly based on a multiple bar chart approach proposed by Few. 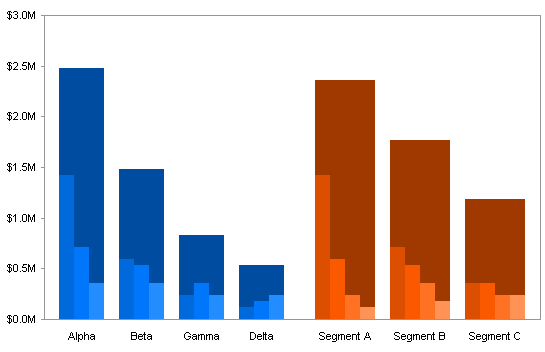 I combined the four bar charts into a 2×2 panel bar chart alternative to a Marimekko chart, but I gave no hints about how to construct such a chart. I’ve already described How to Build a 2×2 Panel Chart, bit this chart is more complicated than the one in that tutorial. 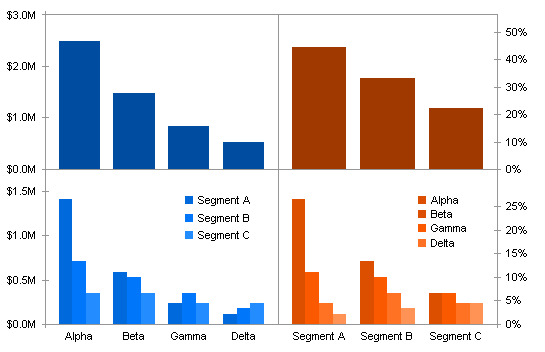 This tutorial applies the same approach as the “hard” overlapping bars technique. In retrospect, there isn’t much difference in effort required between the “easy” and “hard”techniques, but the “hard” way is more flexible, allowing unequal numbres of rows and columns in the original data table.

As in the previous Marimekko-related examples, the data consists of this compact table.

The data layout is the same as in the overlapping bar chart. It is a sparse array, with the data staggered to produce the arrangement of bars in the chart. 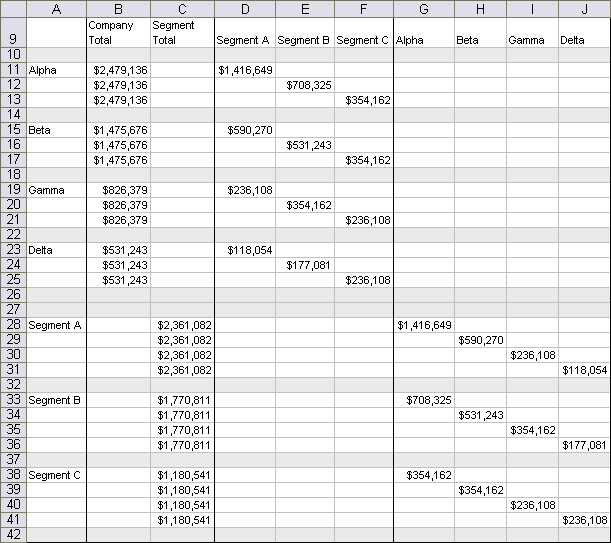 Construction begins in the same manner as in the overlapping bar chart. The data in the table above is used to create a clustered column chart. The gap width is set to zero and the overlap is set to 100. 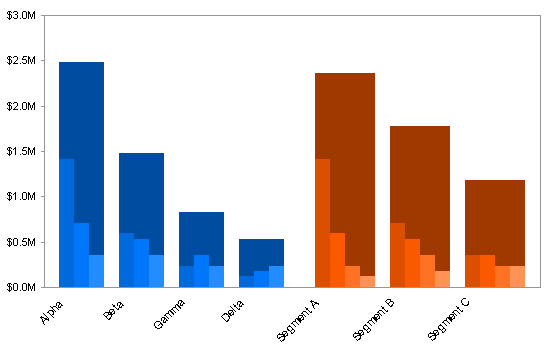 Here is a view of the custom color palette I used to format the bars in this chart. Bar_Chart_Graded_Colors.xls is a small downloadable Excel 2003 workbook that uses this palette.

The Company Total and Segment Total series are moved to the secondary axis. Only the tallest of the individual primary axis series peek over the tops of the Total series. 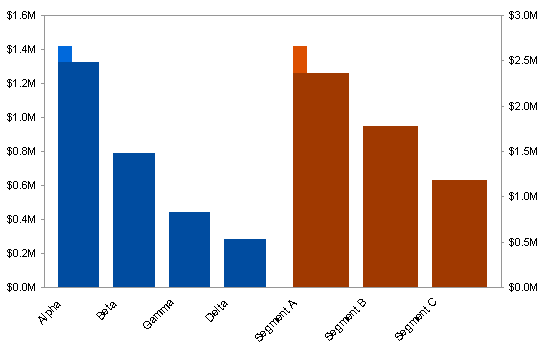 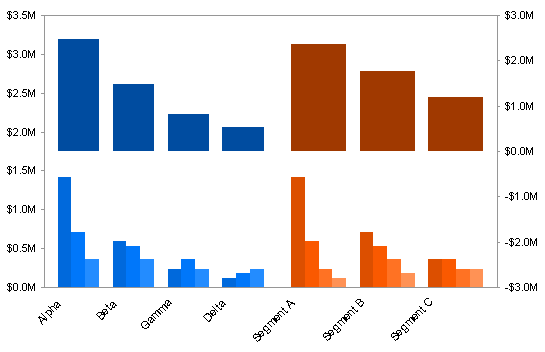 When the Total series were assigned to the secondary axis, Excel only provided a secondary Y axis. A secondary X axis now must be added. Since its default position is at the secondary Y maximum (the top of the chart), the bars seem to hang from the top to their values. 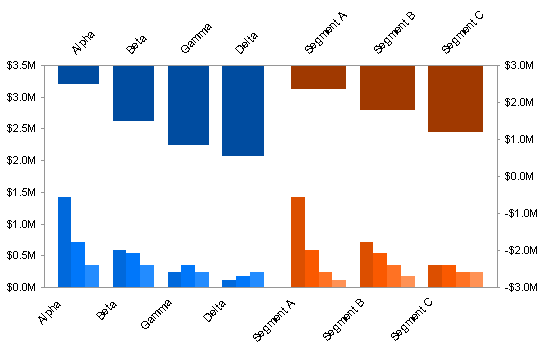 The secondary Y axis is formatted to make the secondary X axis cross at zero, which is in the middle of the chart. 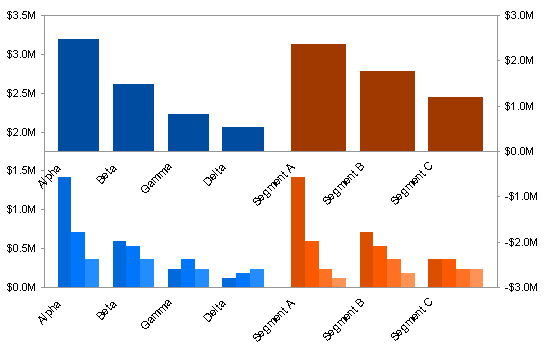 All of the default axis labels will be replaced with customized labels, so these default labels are removed. 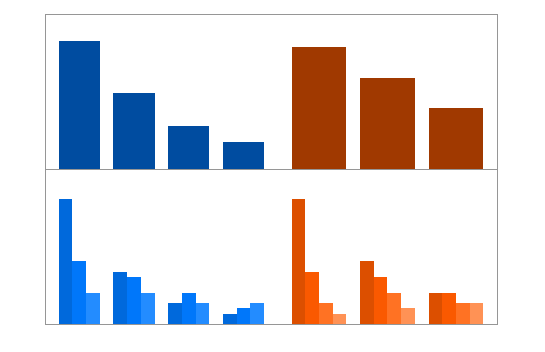 A number of helper series will be added to the chart. These will be XY series, and the X values are defined as the positions of the points along the category axis. This particular chart has 33 category slots as shown below. The XY sereis can be located anywhere along the axis, not just on the integral positions indicated. For example, the left Y axis is located at X=0.5, the gap in the middle is centered on X=17.5, and the right Y axis is located at X=33.5. 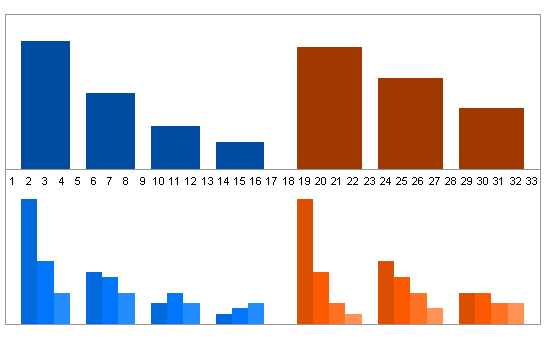 Data for the vertical divider is shown in teal text and for the category labels in purple text in the grid below. 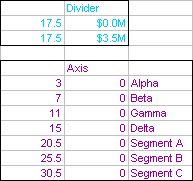 The Divider data is copied and pasted into the chart as a new series. It turns into another column series on the secondary axis. 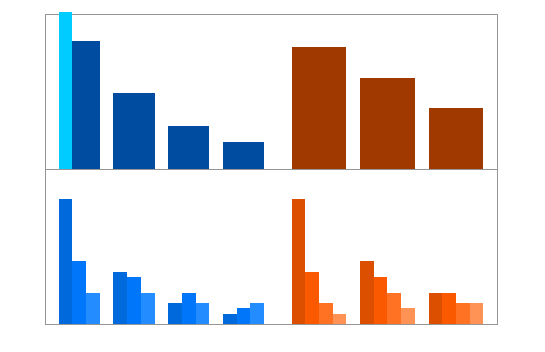 When the series is changed to an XY type and moved to the primary axis, it fits between the groups of bars, and reaches from the top to bottom of the chart. 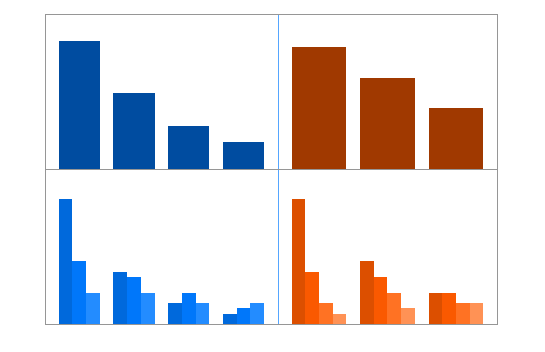 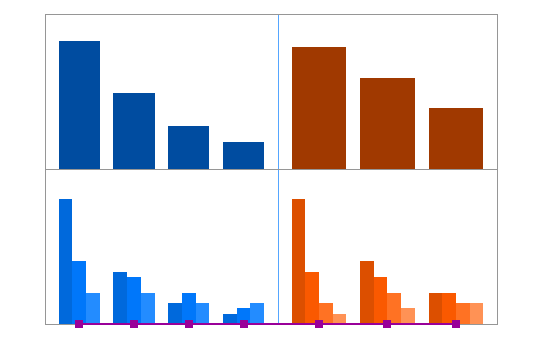 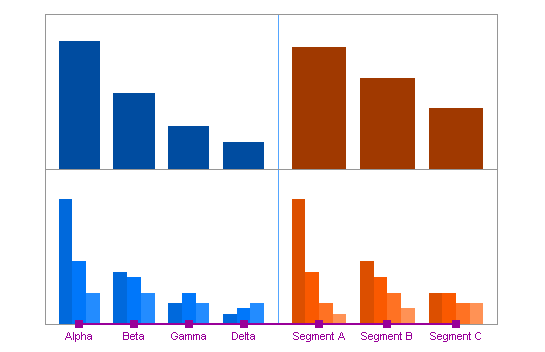 Here’s the chart after a bit of formatting. 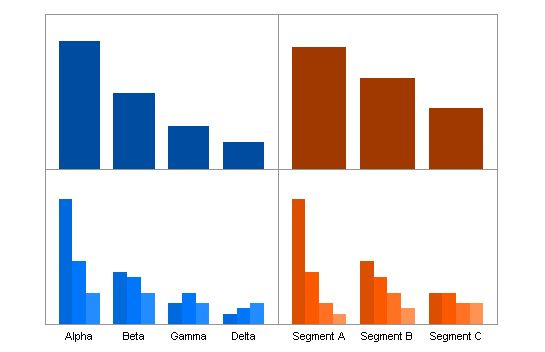 Data for four sets of Y axis labels are shown below. The top and bottom rows of panels each have labels for values and for percentages of the total. 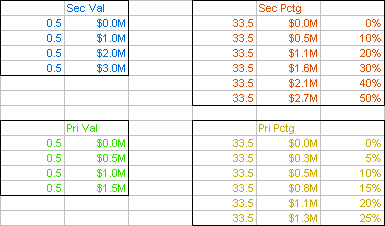 As before, each block of data is pasted in the chart as a new series and assigned to the appropriate axis. The data labels on the two Values series simply use the built-in Values option for data labels. The Percentages series are labeled using the Chart Labeler. The sereies and labels in the chart below are formatted with the same colors as the text in the table above. 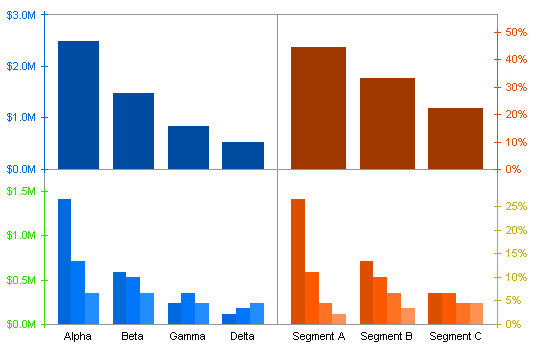 Here’s the chart after the labels and axis series are formatted appropriately. 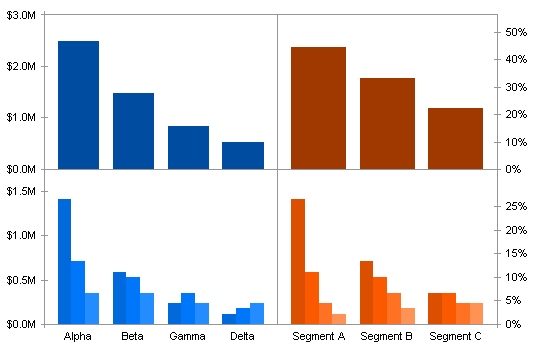 The method described in Double Legend in a Single Chart can be used to add legends to the bottom panels.

By adjusting the Y axis scales, the relative heights of the two panels can be adjusted. For example, in the following chart, the maximum of the primary Y axis was changed to $2.3 million, and the minimum of the secondary Y axis was changed to -$7.5 million. The Y value of the uppermost point of the Divider series also had to be changed to $2.3 million. Everything else in the chart updated automatically, although the Y values for the legend markers were adjusted, because stretching the panel spread them too far apart. 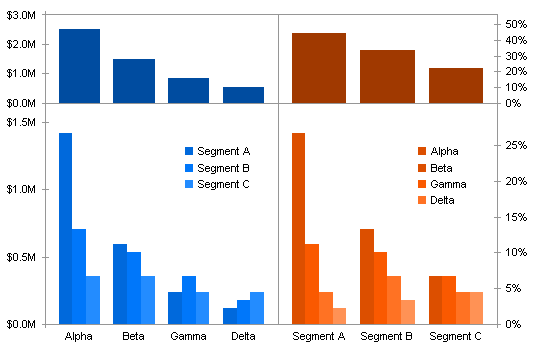