If you select a pivot table and insert a chart, Excel inserts a pivot chart. A pivot chart is a special Excel chart, with some strengths and some limitations. I used to avoid pivot charts because of these limitations, which included not being able to hide the field buttons and not being able to resize the plot area or move axis and chart titles. But Microsoft has kept improving them, and now the few remaining limitations seem pretty reasonable given the power and constraints of pivot tables themselves.

Often, pivot charts are exactly what is needed. Sometimes, however, a regular chart must be used. For example, you might want a scatter plot of the pivot table’s data. Or you might want to add data from another source.

My colleague Debra Dalgleish has a brief Pivot Chart Tutorial on her Contextures.com web site, as well as a FAQ page on Pivot Tables and Pivot Charts. Debra also wrote Using Pivot Tables in Microsoft Excel on this blog.

This article will answer the following common questions about pivot charts in Excel.

The last question could be answered by Making Regular Charts from Pivot Tables. But the question is often asked by someone who has spent significant time formatting his pivot chart, and doesn’t want to lose this formatting or be forced to recreate it.

The screenshot below shows a table with some simple data located in B2:D14. The data is rearranged in F3:I7 (a pivot table could have done this). Below that is a regular Excel chart which plots the data from this second range. 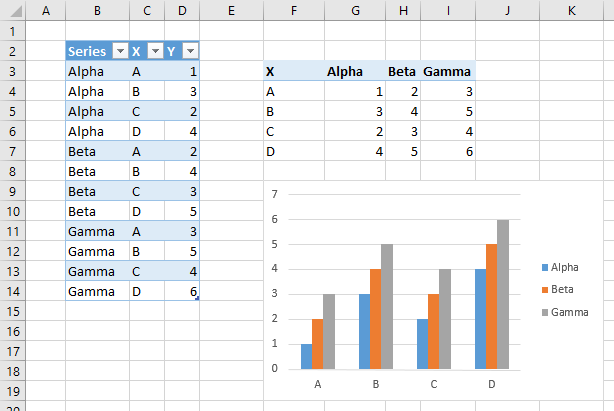 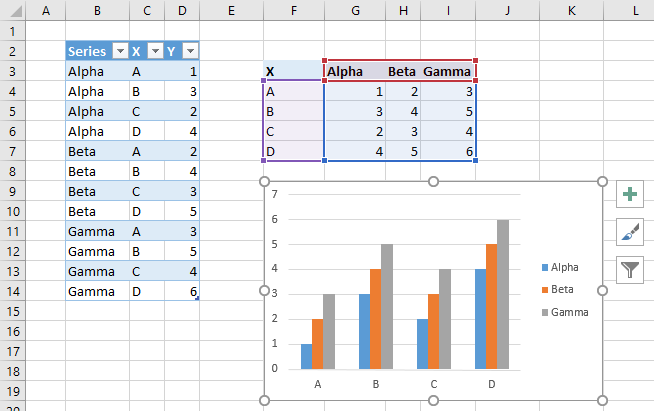 When you select a plotted series, the data for that series is highlighted in the worksheet. The highlighting for the first series of our simple chart in Excel 2013 and 2016 is shown below: the X values (category labels) are purple, the Y values are blue, and the series names are red. You can click and drag the highlighted borders to move the chart data, and you can click and drag on the highlighted corners to resize the chart data. Note that our series is plotted by columns.

When a series is selected, you can also see the corresponding SERIES formula in the formula bar. This series formula has the following components:

You can edit this formula in place to adjust the chart data. 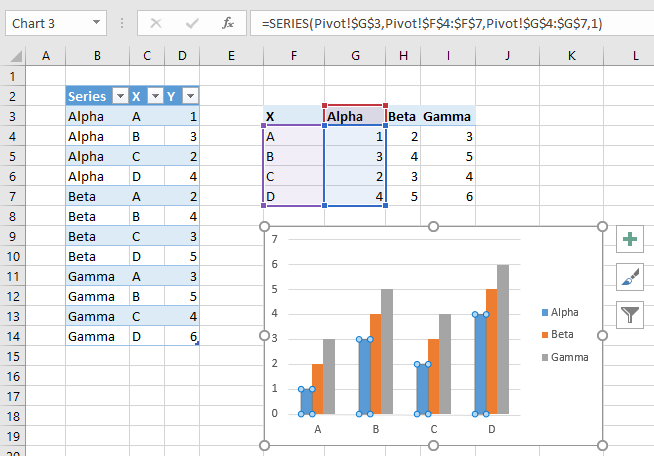 Another way to adjust a chart’s data is the Select Data Source dialog. To open this dialog, click the Chart Tools > Design tab > Select Data button, or tight-click on the chart and click Select Data from the pop-up menu.

Here is the Select Source Data dialog for our regular chart. The box at the top shows the entire source data, which was highlighted when we selected the entire chart. You can edit this as text, or select another source data range in a worksheet. Caveat: if your selection in the Chart data range box intersects a pivot table, your chart will be converted into a pivot chart based on that pivot table. 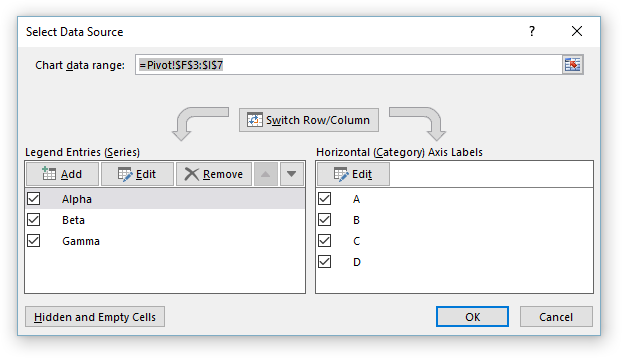 Click the Edit button under Axis Labels in the bottom right part of the dialog, and the Axis Labels dialog appears, showing the range containing the axis labels. You can edit this as text, or select another axis label range.

Select a series in the bottom right part of the dialog and click the corresponding Edit button, and the Edit Series dialog appears, showing the range containing the Y values. You can edit this as text, or select another range of values. 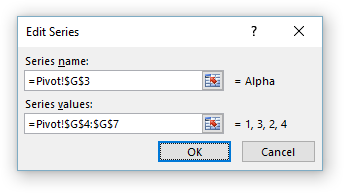 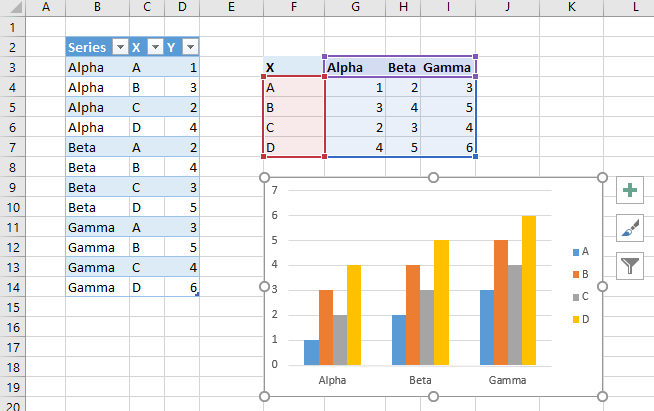 When we select the first series, we see that it is now aligned in rows. 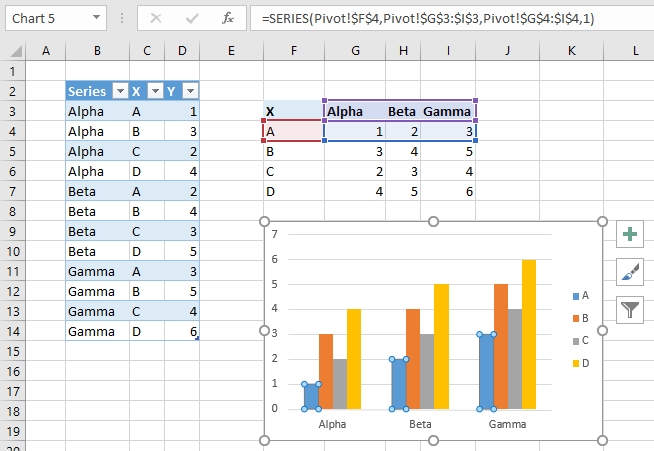 If your chart’s source data intersects a pivot table, clicking Switch Row/Column will convert your chart into a pivot chart based on that pivot table.

Here’s a little-known debugging trick for Excel formulas. You can use the F9 function key or the Ctrl+= shortcut (hold the Ctrl key while you press the = key) to evaluate part or all of a formula in the formula bar. Fortunately this works for a SERIES formula.

If you click in the formula bar and click F9 or Ctrl+=, every section of the formula is evaluated (and the links are disconnected), as shown in this before-and-after screenshot.

Click Esc to restore the original formula, or Enter to keep the evaluated formula.

If you select just part of a formula and then click F9 or Ctrl+=, just the selected part of the formula is evaluated. In this screenshot, the Y value range of G4:G7 is converted to the array {1;3;2;4}.

To unlink a regular chart from its worksheet data, select each series, click in the formula bar, and press the F9 key.

You can copy a chart and paste it anywhere in the same workbook, even onto a different worksheet, and nothing happens to the chart. It shows the same data that it was linked to (on the original sheet), and the series formulas still link back to the original data. This is familiar, expected behavior, although when you want to link the chart to the data on its new parent worksheet, it’s not so welcome. But see Make a Copied Chart Link to New Data if that’s what you need to do. 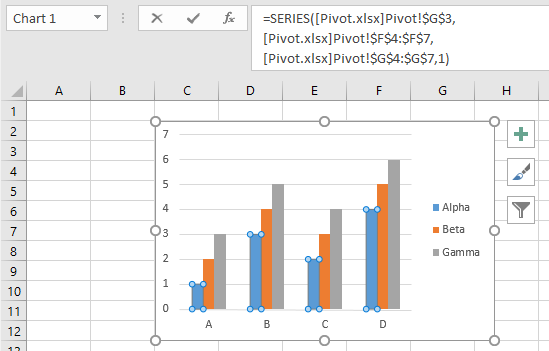 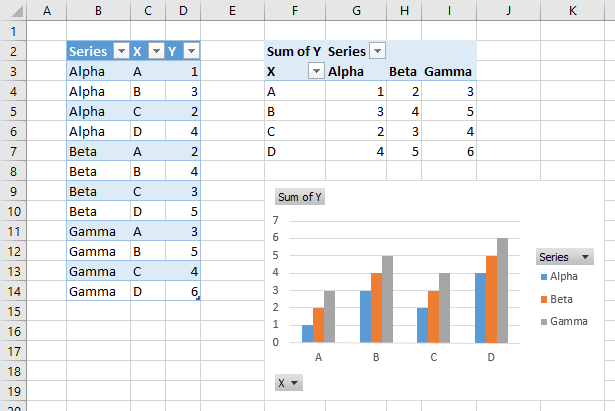 We can hide the field buttons (Pivot Chart Tools > Analyze ribbon tab > Field Buttons) and the chart will look just like our regular chart. But it still has the capabilities and limitations of a pivot chart. 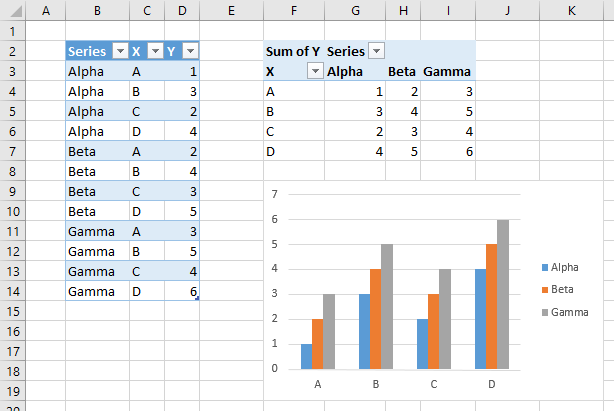 When the pivot chart is selected, no chart data highlights appear in the worksheet. 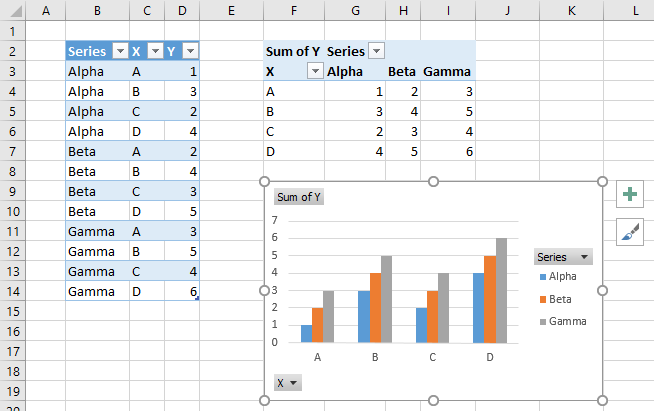 Here is the Select Source Data dialog for our pivot chart. The box at the top shows that the source data is our pivot table; this cannot be changed. The axis labels cannot be edited, nor can the series values be edited. 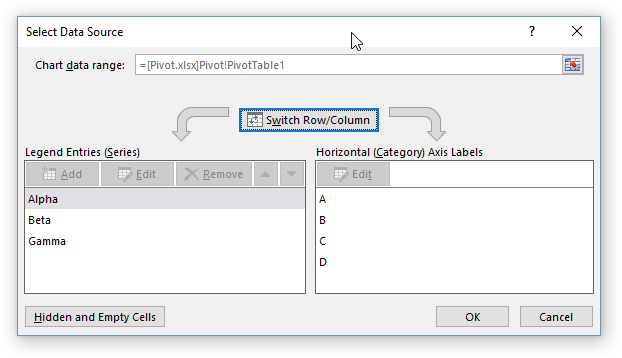 If you click the Switch Row/Column button, the chart changes its appearance to match how our regular chart changed: three series of four categories becomes four series of three categories. But the chart’s data orientation didn’t change, because pivot charts can only plot columns of data. Instead, Excel switched the fields in the rows area of the pivot table with those in the columns area. The X and Series field buttons in the chart have changed places as well.

The series formula shows that the first series of our pivot chart is still plotted by column, with the category labels in column F and Y values in column G. 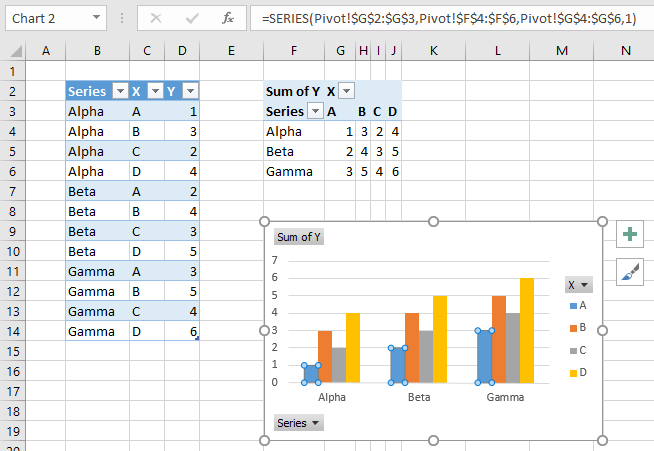 Excel does not let you evaluate part or all of a pivot chart’s SERIES formula using the F9 or Ctrl+= trick, so you can’t use it to disconnect the pivot chart from its pivot table.

You can copy a pivot chart and paste it anywhere in the same workbook, even onto a different worksheet, and nothing happens to the chart. It shows the same data that it was linked to (in the original pivot tables), and the series formulas still link back to this pivot table.

How do I disconnect a pivot chart from its pivot table?

Interesting things happen when you copy a pivot chart to a different workbook. The first thing you may notice is that the field buttons have disappeared, because the pivot chart has been converted to a regular chart. The second thing you’ll notice, if you check out the SERIES formula, is that the links to worksheet ranges have been changed into literal arrays of strings and numbers, as if we used our F9 (Ctrl+=) trick to evaluate the formula. 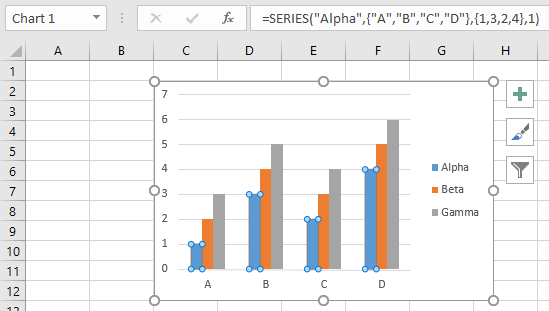 There’s the answer to our first question, how to unlink a pivot chart from its pivot table. Simply copy the pivot chart to a different workbook. Once the links are broken, you can copy it anywhere, even into the original workbook, and it will remain disconnected from the pivot table.

How do I copy a pivot chart and link it to another pivot table?

In the screenshot below, I’ve copied my unlinked chart and pasted it into the original workbook, in a different worksheet with a different Table of data and a different Pivot Table. As noted above, it’s still disconnected. 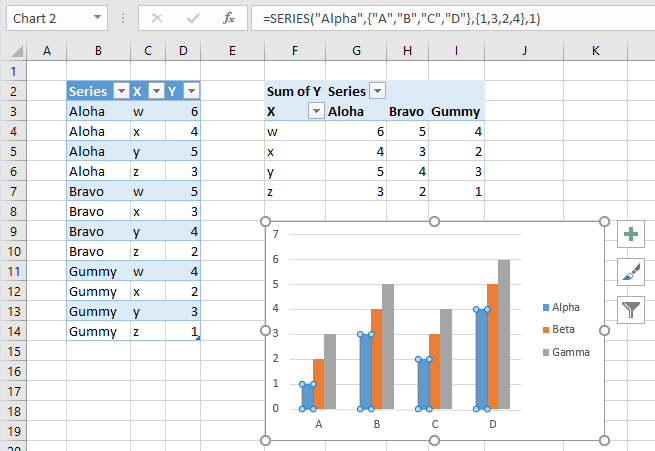 Here is the Select Source Data dialog for our unlinked chart. The Chart Data Range box at the top is empty, because the chart’s data is hard-coded into the chart’s SERIES formulas. You can click in the box and select a data range from the worksheet. 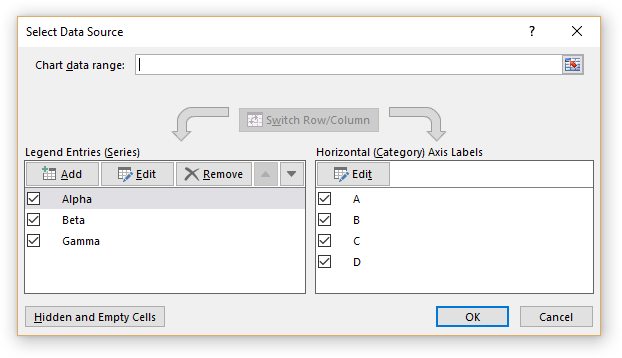 If you select a cell or range that overlaps with a pivot table and click OK, the chart will become a pivot chart and use the data from the selected pivot table. In the screenshot below the chart now has field buttons, so we know it has been converted into a pivot chart. The SERIES formula shows links to the data in the pivot table. 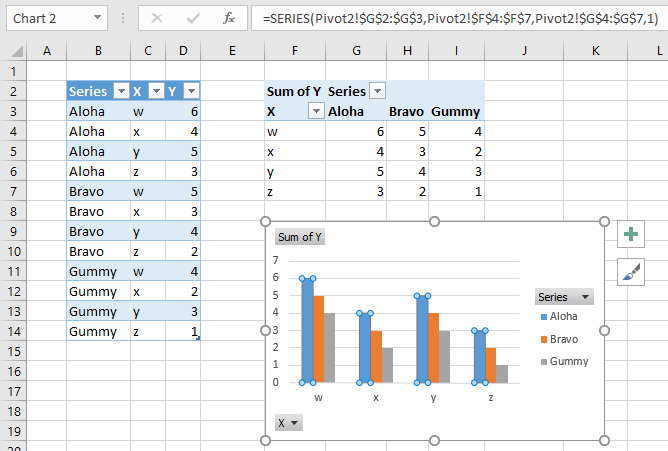 How do I convert a pivot chart into a regular chart and preserve its links to the pivot table?

If we avoid the Chart Data Range box, we can still use the Select Data Source dialog to reconstruct links to the pivot table data. This is essentially the technique in Making Regular Charts from Pivot Tables, but we’re using the pivot chart which may have had custom formats applied.

Under Horizontal (Category) Axis Labels, click Edit, and the Axis Labels mini-dialog will appear, showing the literal array of labels.

You can clear the box and select the axis label range from the worksheet using your mouse. Then click OK.

Now under Legend Entries (Series), select the first series from list, and click Edit. The Edit Series mini-dialog appears with the series name as a string, and the series values as a literal array of numbers. 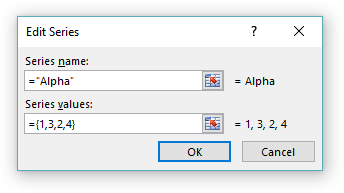 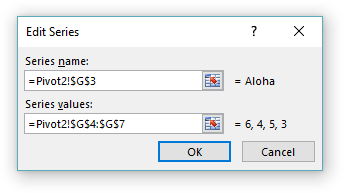 The Select Data Source dialog now looks like this, with the Chart Data Range box displaying the range containing all of the pivot table data. Don’t click in this box, and don’t click Switch Row/Column, or your chart will become a pivot chart. 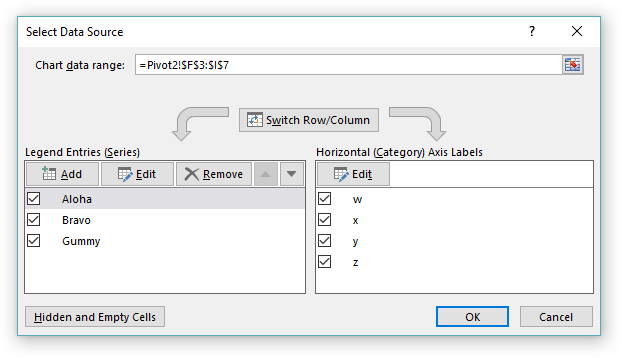 Click OK, and notice how the chart now plots the pivot table data. The data is highlighted in the worksheet, and the chart has no field buttons, because it remains a regular chart. 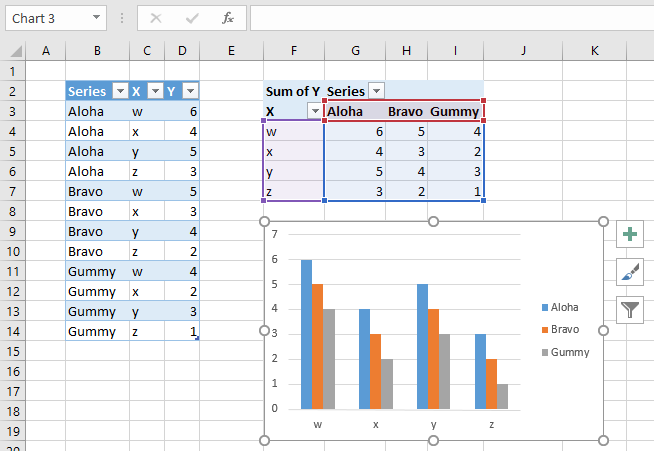 Selecting a single series shows the data is plotted by column, but again, the series highlights verify that the chart is not a pivot chart. 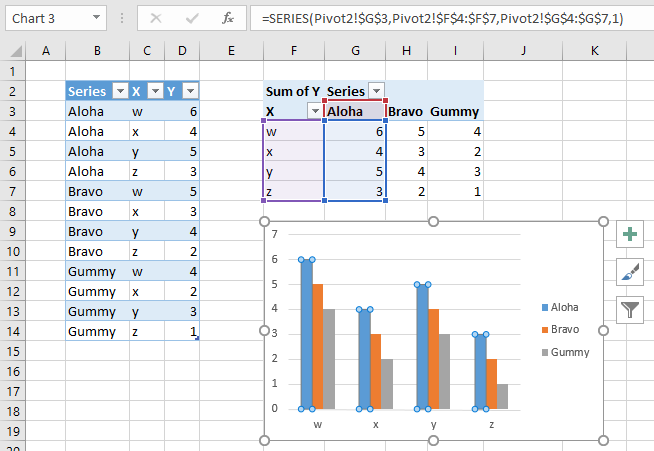 And this is the answer to our last question, how to convert our pivot chart to a regular chart but maintain links to the pivot table’s data. Actually, I’ve linked it here to a new pivot table, but I could link it to the original pivot table in the same way. Strictly speaking, this approach didn’t actually maintain the links, as we had to reconstruct them. There is no way to maintain the links while converting the pivot chart into a regular chart.