In a moment I’ll show how to make a regular chart from a pivot table’s data. But first let’s review some of the strengths and weaknesses of pivot charts.

Pivot charts have some advantages over regular charts:

However, the same infrastructure that conveys these advantages also results in some shortcomings:

Microsoft hosts a number of decent Pivot Table examples. I will use one of them for this tutorial. Go to the Microsoft example 25 easy PivotTable reports, which has a link to Excel 2002 Sample: PivotTable Reports. From this page you can download a self-extracting executable named Reports.exe, which contains four workbooks. The top few records of the Source Data worksheet of the SampleSalespersonReports.xls workbook looks like this: 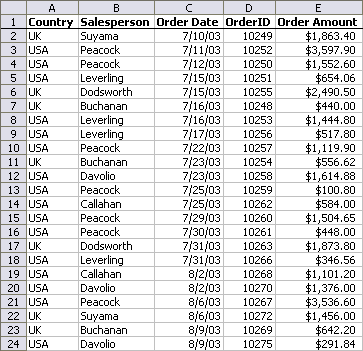 In 2007, select a cell in the data range, and choose PivotTable from the Insert ribbon tab. By default, manipulation of the fields is done in a Pivot Table Field List pane, not in the worksheet. You can override this setting if you’re willing to trade the new pivot capabilities introduced in 2007 for the convenient but apparently old-fashioned on-sheet button manipulation. In the PivotTable Field List, check the boxes in front of the fields you want in the pivot table, then drag them to the appropriate areas at the bottom of the pane. It’s basically the same as in 2003, just within the task pane. 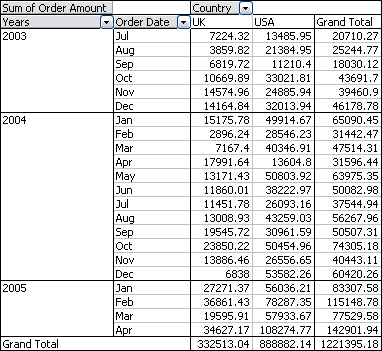 To make a pivot chart, select any part of the pivot table and insert a chart. Excel 2007 places the pivot chart on the active worksheet.

In Excel 2003 and earlier, by default the pivot table is created on its own chart sheet. This is rather inconvenient, since I always move the pivot chart to the same worksheet as the pivot table anyway. To avoid this sheet switching, I select a blank cell that isn’t touching the pivot table, and insert a chart without specifying any data. I then select the blank chart, invoke the Source Data command, and click in the pivot table, which instantly turns the chart into a pivot chart associated permanently with this pivot table. 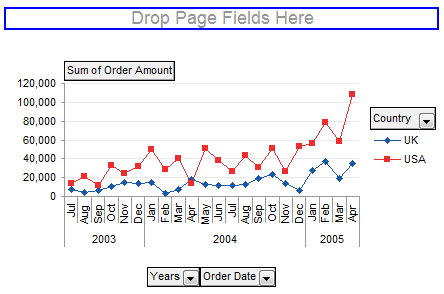 In Excel 2003, you cannot change the size of the plot area or the position of the legend, chart title, or axis titles (other than deleting them). You can remove the pivot field buttons (Pivot Table toolbar > PivotChart dropdown > Hide PivotChart Field Buttons) to gain a little space, but you still can’t move or resize the chart elements. 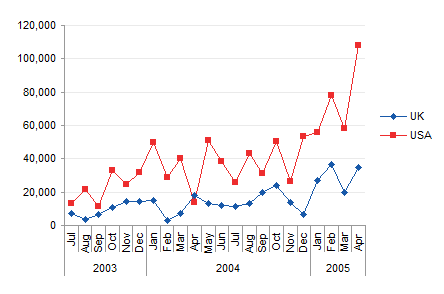 Excel 2007 doesn’t have the Field Buttons cluttering up the chart. Instead there is a floating PivotChart Filter Pane that, together with the PivotTable Field List, serves the same function less intrusively. Excel 2007 also allows you to move or resize the individual chart elements. But the other inflexible features of pivot charts remain. 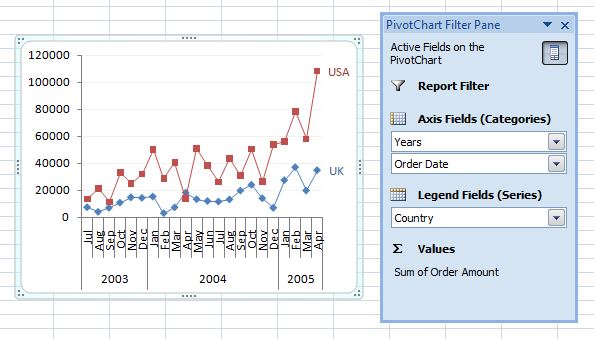 So you decide you need a regular chart to regain your formatting and source data flexibility.

Making a regular chart is actually easier than you think, as long as you are careful about setting the chart series data. You cannot set the overall source data range for the chart. You have to start with a blank chart, and add your data one series at a time.

Here is the protocol for creating a regular chart similar to the pivot chart above, using the pivot table’s data. 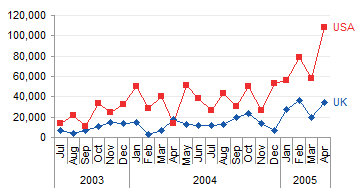 If I have other data for a country not included in the pivot table, I can simply add it to a regular chart per the protocol above. A pivot chart allows no outside data. 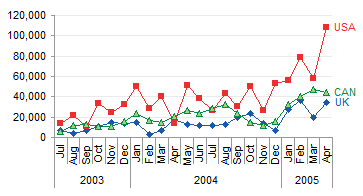 If I want an XY chart, I can create a regular XY chart using the protocol above. A pivot chart cannot use the XY chart type, nor can it use a date-scale axis in a line chart. 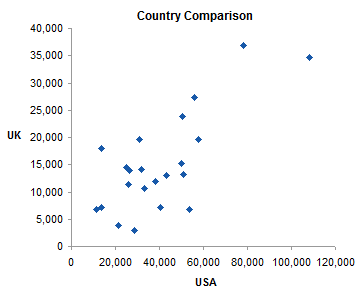 A follow-up post uses a regular chart, showing how to Create and Update a Chart Using Only Part of a Pivot Table’s Data.