In Suicide vs. Homicide by State, per 100,000, Bourree Lam of Freakonomics posted a chart related to a recent Freakonomics podcast that discussed why suicide is “twice as” prevalent in the US as homicide. All of the charts here show suicide or murder rate per 100,000 population.

I’ve recreated the clustered bar chart below. The common problem is that the longer bars tend to overwhelm shorter bars. Most of the red bars seem to be hiding behind the companion blue bars, and it’s harder to notice the shorter blue bars. In addition, the data is sorted alphabetically by state, which completely obscures the ranking of states by either quantity. 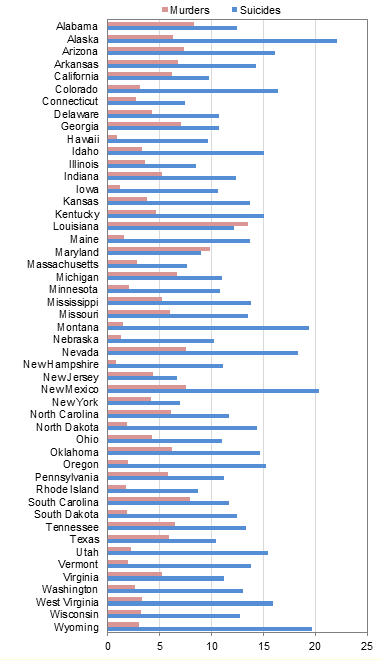 The first step to improving the readability of this chart is to change the chart type to a dot plot. I’ve written about Dot Plots, and created a Dot Plot Utility for anyone who needs dot plots but doesn’t want to follow the tedious procedure to make them by hand. Here is the first dot plot of the data. The data is still sorted alphabetically by state, but already it is easier to read than in the bar chart. 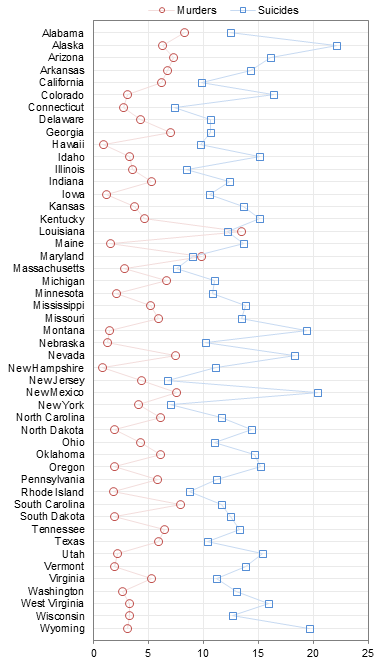 The next step is to sort the data, either by murder rate 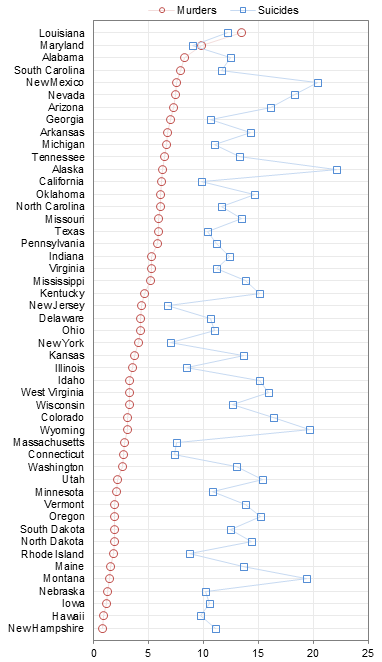 or by suicide rate. 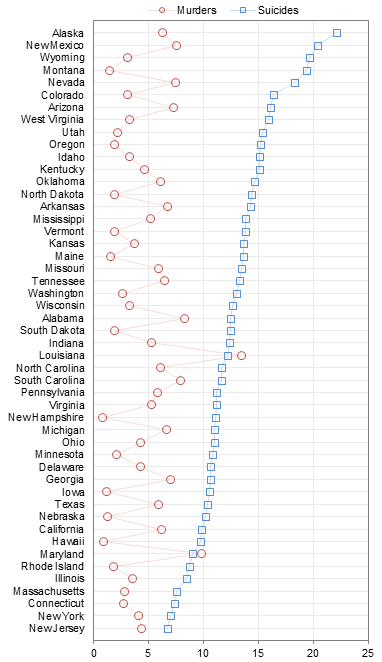 Both of these charts show that suicide and murder rates are uncorrelated. When sorted by one rate, the data for the other rate bounces around as much as in the alphabetically sorted chart. In both charts, it is easy to see that in two of the states plotted, Louisiana and Maryland, murder rate exceeds suicide rate, but that generally the suicide rate falls well below murder rate.

We can look at the ratio of murders to suicides, below. There are only two states in which this ratio exceeds one, again Louisiana and Maryland, and we can also see that the ratio for these states far exceeds the ratio for the rest of the states. A criminologist may want to investigate these two states. 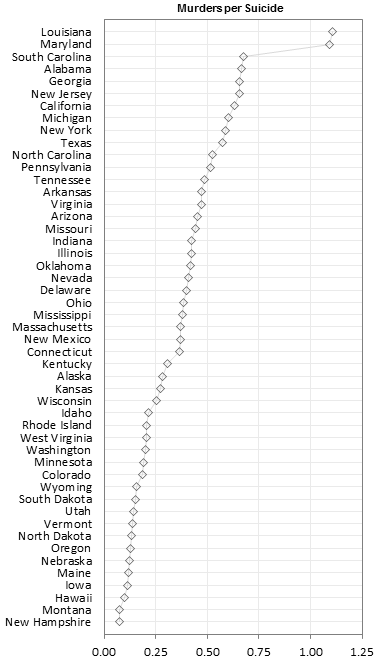 The intent of the Freakonomics podcast is to investigate why there are so many more suicides than murders, so we could look at the opposite ratio, suicides per murder, below. This time two different states, New Hampshire and Montana, are substantially higher than the rest, and a third state, Hawaii, is still markedly higher than the other states. This is the chart that best supports the podcast, and you can tell that rather than suicide being “twice as” prevalent as murder, suicide is probably more like four times as prevalent as murder. 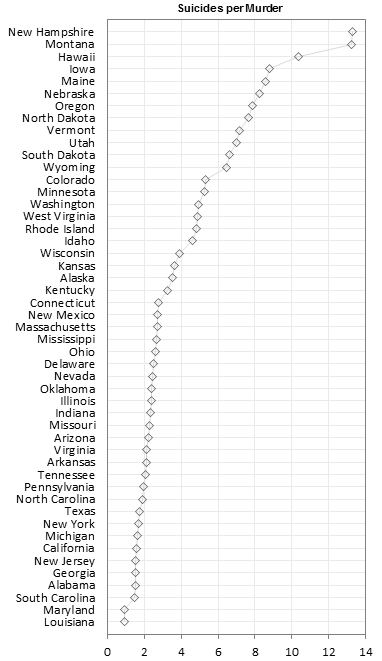 My charts show data for fewer states than the original Freakonomics chart. I followed the sources cited in their post, but the data I found was not complete. I show all states except Florida, and I also omit DC, Puerto Rico, and the Virgin Islands (which had no data on the Freakonomics chart).

My friend and colleague Chandoo has taken a similar but alternate graphing approach in Suicides & Murders by US States – An Interactive Excel Chart. He’s used a combination of worksheet formulas, in-cell charting, and conditional formatting to produce a VBA-free interactive chart. Very cool.