ProBlogger.net recently polled its readers, to see which blog platforms were most common, and published the results in What Blogging Platforms Do We Use?

I use self-hosted WordPress, called WordPress.org in the ProBlogger results. WordPress is by far the most popular platform, with loads of features and thousands of third-party plugins, and I find it  interesting that so many of the other platforms haven’t disappeared yet. I understand that some people don’t want to hassle with hosting their own blog software,which explains Blogger and WordPress.com as the next two choices. I’ve played a bit with both of these, and I can’t imagine why anyone could possibly use Blogger.

I’m not going to discuss the different platforms, though. I’m going to discuss ProBlogger’s visualizations. I’m not picking on ProBlogger, I’m just showing the type of graphic displays that are all too common, because people rely on familiar buttons in whatever charting program they use. 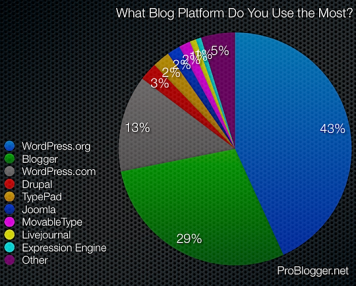 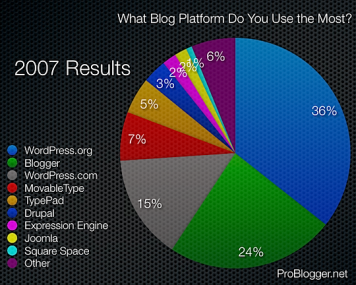 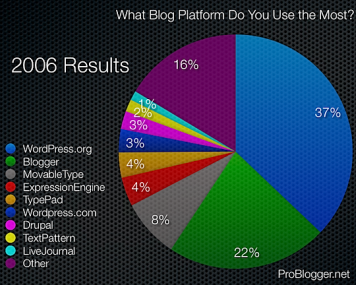 The pies are huge and ugly (these are reduced to 66% of their original size; click on the link above to see the original’s in ProBlogger’s article). The large sizes of the images forces us to scroll up and down to compare the charts. Not only are they large in pixels, the polka dot texture leads to image file sizes close to half a megabyte, or 50 kilobytes per data point (my reduced images are only around 200 KB).

Besides the unfortunate formatting, the pies suffer from several problems common in pie charts. With ten points in each chart, the last few are pretty small. (These charts do have a segment for “Other”, which a team from Microsoft even forgot.) In an attempt to make the values readable, data labels have been added to display the percentages. Of course, these labels overlap, so they fail at their intended purpose.

The corresponding bar charts are only 6 or 7 kilobytes per chart, and are easy to read. Data labels and aren’t required, because the parallel bar lengths can be compared more easily than misoriented wedge areas or angles. A legend is also unneeded: the labels in a horizontal bar chart are horizontal, thus easy to read, and positioned adjacent to the plotted data points. 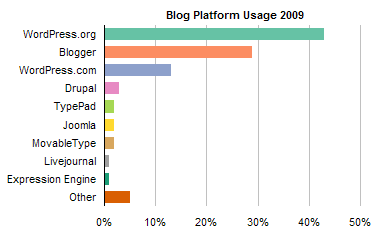 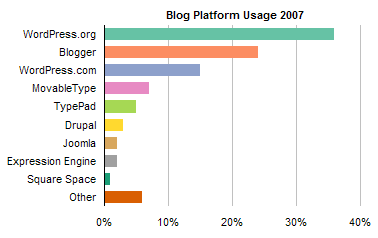 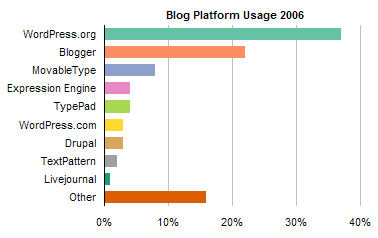 In these bar charts, the colors are not even needed. Their presence here helps to illustrate a weakness in many sets of pie charts: the colors do not refer to the same platform. This makes comparisons between years difficult, since the encoding changes from chart to chart.

This color confusion can be avoided in bar charts by using a single color for all bars. None of these monochromatic bar charts is any less informative than the corresponding  multicolored bar charts above. 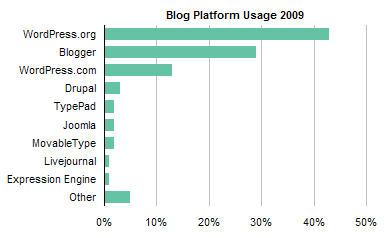 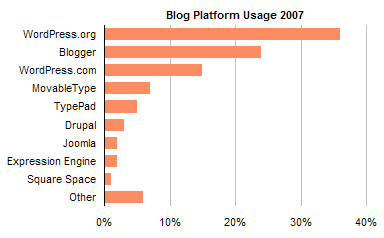 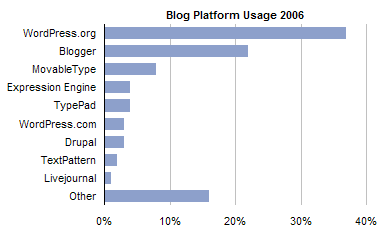 You could add data labels, but they’re not really necessary. 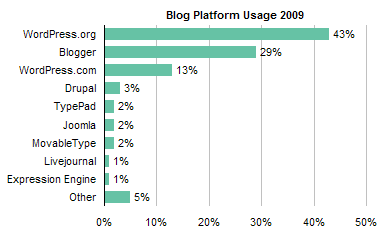 Comparisons between years is made difficult by using a separate chart for each year. With a pie you’re stuck with separate charts. Well, you could make a donut chart, but nobody can tell me this chart isn’t totally illegible: 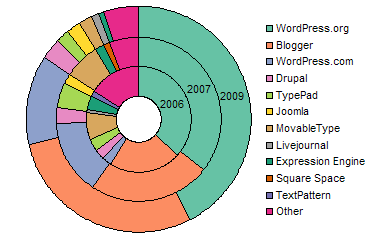 However, you can combine ths data into a bar chart, and the result is not too awful. 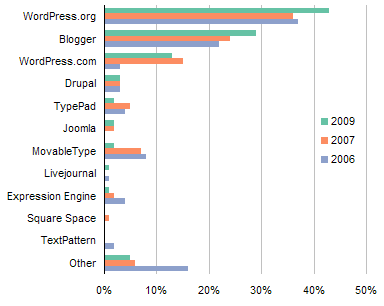 You could use a dot plot, but you lose any sense of the passage of time from year to year. 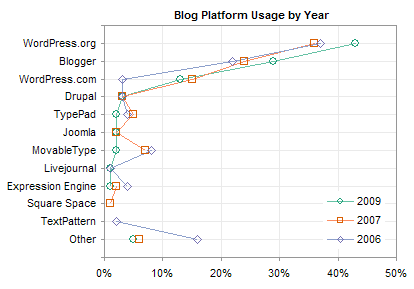 The vertical sense of time in the bar chart is contrary to the customary horizontal depiction of time. A column chart can address this, but it suffers from hard to read vertical labels. 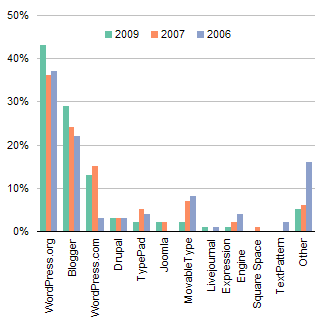 Generally, lines are better than columns at showing time series. This can be accomplished with a panel chart: 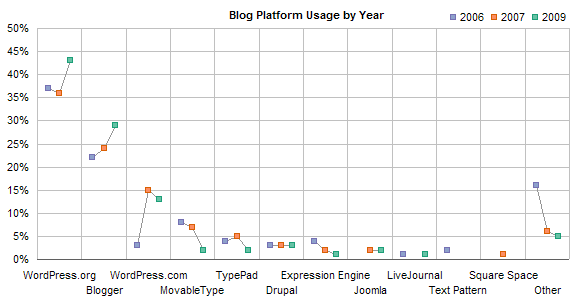 The chart above spaces the yearly data equally even though the space between the years of the last two polls is double the space between the years of the first two polls. If the polls were run in April 2006-October 2007-April 2009, this spacing is correct, but if the polls were given in the same months of each year, you may want to adjust the spacing. 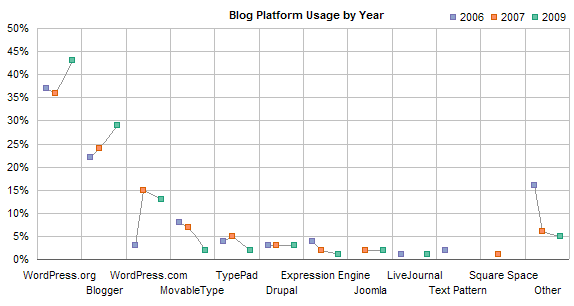 From this chart we can readily compare the usage and trends in usage for several popular blog platforms, as reported by the readers of ProBlogger.net who responded to the poll. Use of the three most popular blogging platforms has increased since the first poll in 2006, while use of other platforms (those named as well as those combined into “other”) has declined.

To summarize, the blog platform poll results charts can be improved by