The VB Password Prompt is a (usually) rare problem that occurs when you are using a workbook or add-in with a password protected Visual Basic project. When you quit Excel, you are asked for a password to open the VB project.

You may not know the password, so you click Cancel once, twice, seventeen times before the prompt is dismissed.

Note: Peltier Tech software does have such a password, but users do not need it to run the software.

This may affect Peltier Tech add-ins, or some other add-in. I’ve written about the VB Password Prompt as part of my documentation for Peltier Tech Charts for Excel.

It is not the fault of the add-in, but of another third-party software application that apparently does not properly release resources when it finishes with them. Windows or Excel or VBA gets confused, decides a given add-in is at fault, and asks for the password so it can open the code and clean up the mess. If you do know the password and enter it at the prompt, your computer checks the project, decides the problem is elsewhere, and proceeds to close Excel.

Debugging the problem is difficult, because it is not consistent across even nominally identical computers. You have to disable any software that could possibly have an effect, and then turn them on one by one until you find the one that causes the problem. Normally the “solution” is either to disable the culprit, or live with the problem.

The kinds of software that may cause a spurious VB password prompt include applications that control printing, either to a physical printer or to pdf files, enterprise document management programs, database applications, and others. Adobe Acrobat has been implicated, as has Acrobat PDFMaker, though this was reported fixed in December 2013. Other third-party programs that have been blamed include ProjectWise, Palo, Hyperion SmartView, Tabs for Excel, Microstrategy, OmniJoin, CapitalIQ, ManicTime, Blue Beam Office AddIn, and Cognos Controller Link for Microsoft Excel.

A recent culprit in the VB Password Prompt bug is Dropbox. This is disturbing to me because I like Dropbox; among the various file syncing programs, I feel that Dropbox runs most smoothly and reliably. I use Google Drive more extensively than Dropbox, and it seems to work pretty well, with occasional hangs and closes. I used to have problems with Microsoft’s OneDrive, but I’ve heard they’ve made some reliability improvements, so I’ll be trying them out again. Nice to have options.

First reported in September 2015, the problem affects VB workbooks and add-ins that contain at least one UserForm. If the UserForm is displayed during operation of the workbook or add-in, then all open workbooks are closed, and then Excel is closed, the insidious password prompt appears. In some cases, clicking Cancel a number of times lets Excel close properly, but sometimes…. 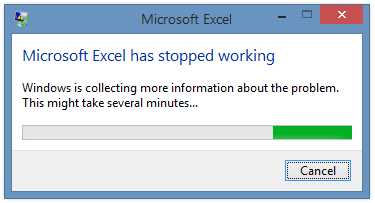 If you use Dropbox, there is a workaround. Dropbox includes a feature called Dropbox Badge, which is closely integrated into Microsoft Office, and allows advanced interaction among users working on the same Office files. Sounds good, except this feature seems to be causing the password prompt to appear. It’s easy enough to turn off Dropbox Badge:

Now you can continue using all your favorite Excel workbooks and icons, and let Dropbox sync your files.