Mike Alexander and I are at it again. Later this spring (if winter ever ends!) we’ll be teaming up to do our Excel Dashboard and Visualization Bootcamp. We’ve streamlined it, so it’s two days instead of three. We’re also holding it in Chicago instead of Dallas for a change of pace.

As Mike has so eloquently written:

This two-day boot camp is designed for Excel users who need to more effectively synthesize data into meaningful dashboards, charts, and visualizations.  The topics presented during this boot camp will introduce you to advanced techniques that will help you build and manage better reporting mechanisms.  Going beyond simple tables and charts, you will learn to:

The Basics of Better Excel Dashboards

Periodic Table of the Elements

I remember in high school, and again in college, learning about the periodic table of the chemical elements.

Image of Periodic Table of the Elements from Elements Database removed at their request. The image above was created in Excel by me, so it falls under the Creative Commons license of this blog.

Russian chemistry professor Dmitri Mendeleev is credited with creating the first periodic table in 1869. He laid out the elements by atomic weight, and started a new row when the chemical properties of the elements began to repeat. Mendeleev had the foresight to leave gaps in his table where he suspected an as-yet undiscovered element should be, and he even had the temerity to make predictions about the properties of the missing elements. He occasionally switched adjacent elements if the properties did not correspond exactly to the atomic weights.

Long after Mendeleev’s time, scientists unraveled the secrets of the atomic and electronic structure of matter. It was learned that Mendeleev’s switching of some adjacent pairs of elements actually placed them in the correct atomic number sequence, defined by the number of electrons or protons in the unionized elements. The groups (columns) in the table are characterized by elements with the same valence electron structure, and thus, similar chemical properties.

The periodic table of the elements is an elegant and useful display, which arranges the elements by similar structure and properties,with characteristics changing predictably with changing rows or columns. There are sections for alkali metals, transition metals, rare earth metals, metalloids, nonmetals, and inert gases. In recent years, dozens of less periodic arrangements of objects have been forced into this format, despite the metaphor’s poor fit for most of them.

Periodic Tables of Whatever

One of the most popular is the Periodic Table of Visualization Methods. This is the faux periodic table that has led me to despise the genre. It’s about visualization, yet it’s visually unattractive. Mostly it seems that they had a set of boxes and a list of visualization methods, and pigeonholed the one into the other until they were done. And some of the examples they show (when you mouse over the “elements”) are only worthy of USA Today.

The Periodic table of awesoments is amusing. Some thought went into this PT of X. I liked Group 2 (IIA) as well as the faux metalloids, the IIIA-VIA metals, and the Rare Earths. The rest seemed to be a struggle to think of enough other elements to fill the TMs, Halides, Halogens, and Noble Gases. Perhaps I don’t share enough obscure obsessions with the author.

Most of the PT of X attempts suffer from trying to hard to force an inappropriate metaphor. And when the metaphor fits poorly, the PT of X still tries to fit into the exact same periodicity as that of the electronic shell structures of the real elements (i.e., 2-6-10-14). As a result, most are just lame grids.

One of the most creative and descriptive non-chemical periodic tables I’ve ever seen was of musical instruments, done several years ago by a former classmate of my daughter. There was a progression in size from top to bottom (e.g., violin, viola, cello, bass), which is sensible for instruments as well as for atomic elements. The groups were separated into morphologies, with strings over here, woodwinds there, the brass section, and percussion. The “Rare Earth” section was a rehash of the above instruments which had been electrified. Aside from the Rare Earths, there was no attempt to force a fit between this arbitrary X and the chemical elements. And it was an appropriate project for a seventh-grader.

When I first saw the thumbnail for NBA Team Heat Maps on Ben Munson’s Obsessionism blog, I was thinking, great, another gratuitous use of multicolor graphics. I did think it was a great name for a blog, though not being a basketball fan, I wouldn’t consider Ben’s main obsession with the NBA as socially acceptable as, say, an obsession with Excel. (Just kidding, Ben!)

After about 30 seconds, I changed my mind. Each graph is easy to read, and shows the distribution of a team’s point differential over the past five years, When the team graphs are shown in small multiple layout, you can at a glance see and begin to understand the last five years of the NBA. It’s easy to see trends and to compare team performances in clutch games vs. blowouts, as well as rank their overall records. 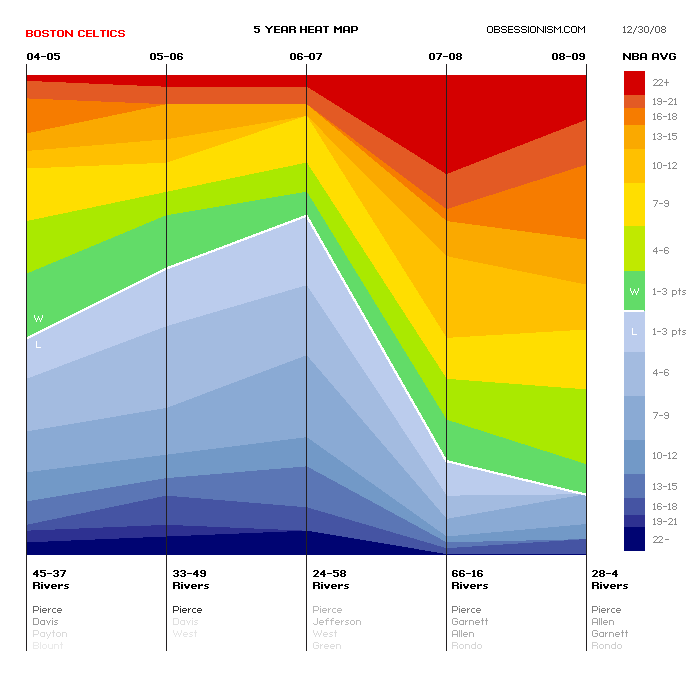 I saw the thumbnail for the NBA Team Maps on the information aesthetics blog, which displays an obsession with the kind of visualizations I don’t care for, i.e., lots of colors, curvy lines going everywhere, cartoony drawings, etc. But  has ten times the subscribers that the PTS Blog has, so I will keep reading it, hoping one day to get it. 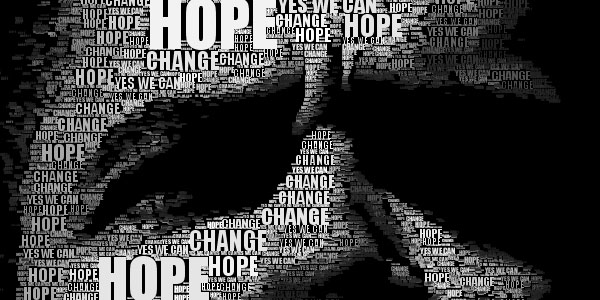 I don’t get the point of Word Portraits, such as the portrait above of Barack Obama from Word Portraits of Presidential Candidates on information aesthetics. What’s the information being visualized? It’s only a collection of words and phrases from the campaign, no information at all. At this point it becomes art, and belongs in a different class of blog. 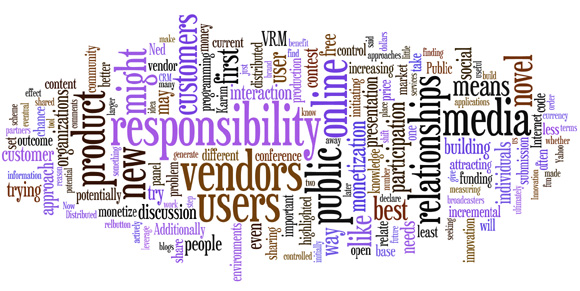 I haven’t quite decided about Wordles. These are related to Word Portraits, but the words at least convey some actual information. Generally each word is displayed in a font size related to the frequency of the word within the corpus analyzed in the wordle. Often the words are color coded to convey additional information about the words and their groupings. 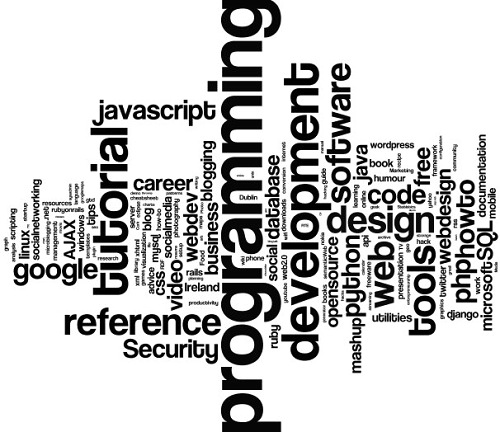 Wordles are an advanced form of word clouds, which are often used on blogs to rate the popularity of categories or tags by showing them in different sizes. Sometimes, though, they come dangerously close to becoming uninformative art, like the Word Portraits.

In Portrait of the Candidate as a Pile of Words the Boston Globe showed a thoughtful analysis of the presidential candidates. Two wordles were created, showing the frequency of words on each candidate’s blog. 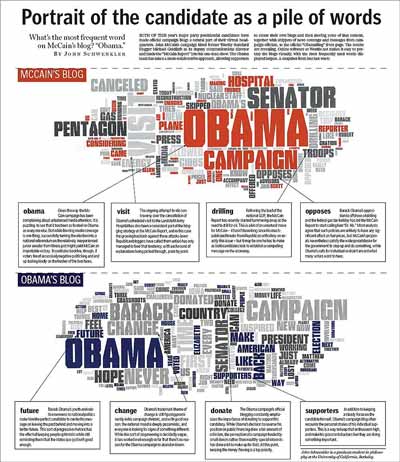 AppScout reviewed the Globe’s article and had this to say:

By running the two blogs through Wordle Boston.com was able to get a reasonably accurate feel for their overall content. The largest word, corresponding to the most frequent use, on Obama’s blog is “Obama.” The largest word on McCain’s blog is “Obama” too! There are other interesting tidbits one only sees by taking the blogs’ words out-of-context and throwing them in a pile.

“Taking words out-of-context and throwing them in a pile.” This is an apt description of the process, and when done thoughtfully it can be very informative. 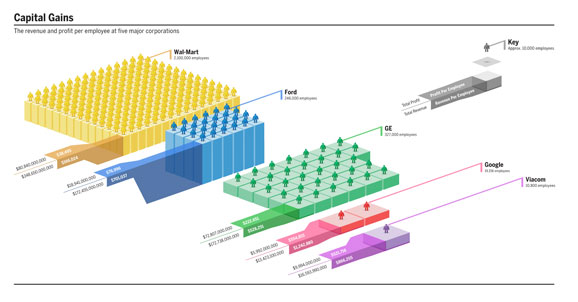 From Infographic example – poor info / great graphic on the Slides that Stick PowerPoint blog, I was pointed at this representation of capital gains for five companies at GOOD Magazine. Pretty colors, but the orientation reminds me of Sim City or Roller Coaster Tycoon, which is what led to my name for this class of graphic. Each of the individual blocks with a person standing on it is supposed to represent 10,000 employees, but the different size of each block distorts this information. A Viacom block is about four times the width or 16 times the area of a Wal-Mart block. But apparently the area of the block’s top surface is related to the profit per employee, and just the number of blocks represents the number of employees. The thicknesses of the blocks must somehow be related to the company’s revenues, but I cannot think of any algorithm that matches up the apparent thickness with either total revenue or revenue per employee. So I only half agree with Slides that Stick’s Jan Schultink: it’s poor info in a poorly conceived graphic. This same information would be easier and quicker to understand in a set of bar charts. 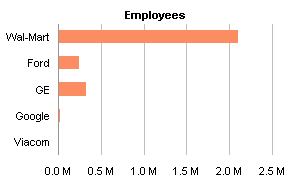 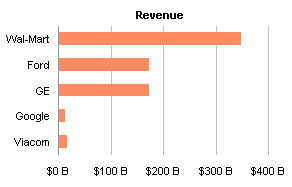 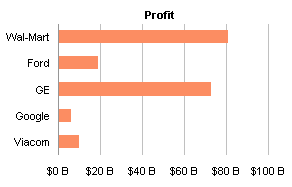 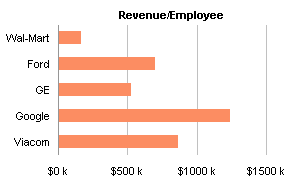 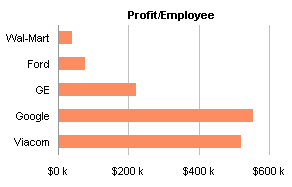 In the first paragraph I cited Robert Kosara’s post A Better Vis Web Community, in which he lamented the sad state of  the visualization blogosphere. As Robert said:

Why are the most popular visualization-related sites almost entirely about pointing at colorful pictures done by others, rather than doing their own? And how can we get more original, quality visualization content on the web?

I was glad to see that I’m not the only one who feels this way, though I have to admit that Robert’s prose is much more elegant than mine would have been. I’ve added a number of blogs on visualization to my feed reader, and removed almost as many when they only point to the same shiny compositions of colorful blobs and arcs. The ones I keep tend to use words like “graph” and “chart” and “data”, rather than “visualization” and “infographic”.

In the Microsoft Charting newsgroup, a reader wanted to show separate lines on a line chart to compare the severity of the medical conditions of different patients after one to five visits. The question was whether it would be possible to resolve the individual patients.

A parallel coordinates chart can show an individual’s condition in front of a background of the entire population. 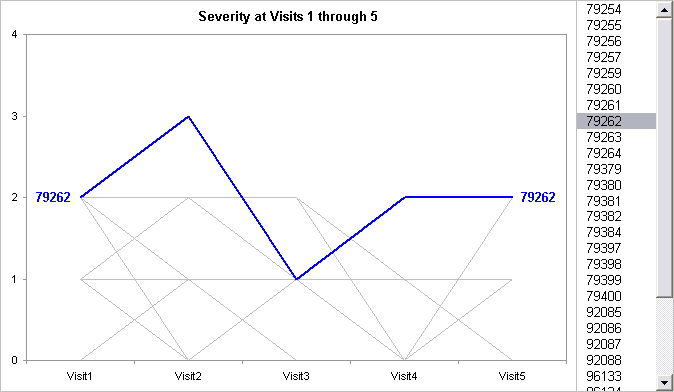