One of the resources I use on my web site is SiteMeter, which has basic (free) and more extensive premium versions of their web site statistics service. I am not endorsing SiteMeter here, just describing their statistics. Sitemeter provides web site tracking by hour of the day. This is pretty granular, compared to daily or monthly statistics, and I haven’t found much use for this detail. In any case, though, it provides a means to illustrate that radar charts, also known as spider charts due to the web-like appearance of their spokes and gridlines, are just not very good for most routine purposes.

Below are two radar plots of site statistics, Site Visits on the left and Page Views on the right, orbiting around the origin according to time of day. Midnight is at the top of each chart, noon at the bottom, and the curves proceed, well, clockwise around the charts. 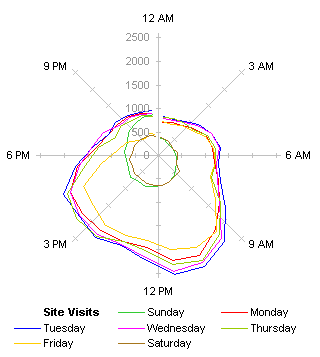 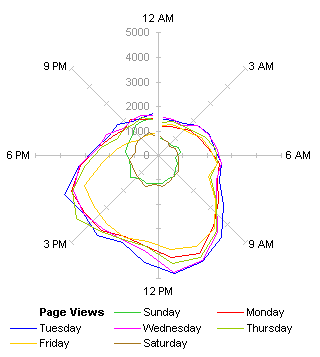 What can we say about the information in these two charts? Well, Saturday and Sunday are close to the center, so they must have less traffic. Also, for the weekdays, the curves bulge at the bottom, so daytime obviously gets more traffic than nighttime. The times in the SiteMeter data corresponds roughly to my own time of day here on the East Coast of the US, since I get around 50% of my traffic from the US, though I don’t offhand know the East Coast vs. West Coast split.

The radar charts certainly look useful at first glance. They are multicolored, which is good, and there is a kind of satisfaction of feeling that the cyclical nature of time (Sunrise, Sunset) is reflected by the cyclical nature of the displays. Because the values are represented by radial distances in the radar charts, it is difficult to compare different times, and it is not easy to follow hour-to-hour trends in the data. 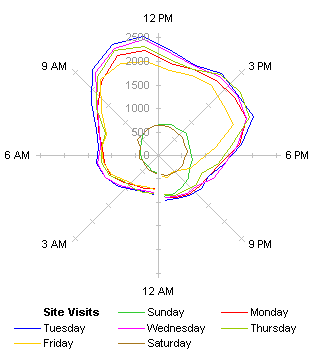 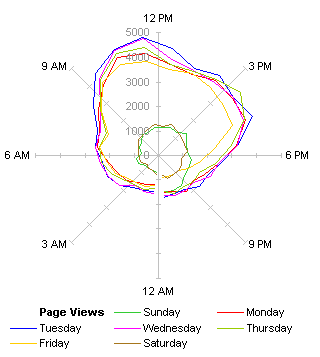 Maybe this helps, maybe it doesn’t. The larger values are higher in the chart, but the variation in the orientation of radial distances is not alleviated. We’re also conditioned to see midnight on the top of our clocks (noon too, on a 12-hour analog clock). The radar chart is the source of cognitive dissonance.

The inferiority of the radar chart becomes even more evident when compared to line charts showing the same Site Visit and Page View data (below). The charts start at midnight on the left and end at midnight on the right, and time flows smoothly from left to right. Instantly more detail is apparent than in the radar charts, and further details reveal themselves on closer viewing.

While the radar charts  show a nondescript jellyfish-like bulge during the day, the line charts show a two-humped Bactrian camel appearance. There is a big hump just before lunchtime on the East Coast, and a smaller hump in mid- to late afternoon. The first bump can be explained by people starting to zone out before lunch, and surfing the web. The afternoon bump is a bit late for the West Coast pre-lunch traffic, but the West Coast pre-lunch crowd may be partially obscured by folks on the East Coast killing a few moments before leaving work for the day.

A smaller bump is evident in the early morning in the Site Visits chart (and you can imagine a similar bump hiding in the Page Views chart). Could this be the pre-lunchtime bump from Europe?

The Friday curve is interesting. It begins the same as the other weekdays, but it lags by midmorning, and by evening it drops to the Saturday level. Obviously people are trying to finish up their week’s work, and aren’t surfing as much. They may be leaving early, and nobody is browsing technical web sites on the weekends.

By midafternoon Sunday, traffic starts to pick up. I suspect this is due to my Asian visitors accessing the site. This traffic is usually drowned out by Europe and especially the Americas, but on Sunday evening (Monday morning to midday in Asia)  it’s the major source of visitors.

A few months ago, Pedro Monteiro of the What Type blog asked What type of events affects oil prices? To illustrate the changing price of oil over the past decade, Pedro built the following bicycle-spoke-like chart: 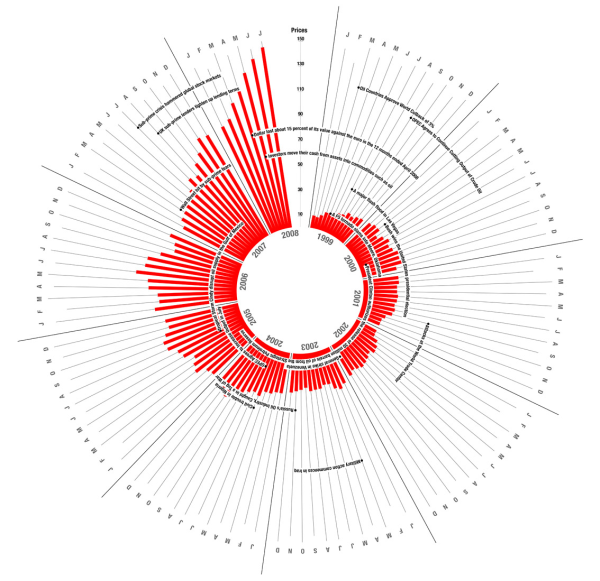 At first glance, the chart catches your eye.This chart was picked up by a number of blogs and other sites which thought this was a great work of visuaization: Flikr, Simple Complexity, and Occasional Roborant, to name but a few.

Upon closer inspection, it is obviously not very effective at displaying its information. There is no basis for the circular alignment, because it does not represent any kind of cycle, annual or otherwise. The resolution is limited to the radius of the chart, or half its height, whereas a simple bar chart would have the entire height of the chart, and thus twice the resolution. The original chart is much larger than this, more than twice as large, so shrinking it has made the labels illegible. It’s hard to tell which dates the labels reference, because some of the wrap far enough to span up to two years. Because of the angular rotation, it is not easy to compare bars that are more than a couple months apart.

I looked up some petroleum price data and a few events, and built a line chart. My data is weekly, not monthly, so the line chart has finer resolution on the time scale. I also have the benefit of several more months of data, covering the precipitous price drop during the last half of 2008. In my chart, the black labels correspond to labels in the rotary chart. The blue labels also relate to labels in the radial chart, which I repositioned to more accurately indicate their occurrence. The green labels refer to other events I looked up to add a few more relevant details. 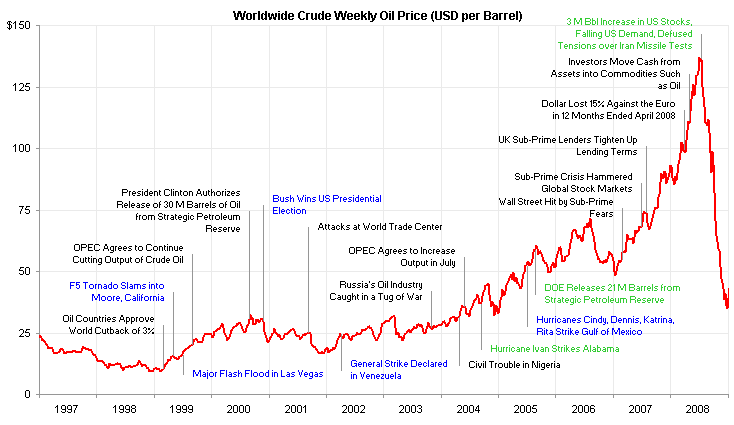 I shrunk the chart slightly to fit the margins, but you can see much more detail. For reference, the shrunken versions of the radial chart and the line chart cover about the same area.

I’m no economist, so I’m not going to try to analyze which events affected oil prices in what way. But I will point out that a simple line chart is easier to interpret, and it leaves more room for clear labeling. If you’d like more information and an informed analysis, you can visit Annual Oil Market Chronology and Current Monthly Energy Chronology at the Energy information Administration of the Department of Energy, or Oil price chronology, a more detailed timeline at Wikipedia.

If you want to examine the data for any periodicity, you could plot it on a radar chart, which is difficult to read. I didn’t even try to apply labels, and I’m sure the peak in July 2008 is hidden by the spiral shape and the position of the peak near the bottom of the chart. 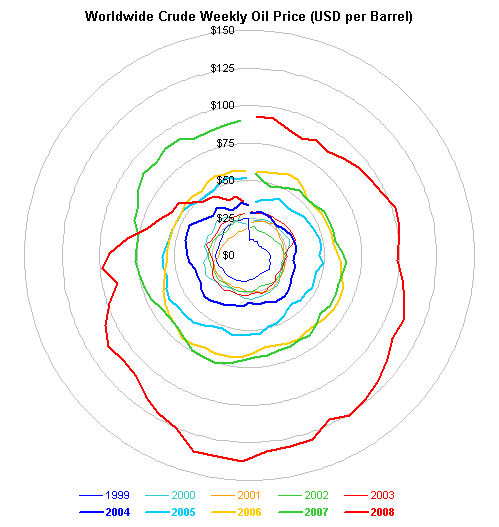 Alternatively you could draw a line chart with a category axis that spans a year. This is much easier to read. The lower prices of the early 2000s are not crunched into the center of the chart like a tangle of yarn. The rise in price which started in 2007 and accelerated in the first half of 2008, and the subsequent drop to 2004 levels, are clearly visible. 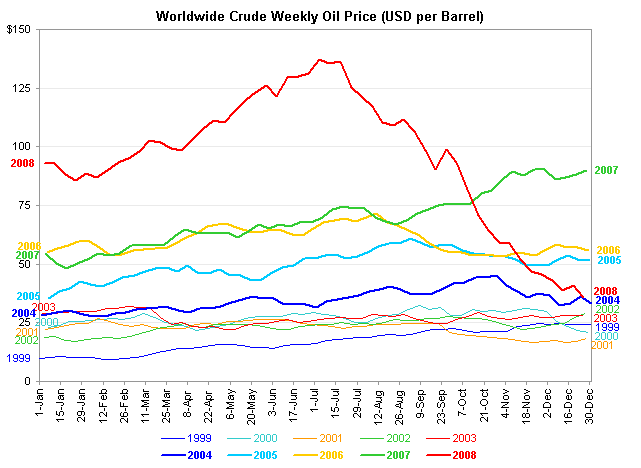 I guess the moral of this story is that simple chart designs are best. Plain, garden-variety line charts are much more effective than the radially oriented bar chart and the radar chart at showing the details of oil prices over the past decade.