This blog has been silent for three weeks, due to a number of other activities. To re-energize the blog, we turn to Chart Busters to clean up some unattractive and hard-to-read charts.

In Ugly Real Economic Growth Chart from Singapore Statistics, an Excel training service shows an ugly chart, then proposes another equally ugly chart as an alternative. Chart Busters will describe these charts, and propose better alternatives. 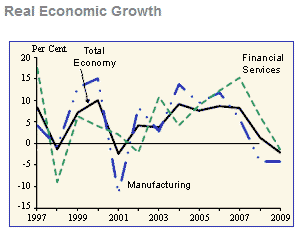 The original chart is not too attractive, though it’s not terrible. It’s a line chart, which makes sense for time series data like this. The main problem with it is the use of several line styles to distinguish the different series. The dashed line for Financial Services isn’t too bad, but the dash-dot-dot pattern for Manufacturing is more distracting than clarifying. The effect of the patterned lines is to make the cluttered data look even more cluttered.

The alternative chart suggested in the article cited above is about twice as wide and twice as tall as the original, so data per pixel is reduced by a factor of four. This would be okay if the chart were four times as easy to read, but it isn’t: many of the chart elements are just several pixels wider than in the original. The chart has somewhat brighter colors than the original, but it’s no easier to read. It has inconsistent text: the title is huge, the Y axis labels are teeny, and at least two different font faces are mixed up within the chart (not counting the title, where a different font may be a good effect).

The data is not presented well in this alternative chart. There is still a line chart for the Total series; filling under this line doesn’t help clarify this curve as much as the author states. The Manufacturing and Financial data has changed from lines to circles with drop lines. Losing the connecting lines removes the clues that help your eyes follow each series and see the trends. The drop lines make the data points look like one-legged stick figures without any arms (actually, they are reminiscent of the denizens of Tralfamadore). The overuse of gratuitous formatting detracts from the presentation of the data.

One minor problem is removal of data labels to a legend separated from the data. Another is the Y axis lacking a marker at 0%. 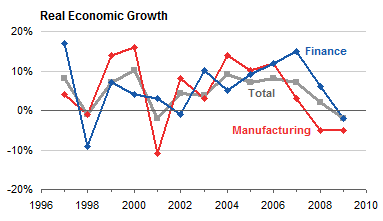 The initial Chart Busters proposal is a line chart like the original, with solid lines for all data series. The chart is a little larger than the original to spread out the points, but much smaller than the alternative above. The data labels have been restored, color coded to match the associated series. The chart is still cluttered, because the data series are intertwined. 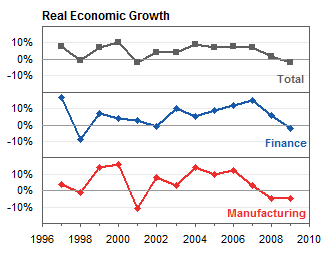 Chart Busters decided to remove clutter in the line chart by converting it to a panel chart. The redrawn chart is taller and narrower than the first Chart Busters chart, with about the same overall area. The series do not obscure each other, yet the shared time axis allows the reader to see where the series move together and where they move separately. The darker gridline at 0% in each panel lets the reader compare positive and negative changes between the series, while the light gridlines and consistent Y axis scales help to compare the relative values of each series.