In a comment to another post, a reader asked about fixing the series names in his charts. Apparently he has been given dozens of charts, and all the series are named Series1, Series2, etc., the default names you see if names have not been defined. It turns out his series data is in rows, and the series names are in the cells just to the left of the data. 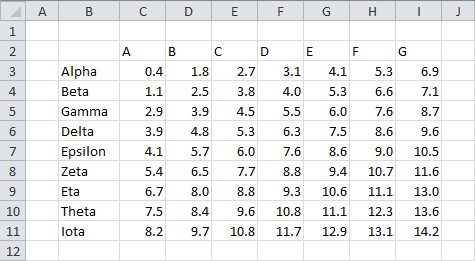 This is what I call “nice” chart data. It’s all in a single block, not bisected by blank rows or columns, with the series names and category labels in the first row and column, and with the top left cell blank. The top left blank cell helps Excel parse the data range into category labels, series names, and values.

If you select such a data range and insert your chart, Excel automatically figures out the series names and category labels. But someone may have selected the range without including the series names, or perhaps the series names weren’t there at first but were filled in after the chart was created.

So here is the situation: 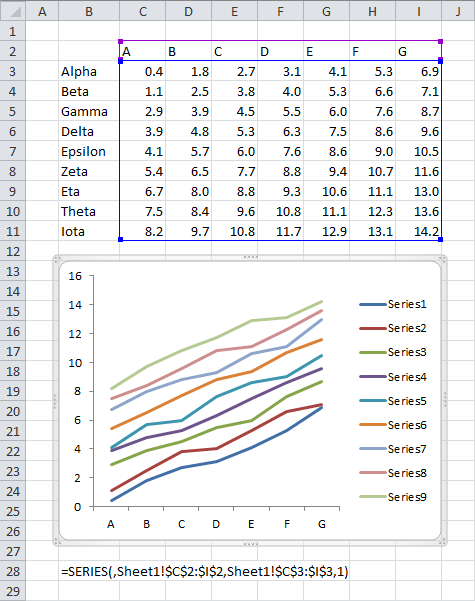 We’re going to use the series formula to figure out the series names. For this series, we can extract the arguments from the formula. To review, the arguments are: Series Names, Category Labels (or X Values), Y Values, and Plot Order. We will determine the range for the Y values, find the cell right before this range, and insert its reference into the series formula where we now have a blank.

The code as scoped out above gets the cell to the left of a row of values, but note that I keep writing “the cell before the values”. We’ll make the code a little smarter than average: it will determine whether the data is in rows or columns, and if it’s in rows, take the cell to the left of this data, but if it’s in columns, take the cell above this data. Good thinking, eh? Burn me twice, shame on me.

Here is the procedure that does all the work. We pass in the series, and it fixes the series formula. The steps taken by the code are:

Okay. We can use this in three ways.

1. To select a series and get the series name for just that series:

For the next two cases, we’ll use this helper procedure, which accepts a chart, and fixes all the series in the chart:

2. To select a chart, and do each series in the chart:

3. And finally, to loop through all of the series in all of the charts on the active workbook: 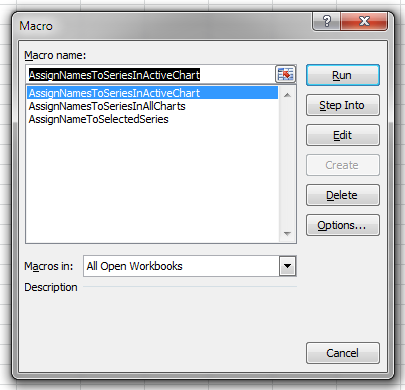 Here is our first chart above after running the code. The highlighted ranges include the green outlined range with series names, and the names are also shown in the legend. The series formula shown below the chart now has a reference to the cell with the series name. 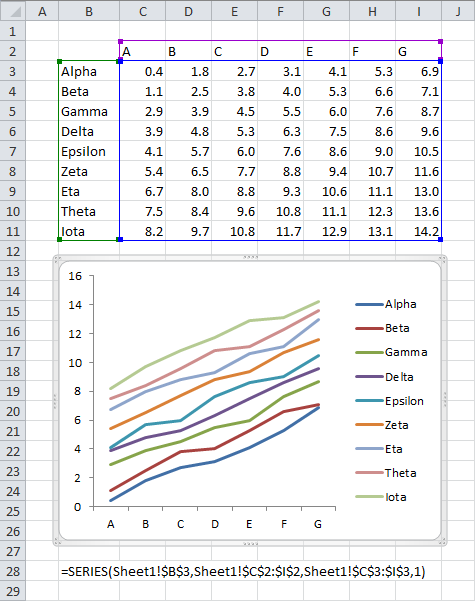 Let’s test the code with the following chart, with data plotted in columns and no series names. Before: 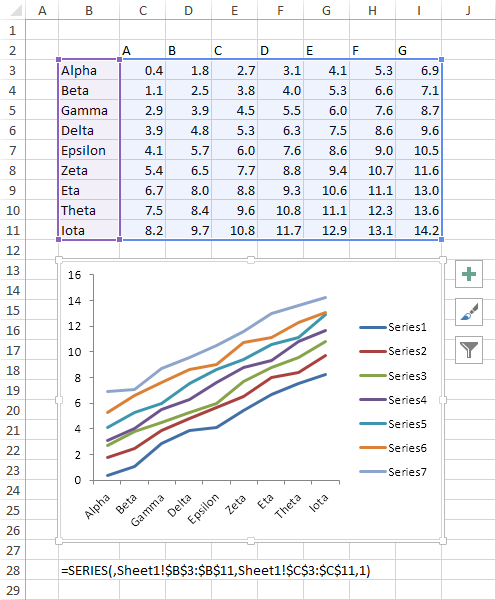 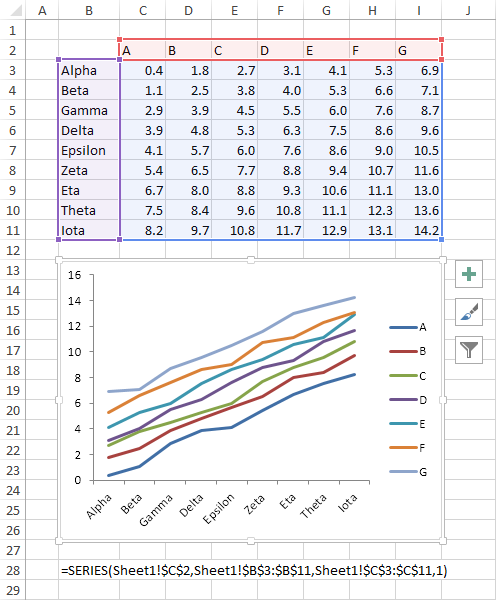 The series names are highlighted in the worksheet and appear in the legend, and the series formula has been updated with a reference to the cell with the label.

The last two screen shots look a bit different, don’t they? That’s because I did the second half of the experiment in Excel 2013. It looks a little lighter, because the row and column headings have no color and the chart outline isn’t so thick and gray when the chart is selected.

The highlighting of the ranges in the worksheet is more pronounced. The outline for the values are still blue, but the line is thicker, and the range is filled in with a light shade of blue. The outline for the category labels is still purple, but again, the line is thicker and the cells are lightly filled. The series name outline has switched from green to thicker red, and the cells are lightly shaded in 2013. I like this more obvious shading in 2013. Back in about Excel 97, I first noticed the outlining after I’d been using it for months. The thin outlines were not obvious enough until I already knew what I was looking for.

Also, when the chart is selected, three icons appear to the right of the chart. These are new user interface bits that handle adding and removing chart elements (the plus sign), applying color schemes and gaudy visual effects (the paintbrush), and on the fly filtering of the chart’s data (the funnel). The first of these icons is a nice addition, putting the chart elements right next to the chart instead of a mile away on a ribbon tab that’s usually not even visible. The middle icon will be too tempting to people who like flashy but nonsubstantive charts. The third icon is actually pretty cool, because you can show and hide whole series, or data points for given categories, just by checking and unchecking boxes in a dialog.