Cynthia makes a mean cranberry-apple pie, and also a black bottom pie featuring a chocolate cookie crust, layers of chocolate and eggnog flavored pudding, and whipped cream. So you could accurately say that Peltier Loves Pie. But not pie charts.

There has been a lot of discussion about pie charts and bar charts lately. See for example

Over the past few years there have been a lot of other discussions about pie charts, mostly advising against their use.

This took place nearly 20 years ago. My metals research group was having our monthly staff meeting, amid rumors of impending layoffs in the company. My colleague Mike started his presentation with a table similar to this showing how he divided his time among various activities during the preceding month:

Then he put up his chart: 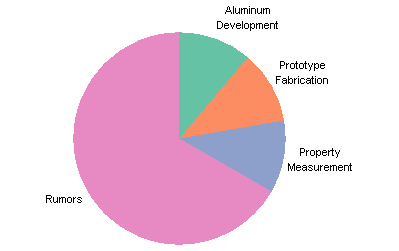 The mismatch between Mike’s chart and his table relieved the tension we all had been feeling for days. Unlike most pie charts, this one was intended to be laughed at.

Pie charts are ubiquitous, and people have the false impression that pie charts are an effective means of conveying numerical information. Research shows that they are not. According to William Cleveland, the effectiveness of different human visualization skills are ranked as follows:

A pie chart relies upon angle (4th in the list) or area (5th). A pie chart also needs different colors for each point, so there may be some unintended weighting of values by color; some colors may be bolder than others, or there may be connotations related to certain colors (e.g., green = good, red = bad).

These examples are provided as much to show the limitations of pie charts as to show how to use them. After all, my first guideline clearly states “Avoid pie charts”, and many experts have weighed in against their use. Below you will see the problem with using a legend, you will see clutter and illegibility when using too much data, and you will see why pies are not good for multiple series of data. In Pie Chart Rounding in Excel I showed a problem in how Excel rounds percentages in pie chart labels.

This is a simple pie chart. Having a separate legend forces the reader to move his eyes back and forth to learn which segment corresponds to which category. 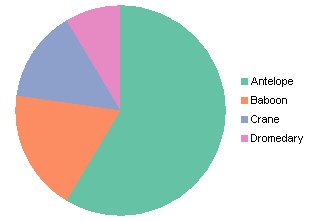 Applying data labels to the segments reduces the amount of time needed for the user to understand which segment corresponds to which category. Here the “Center” label position is used. If I cared more (hey, it’s only a pie chart), I’d move the “Dromedary” label up a bit higher. 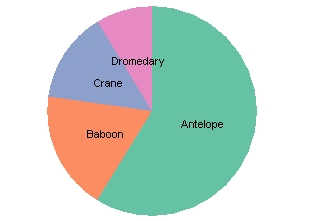 Data has been added to the chart, increasing the number of data points (segments) from four to seven. The labels overlapped badly in the “Center” position, so they were moved to the “Inside End” position, and they are still effective in identifying the segments. However, the labels are getting crowded; we’ve exceeded the maximum recommended points per pie chart, and the label crowding should be a strong hint that we’ve gone beyond the usefulness of a pie chart. 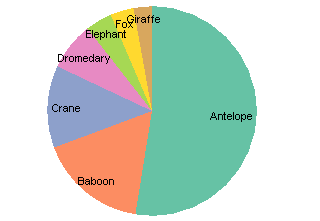 Even more data has been added to the chart, bringing the total to eleven segments. The labels have been moved to the “Best Fit” position, and they don’t fit all that well. Between the first half of “Giraffe” and the end of “Kangaroo”, there is a jumble of overlapping words. 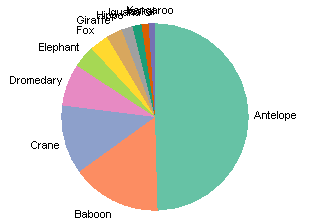 The labels can be manually repositioned, and if they are moved far enough (and if the setting is checked), Excel draws leader lines from the pie wedge to the label. This sounds like a good idea, but it still results in a cluttered chart. In any case, with so many smaller wedges, it is difficult to judge relative values, and if the data weren’t sorted such a judgment would be impossible. Notice that the pie has shrunk to allow room for the labels, further reducing resolution. 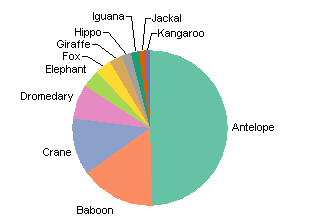 Some of the problems with the cluttered and shrunken pie chart above can be alleviated by removing the labels and adding a legend. We’ve lost clutter, but imposed extra eye motion on the reader to correlate category to pie slice. 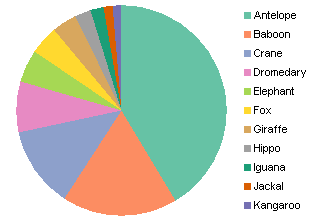 Edit 21 November 2008 – I don’t know why I left this chart out of the mix: the famous 3D Pie Chart. It was in the workbook I used to cook up all of these other pies. 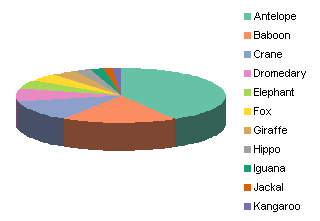 For fun, read my post on 3D Pie Charts

What happens if we want to show two sets of data, for example, last year’s and this year’s numbers? We could show two pie charts:

But the varying orientations of the points make it hard to compare values between pies. We could switch to a donut chart: 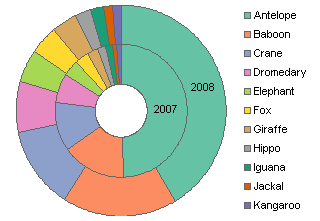 The different areas of the inner and outer rings, and the misalignment of the inner and outer segments, make it hard to compare values. The legend separates the data from the annotation. Neither of these options makes sense for displaying multiple series of data. In fact, I presented a column chart alternative in Column Chart to Replace Multiple Pie Charts.

Coming soon to a feed reader near you: Peltier Goes Bar Hopping, a set of guidelines for bar charts.