This isn’t really about my first Excel 2013 chart. I’ve already made hundreds of charts in Excel 2013 over the past couple years, and I’ve found a lot of nice enhancements over the last two versions. You could modify and format Excel 2003 charts much more efficiently, but with much less effort the charts in 2013 look nicer significantly nicer than those in 2007, and extremely nicer than typical Excel 2003 charts.

Let’s take a short stroll through Charting in Excel 2013.

These examples will use the following data. 8 rows and 8 columns of numerical values, plus a row of Greek letter names above and a column of Latin letters to the left of this grid.

Plus that all-holy blank cell in the top left, which will help any version of Excel parse the data into values, category labels, and series names.

Select one cell or the whole data range, and click on the Insert tab. Here it’s been shrunk to fit, but click on it and you’ll see it full size in a new browser tab.

Let’s focus on the Charts group within the Insert tab.

Looks pretty much the same as ever, except for the addition of “Recommended Charts”. What’s that look like? 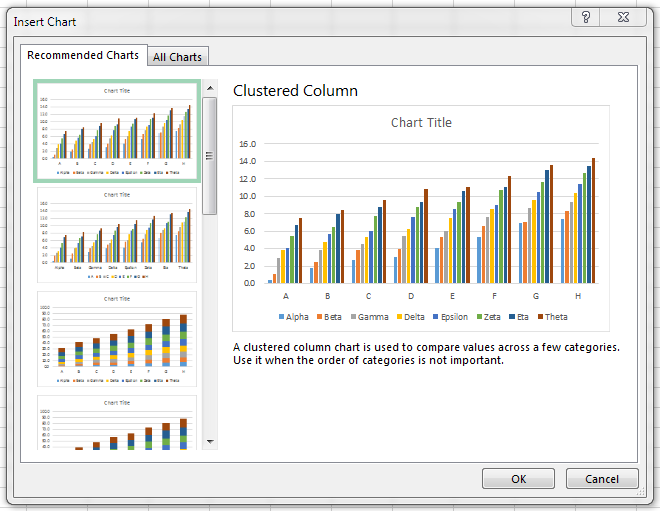 This takes a peek at your data and proposes some chart types that might suit the data. Our data has text labels above and to the left of the data, so we get several variations of stacked and unstacked bar and column charts, with thumbnails of each.

We can click on the All Charts tab to select from the entire Excel chart cuisine. 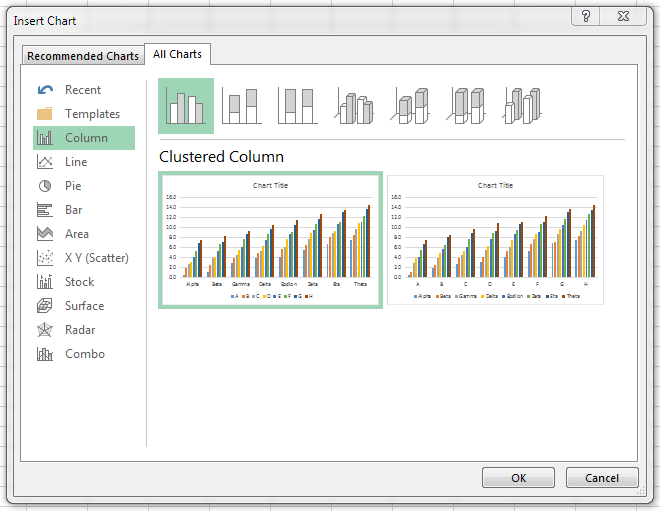 The default as always is the clustered column chart. We have two choices, plot by rows and plot by columns. 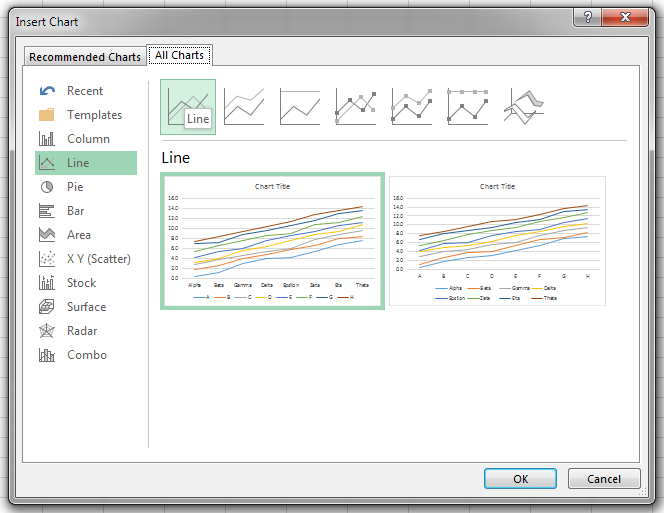 Again, two choices: data in rows and data in columns.

When I saw this dialog for the first time, I happened to move my mouse over one of the thumbnails, and I got a larger preview. Nice touch. 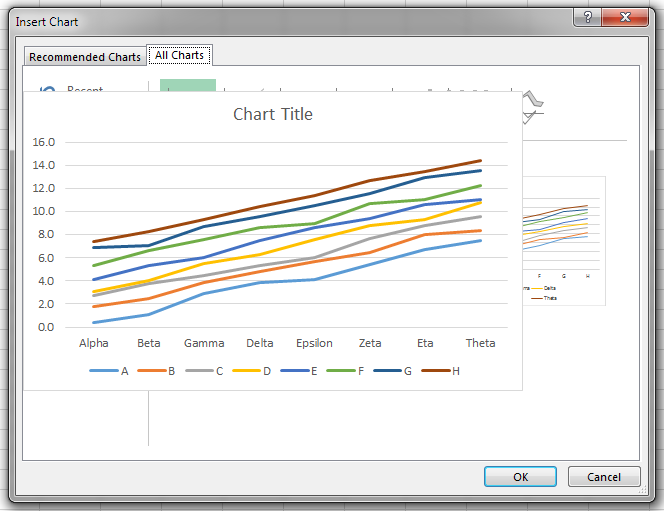 You can also get to the Line Charts dialog from the bottom of the line chart dropdown on the Insert tab of the ribbon. 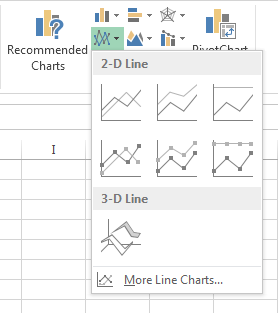 And here’s my first line chart. The defaults are pretty nice. The gridlines are lighter (they were black in all previous versions of Excel), and the other lines and text are slightly muted. The default colors have changed from Excel 2007 and 2010: they seem a bit richer. I want to look at this chart. The series lines aren’t as thick as Excel 2007 and 2010, so the chart looks less like your first grader drew it with crayons.

The worksheet ranges used in the chart are highlighted, as in previous versions of Excel. But in previous versions the highlights were thin borders around the ranges, and to tell you the truth, I’d been using Excel 97 for several months before I noticed the outlines and realized what they were for. Here the lines are a bit wider, and the ranges themselves are filled with a faint tint of the outline color. The category labels are purple and the values are blue, like in previous Excel versions, but the series names have changed from green to red (though 8% of Excel users may never notice this change). 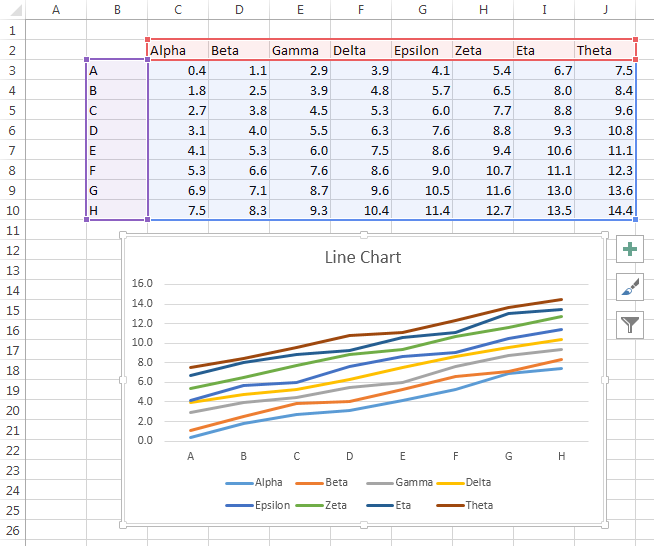 When the chart is selected, three icons appear to the right of the chart. These are new user interface elements that let you adding and removing chart elements (the plus sign), apply color schemes and gaudy visual effects (the paintbrush), and filter of the chart’s data on the fly (the funnel). The first icon is a nice addition, putting chart element controls right next to the chart instead hiding them on a ribbon tab that’s usually not even visible. The middle icon is an attractive nuisance, too tempting to people who like to sex up their charts. The third icon is way cool, because it lets you show and hide entire series, or data points for given categories, just by clicking on checkboxes.

I’ll tell you all about these icons in an upcoming post.