A common question in online forums is “How can I show multiple series in one Excel chart?” It’s really not too hard to do, but for someone unfamiliar with charts in Excel, it isn’t totally obvious. I’m going to show a couple ways to handle this. I’ll show how to add series to XY scatter charts first, then how to add data to line and other chart types; the process is similar but the effects are different.

This is a trivial case, and probably not what people are asking about. But I’ll cover it just for completeness.

If I have a single block of data, I can select the block of data, or just a single cell within it, and Excel will build a chart using all of the data. The first column (if series are plotted by column) is used for X values, the rest of the columns become the Y values, and the first row is used for series names. 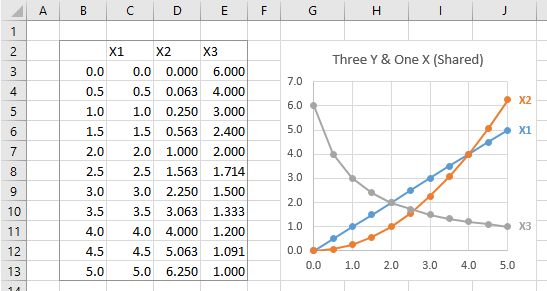 Select Series Data: If I somehow have a chart that uses only part of the data, I can right click on the chart and choose Select Data, or I can click Select Data on the ribbon, and the Select Data Source dialog pops up. I can then edit the Chart Data Range, either by manually editing the address, or by selecting a different range, to update the chart. 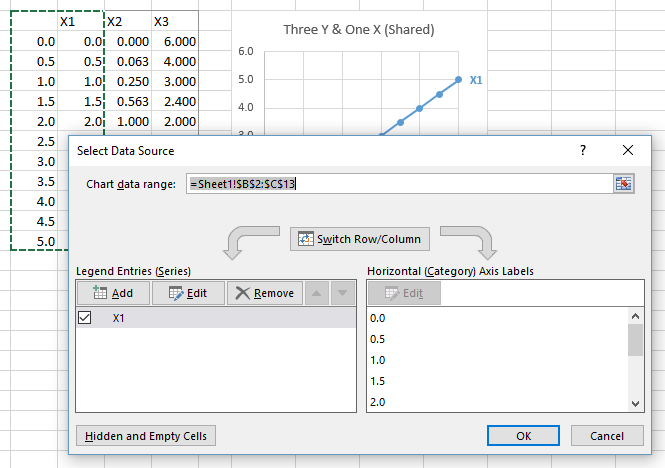 Highlighted Chart Data: But it’s even easier to do without the dialog. If I select the chart, I can see the chart’s data highlighted in the worksheet.

I can click on any of the handles on the corners of the highlighted ranges to stretch the amount of data used in the chart.

Note: The default Excel chart has a legend, and I’ve replaced it with color-coded data labels on the last point of each series in the chart. When new series are added, they would also be listed in the legend. In my sample charts above, I had to add the data label every time I added a new series. What a pain, you say? Not really. In Peltier Tech Charts for Excel, one of the most used features adds a label to the last point of a selected series, or the last point of every series in one or more selected charts. A relates feature matches the label color to the plotted series.

It’s not as easy to manipulate your chart’s data when the data resides in separate blocks of data, such as this:

You have to start by selecting one of the blocks of data and creating the chart. 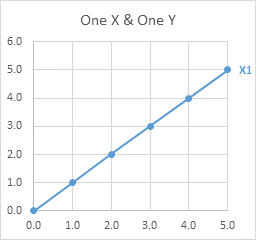 Select Series Data: Right click the chart and choose Select Data, or click on Select Data in the ribbon, to bring up the Select Data Source dialog. You can’t edit the Chart Data Range to include multiple blocks of data. However, you can add data by clicking the Add button above the list of series (which includes just the first series). 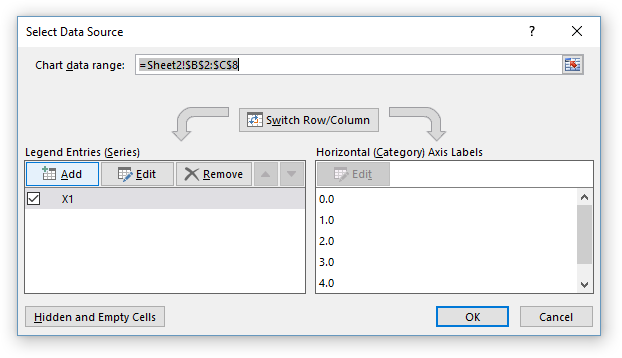 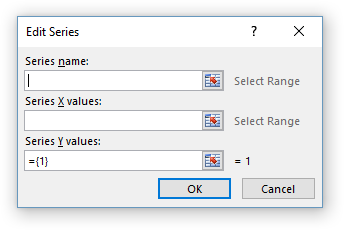 Select ranges for each of these… 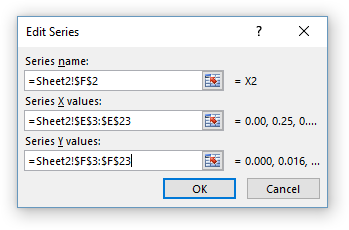 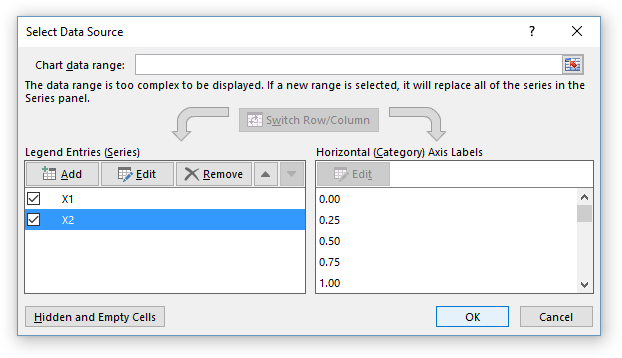 The chart now has two series. Note that in an XY Scatter chart, each series can have its own X values, independent of the other series in the chart. 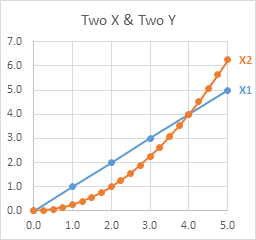 Repeat as needed to fully populate the chart.

Not too bad, but I’m not a huge fan of the Select Data Source dialog. It just seems like too much work. And like the expansion of data within a single range that I started this article with, there’s a faster and easier way to add data to a chart from different ranges. 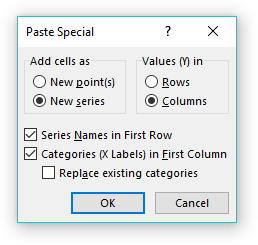 Make sure that the settings in the dialog are correct: Values (Y) in rows or columns, series names in first row, categories (X labels) in first column.

The Replace Existing Categories setting would replace existing X values with those being pasted, which makes little sense for an XY chart that already has X values defined. We’ll talk about this setting when we discuss Line charts. For XY Scatter charts, I never ever check this box.

Click OK and the chart has a new series.

Copy the next range, select the chart, Paste Special. 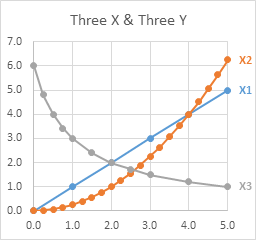 Again, in an XY Scatter chart, each series can have its own X values, plotted along the same X axis scale, independent of the other series in the chart.

This is pretty easy. It’s even easier to use Paste instead of Paste Special, but sometimes Excel guesses incorrectly on those row/column, first row, first column settings, and you’ll have to undo the Paste and do Paste Special.

I’m using Line charts here, but the behavior of the X axis is the same in Column and Area charts, and in Bar charts, but you have to remember that the Bar chart’s X axis is the vertical axis, and it starts at the bottom and extends upwards.

When your data is in a single block, a Line chart works just like the XY scatter chart. The first column (if the series data is plotted in columns) is used as X values, or more accurately, X labels; the rest of the columns are used as Y values. The first row is used for series names. 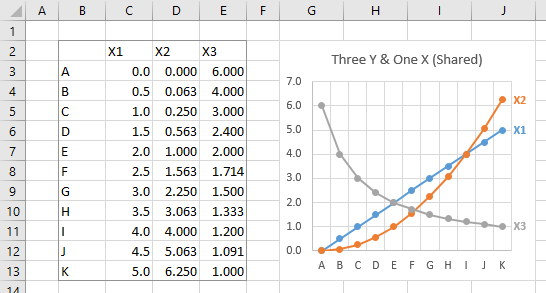 When there are multiple blocks of data, Line charts still work mostly the same as XY Scatter charts. Let’s look at this simple data. 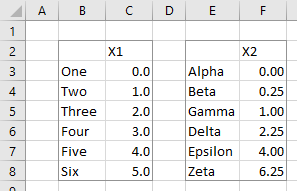 Start by creating a Line chart from the first block of data. 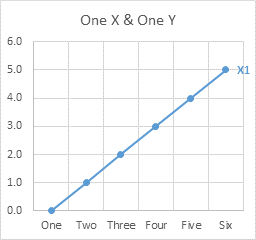 Select Series Data: Right click the chart and choose Select Data from the pop-up menu, or click Select Data on the ribbon. 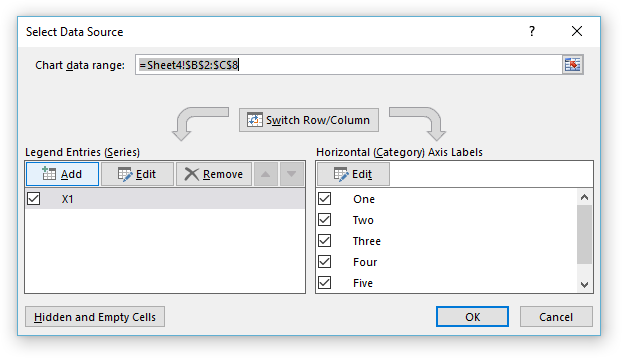 As before, click Add, and the Edit Series dialog pops up. There are spaces for series name and Y values. 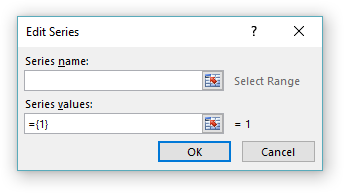 Fill in entries for series name and Y values, and the chart shows two series. The original X labels remain on the chart. 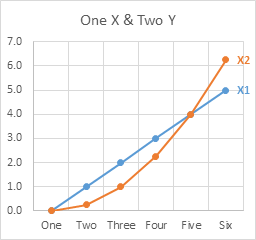 This dialog differs from the one seen when adding data to an XY Scatter chart, because there is no place for X values (or X labels). To change the X labels, click the Edit button above the list of X labels in the chart. The Axis Labels dialog appears.

Change the range in the Axis Labels dialog, and all series in the chart now use the new X labels. 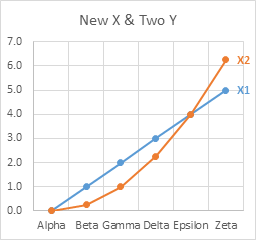 The differences between Line and XY Scatter charts can be confusing. What is important is that the data can be formatted the same (markers or no markers, lines or no lines), while the X values are treated differently (numerical values in XY Scatter charts, non-numeric labels in Line charts).

Copy – Paste Special: As in XY Scatter charts, adding data to Line charts can be faster and easier with Copy and Paste Special than with the Select Data dialog.

Check the settings in the dialo: Values (Y) in rows or columns, series names in first row, categories (X labels) in first column. If Replace Existing Categories is unchecked, the original X labels will remain in the chart. Click OK to update the chart. 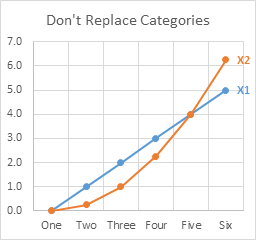 The X labels specified in the first series formula is what Excel uses for the chart. If we had selected only the new Y values, ignoring any new X values, and kept Categories in First Column unchecked, both series formulas would reference the same X label range.

Here is what happens when we check Replace Existing Categories. 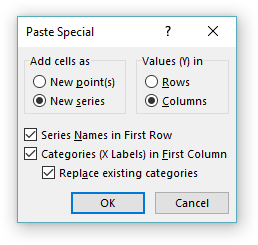 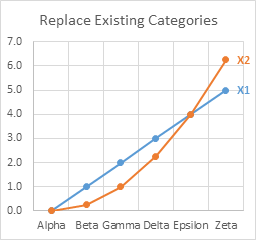 This usually isn’t what I want, so I almost never check Replace Existing Categories for any chart type.

The behavior even becomes stranger when we use mismatched data ranges. The second range below has many more rows than the first. 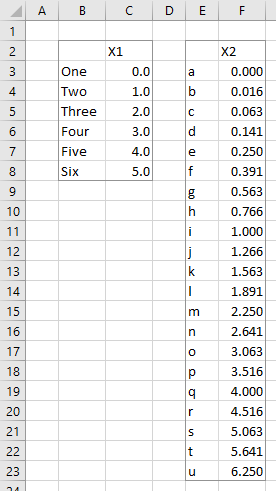 Here is the chart if we paste special with Replace Existing Categories unchecked. Both series use the same X labels, so the axis has enough spaces for the longest series. Since the first labels are being used, these fill the first part of the axis, overlapping excessively, while the rest of the axis remains unlabeled. The first series is pushed to the left of the chart along with the axis labels, since it only uses a fraction of the X axis labels.

Here is the same chart if we paste special with Replace Existing Categories checked. Both series use the new X labels, which fill the entire length of the axis, and they don’t overlap excessively since I wisely used one-character labels. The first series is again pushed to the left of the chart, since it has many fewer points than the second series. 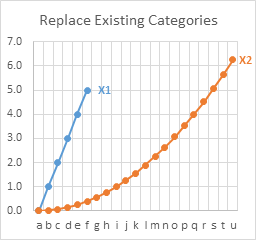 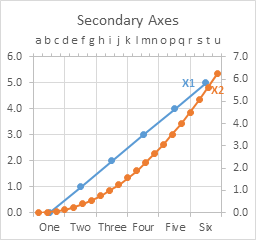 You can try to do a little rescaling of axes to make the chart look better. Here I set the same maximum and minimum values for primary and secondary Y axes. I also formatted the Axis Position to On Tick Marks for both primary and secondary X axes: “One” lines up with “a” and “Six” lines up with “u”, and fortunately there are the right number of categories that each category on the primary scale lines up with a category on the secondary scale (“Two” with “e”, “Three” with “i”, etc.). This alignment was a happy accident. 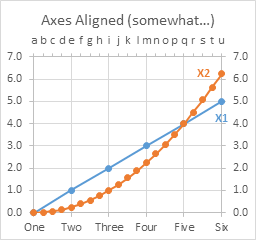 I hardly ever have a secondary X axis on a line chart, since there is usually no relationship between the two sets of labels, but our eye insists on seeing such a relationship. I’ve written about this confusion caused by Secondary Axes in Charts, even when applied in a well-meaning way.