Apparently there has been much criticism of this chart. On the one hand, it is eye-catching. On the other, it does not clearly show anything without a lot of mental gymnastics. If you view it at full size, you can at least read the numeric labels in the margin, but reduced to fit into a medium sized monitor, it’s illegible.

The iGraphics Explained blog posted an attempted clarification of and justification for this beast in Data Visualisation and Quantitative Easing explained by Ciaran Hughes in the Daily Telegraph. The explanation said

On the left we can see the ‘running total’ of the value of assets purchased, against the ‘monthly total’ on the right hand side, keyed at the top of the graphic.

I think the reader is able to understand the depth of the financial stimulus package, and when.

Right. I showed this picture to an unbiased bystander (my wife, who has a PhD in the biological sciences and who now teaches math and science), and asked how well it showed monthly and cumulative spending. Her initial response: WTF!!??

As I pointed out, you can only see the running and monthly totals if the text labels are legible. A table without the pretty distraction in the middle would be an improvement, if only because the numbers are not spaced out by the nice colors. 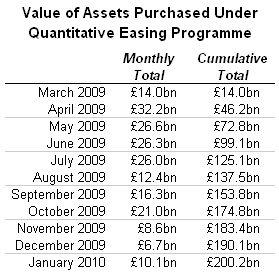 Of course, seeing numbers in text form is not the same as truly visualizing the data. A bar chart is a major improvement over the table and over the fancy illustration at the top of this article. 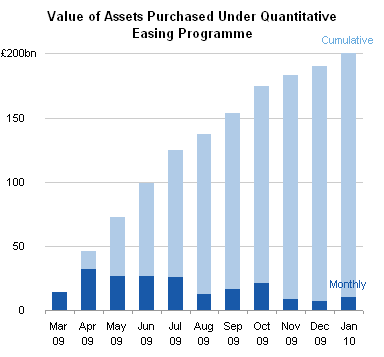 If you want to see, or emphasize, the month-to-month trend, which was the intent of the original illustration (i.e., the “Easing” of government support), a line chart is the best option. You can readily see the negative slope of the Monthly data, and the decreasing slope of the Cumulative values. 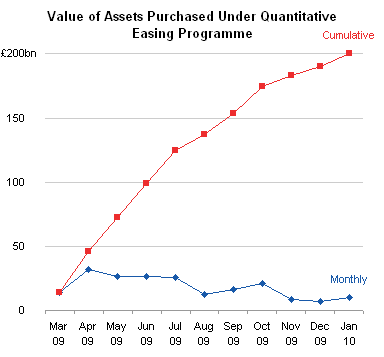