Nathan Yao of FlowingData has presented us with a chart from New Scientist which asks How Long Will the World’s Natural Resources Last? The graphic is a typical magazine infographic which uses nice colors and strange effects to try to get across a point. 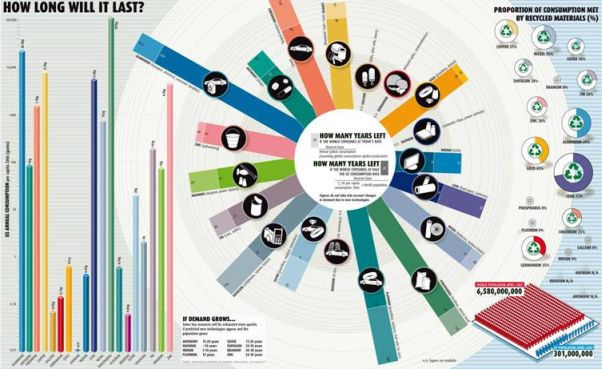 The bar chart of consumption rates is not straightforward: it uses a log scale and thus has no zero baseline. The bars are narrow, which fortunately minimizes the 3D effect. I’m not sure what real purpose is served by this chart: it shows a single rate of depletion (US; the rest of the world is not shown) which has no context without some measure of existing reserves.

The recycling donuts not only show a proportion based on recycling, they also show something based on diameter or area of the donuts. They have replaced the confusion over whether diameter or area encodes a variable with confusion about what this variable even is. I don’t believe the 0% for recycling of platinum: when working in the laboratory, we saved all thermocouple wire and electrode foil and turned it in for credit at the lab supply office.

The central starburst is basically another bar chart with a logarithmic scale. The scale isn’t labeled; I only noticed it after a while, when I realized the unequally spaced concentric circles were more than mere decoration. There is no reason for the circular/radial pattern other than to take up more space with this information than necessary. As I’ve discussed in Spiraling Down the Drain, Replacement for an Oil Price Radial Chart, and Radar Charts are Ineffective, there is no need for circular charts, even if there is an underlying cyclic pattern to the data.

Some readers of Nathan’s post pointed out that these predictions by nature are never very accurate, since technologies change, leading to increased r reduced demand for given materials, and new sources of rare materials are discovered, and known sources which are not economically infeasible may become feasible through increased market value or through advanced in extraction technology. Estimates of consumption and of reserves are also mere swags, and often misstated for political purposes.

Matt the Caveman Forecaster wrote about this graphic in World’s Natural Resource Depletion Forecast Graphic. He did not care for the radial chart which is the focus of the infographic. Matt normalized the remaining reserves so today’s reserves are represented by 100%, and used a simple line chart to show when we will supposedly run out of each resource. 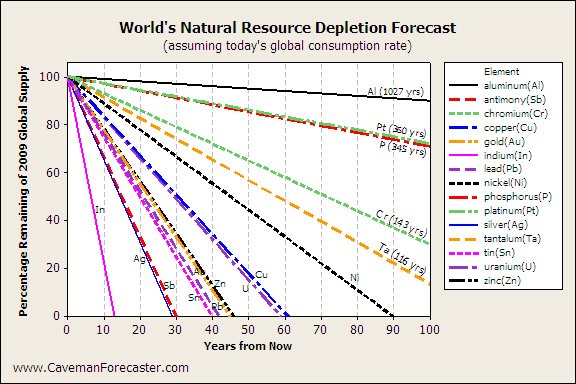 Matt saved me the trouble of making this chart, very nice of him. If I had made it, I would have made the chart a little larger, and probably closer to square. I’d have removed the legend, made the lines solid and less bold, and made the labels more distinct. But even if someone were to apply the gaudiest 2D formatting, it’s still easier to understand than the New Scientist original.

Information displays capture attention when they include colors and eye-catching features. The magazine version of this infographic effectively draws attention to itself: has plenty of color, and the starburst draws attention much as an asterisk in a printed page of text. Unfortunately trying to use the asterisk shape as part of the quantitative display has ultimately reduced its effectiveness at transferring data from the designer to the reader.

Information is most easily understood when simpler displays and chart types are used. When a display type—the radial chart—is invented for the purpose, and gratuitous unlabeled features—the logarithmic scale on the concentric circular gridlines—are added, comprehension is delayed or even prevented.

The dilemmaremains: how to attract attention effectively, then take advantage of this attention to effectively display a set of information? If you are simply trying to show some general trends or have your viewers take away some general impressions, then the requirements are less strict, and elaborate graphics may be sufficient. The Circos type illustrations Nathan shared with us in Visual Representation of Tabular Information – How to Fix the Uncommunicative Table is a nice example of this. You can onle read semi-quanitative information from it, but the circos patterns help you see relationships between items which would be more difficult to show through more conventional means.

The New Scientist visualization featured at the top of this post is less informative than confusing. The line chart described by Caveman Forecaster, and a bar chart showing comparative recycling rates, are so easy to comprehend but by themselves do not sparkle enough to attract the attention of disinterested passersby.

I’m not a graphical designer, so I have no tricks in my portfolio. How can comprehensible charts be made more likely to be read?