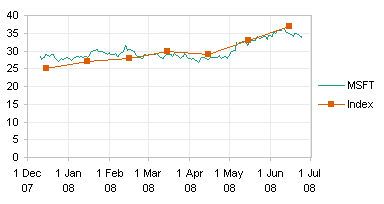 As far as the appearance of the series is concerned, you can use XY or line types interchangeably. Either chart type accommodates lines or no lines, markers or no markers. You don’t have to use a “Line” chart just because you want your markers to be connected by a line. The difference between Line and XY charts is in how the X values (dates) are presented on the chart.

Before we get into the actual construction of these combo charts, let’s compare the treatment of dates in Line and XY charts in Excel.

Let’s start with some simple data:

Select A1:B3, and insert a line chart. Copy D1:E4, select the chart, and use Paste Special to add the data as a new series, series in columns, series name in first row, categories in first column. 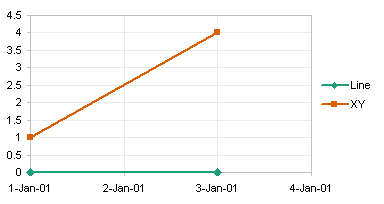 I have formatted the date scale axis as follows. The base unit is Days. The box for “Value (Y) Axis Crosses Between Dates” is unchecked. Any other formatting is up to the user.

Right click on the second series, choose Chart Type, and select the XY type with straight lines connecting the markers. Excel changes the chart type and puts the series onto the secondary axes. 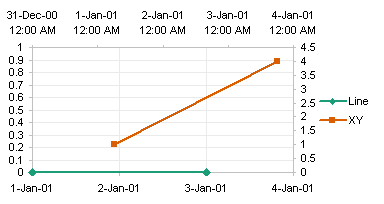 We want both series on the primary axis, so right click the XY series, choose Format, and on the Axis tab, choose Primary. The series line up appropriately.

Be aware of the “Value (Y) Axis Crosses Between Dates” setting. If you have not unchecked the checkboxbox, the axis crosses between dates, so instead of crossing at midnight on 1-Jan-01, it actually steps back a half day and crosses at noon on 12-Dec-00. The axis maximum moves forward a half day, to noon on 4-Jan-01. The tickmarks and gridlines are no longer located on midnight between dates, but at noon of each date. The Line chart points still are plotted at midnight and the XY points at the appropriate times, but the positions of the tickmarks and gridlines make it look like the 3-Jan-01 6 PM point is plotted somewhere on 4-Jan-01. 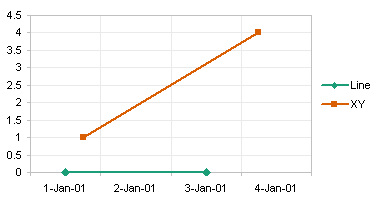 Prior to Excel 2007, the date-scale axis was referred to inaccurately as a time-scale axis. Since the data in a line chart can only be plotted by date, not by time, the nomenclature was changed in Excel 2007.

This brings up another way that Excel 2007 has broken charting functionality. In Excel 2003 and earlier, if you wanted to specify a time or date in the axis scale dialog, you could enter your value as a time or date. This is so much easier than figuring out the day number and the fractional time. But in Excel 2007 you are forced to enter 36892 and 36895 as the secondary axis limits.

Here is the chart in Excel 2003 using the Excel 2007 primary and secondary protocol. 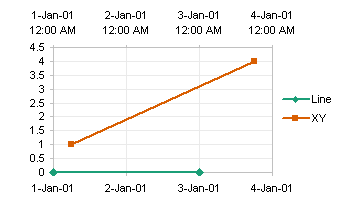 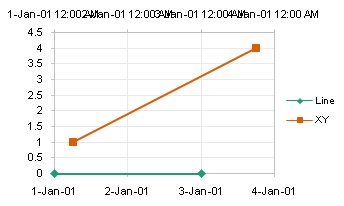 Let’s look at another chart, which uses the following data, which has values across months.

Here is a line chart of two series, constructed using the exact same protocol as the earlier example. Although the second series uses dates that are different from those defined by the first series, these different dates are ignored. 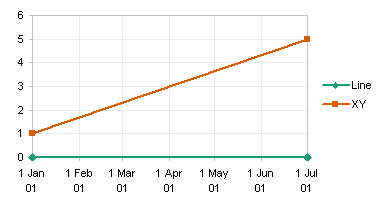 I have formatted the date scale axis as follows. The base unit is Days, the major unit is one month. The box for “Value (Y) Axis Crosses Between Dates” is unchecked. If you look closely, you can see that the months do not all occupy the same distance along the axis: February is noticeably smaller than January and March.

The second series is converted to the XY type, and it is moved back to the primary axis (see below). Now its endpoints fall on the intended dates. 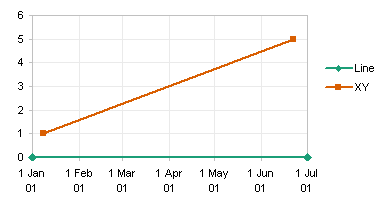 For our final example, let’s look at daily stock prices and monthly market index values on the same chart. This chart is constructed the same as the previous two examples, by inserting a line chart with two series, and applying the appropriate formatting to the date scale axis. The exact data isn’t important: I downloaded the stock data from Yahoo and made up the index data. 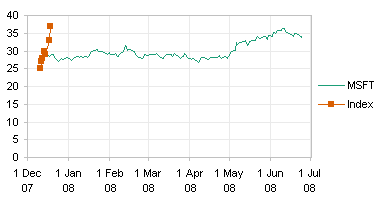 When the Index series is converted to XY and plotted on the same date scale axis as the stock price (line chart) series, it lines up appropriately.