Here’s a problem that I’ve heard people ask (and complain) about. They’ll have data in their workbook, neatly sorted from top to bottom. When they make a bar chart, the sorting is reversed, with the Bottom data appearing at the top of the chart. Not only that, but the series are in backwards order too. If they sort the data in reverse order, the chart’s categories look right, but now the worksheet is upside-down, and the series are still in the wrong order. 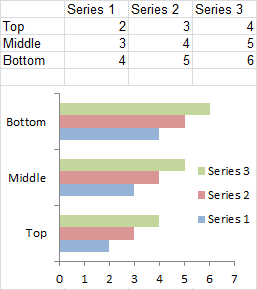 The reason for this arrangement is logical, once you figure it out. To illustrate, let’s start with this data. Yes, the data in column A is mixed up. Instead of 1-2-3-4, it goes 1-3-2-4, to help illustrate differences between XY and Line charts at the same time.

Here is an XY chart made from this data. Looking at Series 1, we see it starts at X=1, proceeds to X=3, then X=2, and finally X=4. No surprise, since it’s following the data, which as I pointed out above, is in mixed up order. 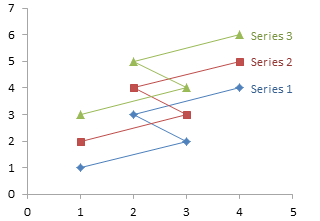 Big deal, no surprises. But let’s look at the chart axes for a moment, and review 4th grade math.

By default, the two axes will be located along the bottom and left edges of the chart. Where the axes intersect is called the origin, and it is where both axes have their minimum values (we’re dealing with non-negative data). Lower values are plotted closer to the origin, and higher values further away.

Let’s make a Line chart with the same data. It looks different from the XY chart. No, the series are formatted the same, with markers and lines. But check out the horizontal axis. The numbers are not sorted numerically, they are listed in the order they appear in the worksheet, as if they have no numerical value. In fact, in line, column, area, and bar charts, Excel treats X values as non-numeric labels. (Unless the X values are dates, and I’ll cover that another time.) 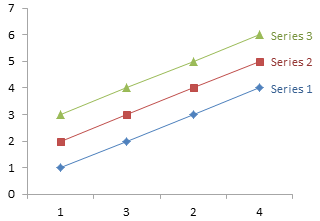 Okay, easy enough. In a line chart, Excel lists the X axis labels in the same order as in the worksheet, and the origin is at the bottom left of the chart.

Same with a column chart. Note in the column chart that the order that series are clustered is also the same order as in the worksheet. 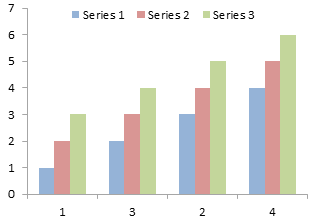 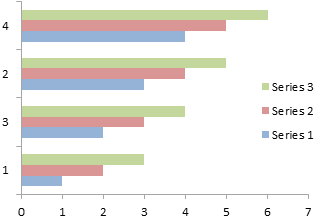 If you really need the chart to be arranged the other way, it’s a simple two-step fix. First, format the vertical axis, and check the box for “Categories in reverse order”. 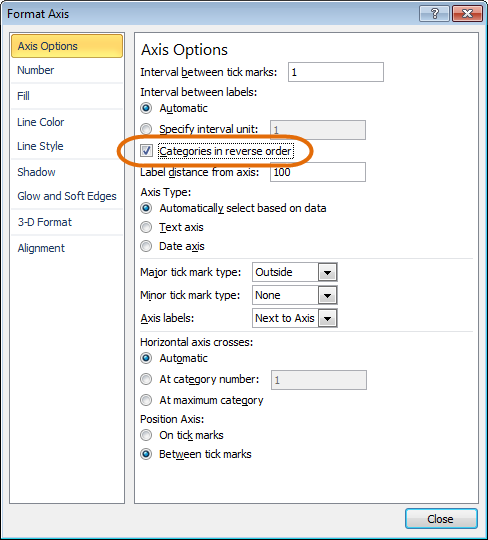 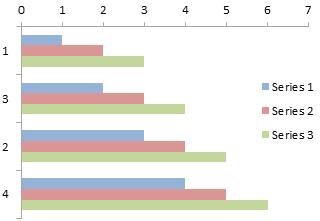 If you want the horizontal axis back at its customary bottom position, format the vertical axis again. (You can do this step at the same time as the earlier Format Axis step.)  Select the option button for “Horizontal axis crosses: At maximum position.” 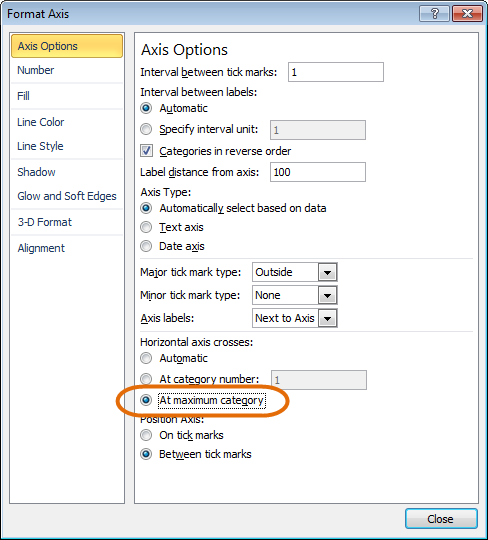 Since the vertical axis maximum is now at the bottom, that’s where the horizontal axis appears. 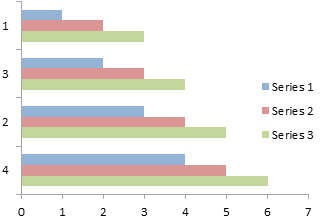 Now we know enough to go back and fix the original chart. Format the vertical axis, reverse the category order and make the horizontal axis cross at the maximum. 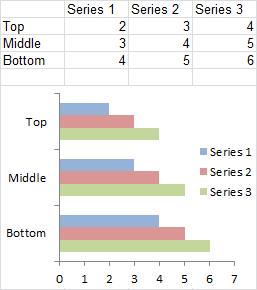 Top is Top, Bottom is Bottom, series are plotted in 1-2-3 order, and we can finally rest easy.