Column Chart with Primary and Secondary Axes:
Use a Panel Chart Instead

What People (Think They) Want:
Column Chart with Two Axes

Let’s use some simple data to illustrate the situation. Here the Secondary data is more than an order of magnitude greater than the Primary data.

When plotted together on a single axis, we can’t tell much about the Primary data, because it is overshadowed by the Secondary data. 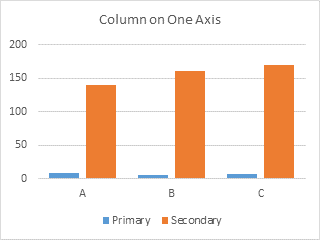 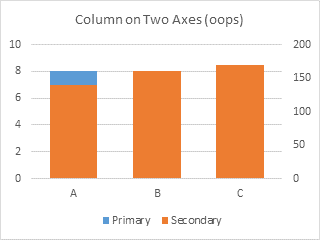 Now the Secondary data really obscures the Primary data. This is where people usually get stuck with their chart.

Of course, it’s possible to add dummy series to the chart to provide adequate spacing. 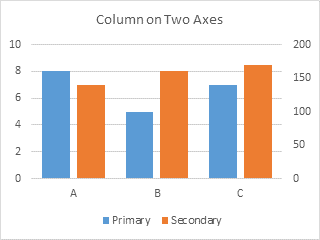 I’ve found that plotting data on two different axes makes it hard for the reader to determine and recall which axis goes with which data. It’s even more confusing with bars that alternate between axes. No matter how you try to clarify the chart, using axis labels that coordinate with the data (shown below), using arrows (not shown), people still mix them up. 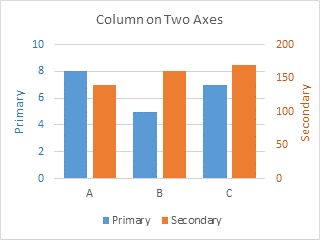 This is added to the usual confusion with two axes. I’ve had people (smart people, mind you) look at the chart, and their takeaway was that Secondary started lower then Primary, but finished higher.

Ah, the perils of a chart with primary and secondary axes.

What People Really Should Use:
Panel Chart

It’s okay to use primary and secondary axes in the same chart, but to avoid confusion, it’s best to separate them into separate panels of the chart. This is the protocol for creating such a panel chart.

We’ll use the same data. 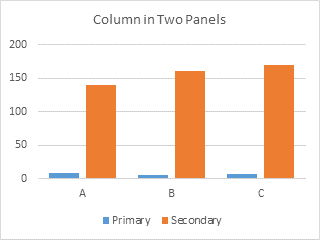 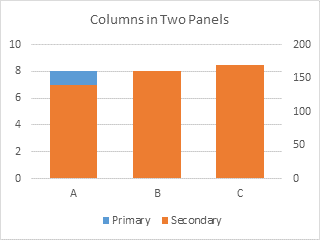 Format the primary and secondary vertical axes according to these computations. If you use a major unit of 2 for the primary axis and of 40 for the secondary axis, both sets of labels line up with the primary horizontal gridlines. 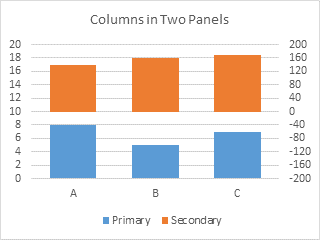 If conditions are not specified, the first condition is positive numbers and the second is negative number, leaving the third for zero values.

This makes the custom number format for the secondary axis very easy:

The custom number format for the primary axis is not much more difficult, now that you know the system:

Format the primary and secondary axes in turn, and assign the applicable custom number format to each. 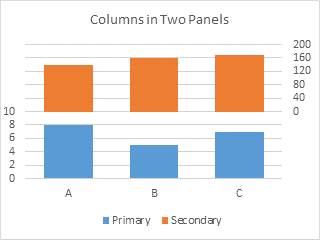 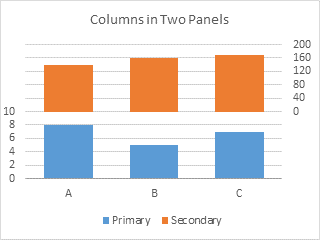 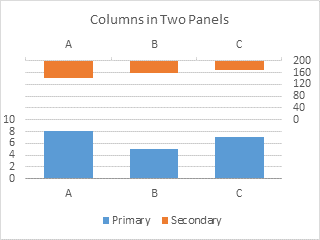 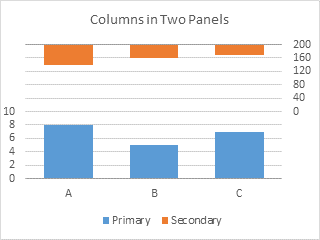 Format the secondary vertical axis (right side of chart) so the horizontal axis crosses at the automatic position (zero). 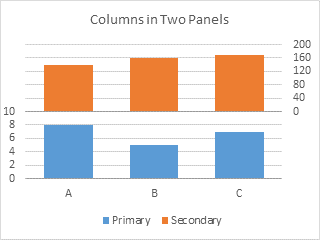 Nobody says you need to keep the original aspect ratio of your chart. You can make it narrower (more so for fewer bars) and taller. You can also adjust the size of the plot area to minimize the white margins around the plotted data. 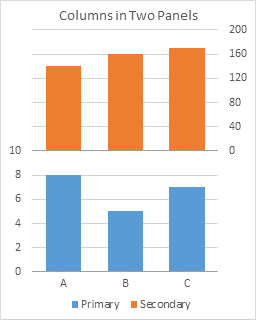 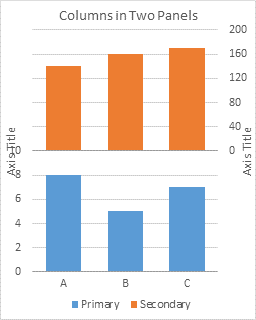 Excel centers these axis titles along the sides of the chart. You can drag them so they are centered on their respective panels. You’ll probably also have to readjust the plot area. 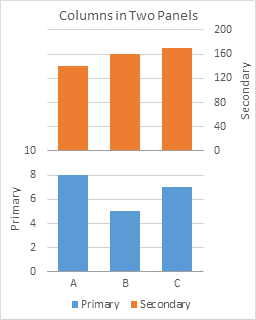 Making the panel chart seemed like a lot of steps, but it’s really not more steps than making any chart with primary and secondary axes, and it’s fewer steps than the gymnastics needed to put columns on two axes with appropriate spacing.

Adding data is also easier for the panel chart. If I add a series to the column chart with two axes, it throws off the spacing provided by the dummy series, and I’ll need to adjust the number and arrangement of blank series in the chart. 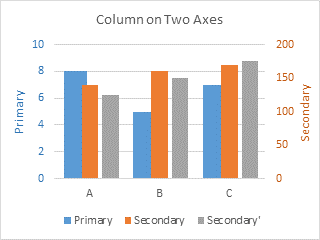 But I’m not going to bother. Instead I’ll add the data to my panel chart.

So copy the new data, select the chart, click on the Paste button of the Home tab (the Copy button in 2007!), and add the data as a new series.

The data is added to the secondary axis. 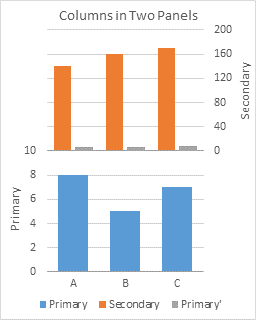 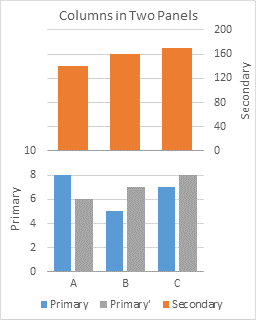 If the new series belongs on the secondary axis, you’re already done. 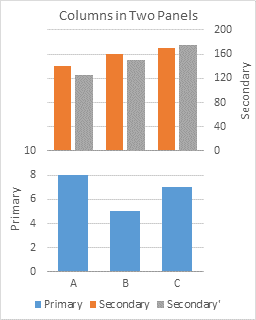 If you add multiple series, and they belong on both axes, well, just move the appropriate ones to the primary axis. 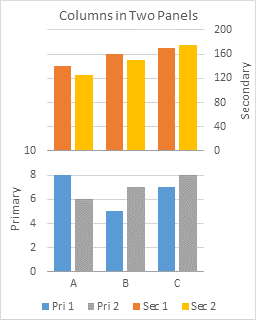 If you need primary and secondary axes, it’s easy to use panel charts to produce charts that avoid the confusion that overlapping axis scales can cause.