Excel offers a great many different chart types. Many of these are 3D types, which should be left off the palette of any serious data technician.

Here is a simple cross-tab table of data, showing how the strength of an experimental alloy varies as a function of alloy chemical composition and test temperature. In a former life I was a metallurgist, and this data was going to change the world.

The experts insist that line charts should only be used along axes that plot numerical variables, and not for categorical factors. That’s a little strict, and in this case, the Chem and Temp variables do change monotonically from low to high at nearly regular intervals.

The much-maligned UI Ribbon introduced in Excel 2007 isn’t the worst ribbon in Excel. Among the most pointless 3D charts Excel offers is the 3D line chart, or “ribbon” chart, shown below in a handful of arrangements.

The data regions of the charts are shrunk because of the need to put all the third dimension infrastructure in the chart. This loss of resolution is rendered moot by the distortion caused by the perspective view.

It’s impossible to see where the “ribbons” lie with relation to the axes, or how they are positioned with respect to each other. And if the ribbons are aligned edge on to the viewer (see below right), they become nearly invisible.

The data labels on the lines in the 2D charts above make identification of the series very easy. It’s much harder to get labels positioned nicely in these 3D charts (I know, I tried and gave up). We have to use a legend, and the chart above right shows one problem with legends: the series are arranged purple to blue from top to bottom, while the legend entries are arranged blue to purple from top to bottom. Our eyes forced to move side to side to relate data to label, and our brains are forced to think about this backwards correlation, leaving less cognitive power to actually analyze the data.

Differences in plotting order can make the charts even worse. Left: strength for all temperatures is the same for chemistry factor 4; right: strength for all chemistries approaches the same value at the highest temperature. These conclusions are not borne out by the boring but accurate line charts above, nor by the tabulated data.

In the first 3D area chart below, the Temp 1 data obscures all the rest. In the second, the data in back is exaggerated because the unseen but progressively higher baselines of each plank are hidden by the areas in front. Blocking of rear data by front data occurs in 2D area charts as well, the the perspective and varying baseline is the third dimension’s contribution to this obstruction.

This 2D column chart isn’t a terrible way to show the data, though the taller bars make following the shorter series more difficult. This wasn’t a problem with the line charts. 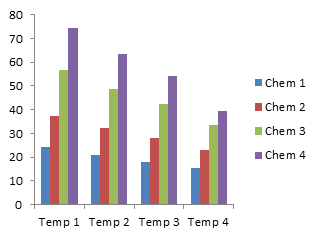 There are two ways to make a 3D column chart. Left: keep all of the 3D bars in a 1D arrangement, so it’s just a 2D chart with thickness, and the resulting distortion. Right: arrange the vertical bars in a 2D horizontal grid, so the perspective distortion is made worse by bars in front hiding bars in back.

In the charts above the bars in front were only obscuring the baselines of the bars in back; in the charts below, which result from factors being shown in the opposite order, entire bars disappear in the matrix.

Wait, It Gets Worse

Who needs rectangular columns when you can use cylindrical columns? Very pretty. 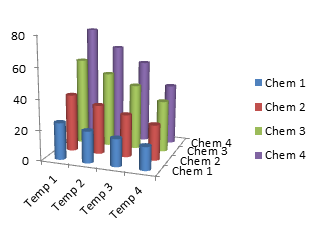 You can further distort the data by using bottom-heavy cones and pyramids.

You can also make truncated cone and pyramid charts, formed by starting with shapes of the same height, and cutting them off at the height representing their values. The heights are no easier to read than in the pointy charts above, but perhaps you can estimate the areas of the cross-sections to help judge the values. Hmm, except areas increase as values decreases, and values changes in proportion to the square root of the area (that is, proportional to the width of the area).

All of the 3D charts shown above suffer from distortion. In the chart below, I’ve hidden the data, and made the borders of the walls visible, and added gridlines. No two lines anywhere in the chart are parallel. It’s very artistic, with lines extending to the vanishing point and all, but that only makes the data more difficult to judge. If you look at it long enough, the back corner suddenly changes, so it’s sticking out of the page. A chart showing your hard-earned data is no place for optical illusions. 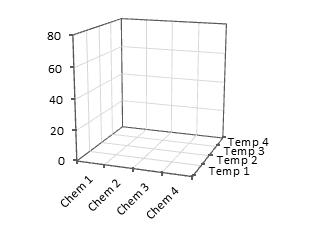 So many of Excel charts can get very fancy, even without using gratuitous visual effects, such as shadows, gradients, glows, and transparencies. The 3D charts shown here are certainly fancier than the plain old 2D line charts at the top of the article, but not a single 3D chart shown here depicts the data as clearly as the line charts.