I’ve written many blog posts and web pages on Dynamic Charts. See Dynamic Chart Review for a summary and Archive of ‘Dynamic Charts’ for an archive of the Dynamic Charts category on this blog. What they have in common is that they rely on you to define dynamic ranges in the worksheet, and then assign these dynamic ranges to the chart source data. Not too bad if you’re doing one or two series or a couple of charts, but after a while the tedium can turn your brain into mush.

What do 99%* of the dynamic charts ever created have in common? They are used for sets of data that stretch with time as more rows are added. In the examples cited above, there are other categories of dynamic charts, but those are much less common.

* Don’t tell anyone, but this is one of the 96% of statistics that are made up on the spot.

In the classes I teach I always start with an easier way to make dynamic charts for expanding or shrinking data sets. To answer a question the other day, I looked up the link to my blog post on this topic, and I couldn’t find it. So I had to write something, and here it is.

If you are using Excel 2003 or later, it is remarkably easy to create a chart that depends on a data set with a varying number of rows. The technique makes use of a feature introduced in Excel 2003 called the List, which was enhanced and embellished in Excel 2007, and renamed the Table. When Excel 2003 came out, the new List was the awesome killer feature that made me immediately upgrade to 2003. Unfortunately, neither Excel 2007 nor 2010 has such a feature, for me anyway.

The chart SERIES formula updates as the List/Table changes size, making Lists/Tables ideal for many dynamic charting purposes, and here I’ll show you how that works.

Let’s start out with this typical made-up data set. It has columns of data, X and Y values in this case, and a row of headers.

To create a list in Excel 2003, press Ctrl+L (L for List). Excel guesses what range you want to use and whether that range includes headers. The guess is almost always what you expect. 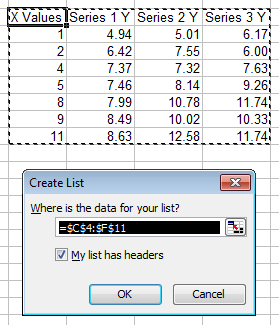 To create a Table in Excel 2007, press Ctrl+T. You can also use Ctrl+L: they didn’t mess up any Excel 2003 users by changing the shortcut.) The dialog is the same, except it now calls the List a Table. 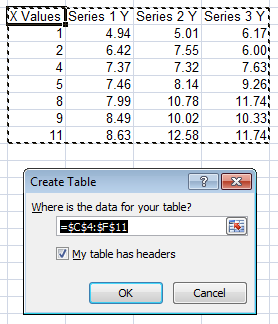 When the active cell is within the List, the thin blue border becomes a thick blue border, Autofilter dropdown arrows appear in the header row, and the list expands by one row, giving you a data entry row denoted with a blue star in the leftmost cell. Any formatting and formulas are filled down as you enter data into this row. When you enter data in this row, the next row becomes the new record row. As you add rows to the List, any data below the List that would be overwritten is itself shifted down by one row.

The bottom right corner of the List has a small gray backwards “L” shape, which you can drag the change the dimensions of the List. You can click and drag on the thick border to move the List around the worksheet.

Here is the same data, converted into a new Table in Excel 2007. There is no border highlighting the Table, but the Table takes on the default Table formatting. A bit much, but that’s what Excel 2007 is all about. The bottom right corner of the Table is indicated with a small blue backwards “L” shape, which you can drag to change the dimensions of the Table. You can click and drag on the (unseen) border of the Table to move it around the worksheet.

Here is an Excel 2003 XY chart that uses the data in our Excel 2003 List. It is created like any Excel 2003 chart: select the data and run the Chart Wizard. 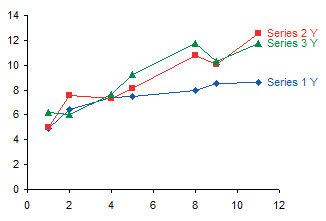 Here is an Excel 2007 XY chart that uses data from our Excel 2007 Table. It is created by selecting the data and choosing the chart type from the Insert tab. 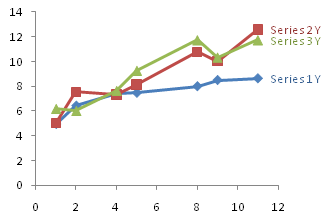 When the Excel 2003 chart is selected, you can see the chart source data highlighted in the List. Green (top row) denotes series names, purple (left column) X values, and blue (the bulk of the List) Y values.

When the Excel 2007 chart is selected, the Table is highlighted the same way, but the highlighting is a bit difficult to make out with all that shading in the default Table style.

No problem, I created my own lightly formatted Table style, and applied it to my Table. Now the highlighting shows up clearly.

To illustrate this wonderful behavior of Lists and Tables, I placed formulas in a row above the Excel 2003 List that calculate the sum each column of Y values in the List. This works identically in Excel 2007. The formula includes all data rows in the List, from 5 to 11. 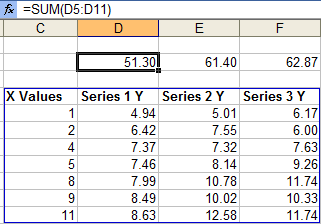 I expanded the list by entering a new row of data. Without any further effort on my part, the formula updates to extend to row 12, the new bottom of the list. 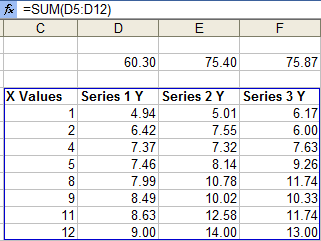 Here is my Excel 2003 chart from above, after the List was expanded. Each series extends one point further, plotting the data in the new row. 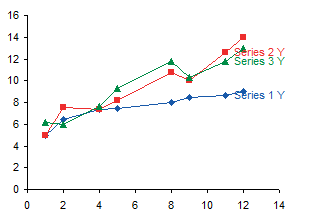 Here is the corresponding Excel 2007 chart, which now includes data from the new row in the Table. 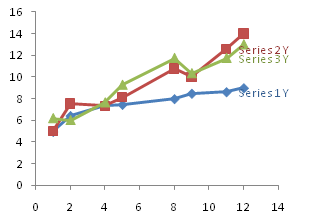 The data labels in these charts are attached the the previous last point in the series, so the new point and line segment partially obscure the labels. No problem, simply rerun my Label Last Point routine to move the labels. Here’s the fixed up Excel 2003 chart. 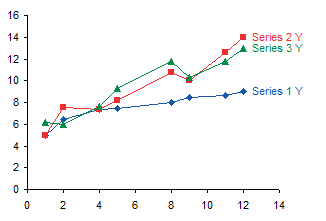 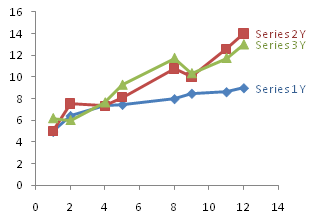 Here is the Excel 2003 chart of the original List, with Series 1 Y selected to show the chat SERIES formula. Note the X and Y values include rows 5 through 11. 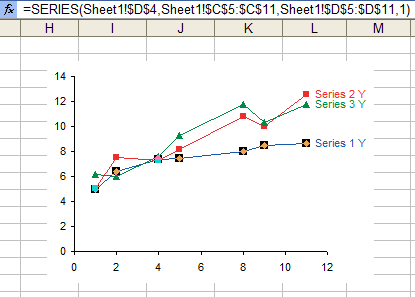 Here’s the same chart and the same chart SERIES formula after the List is expanded. The X and Y values now include rows 5 through 12. The Excel 2007 behavior is identical. 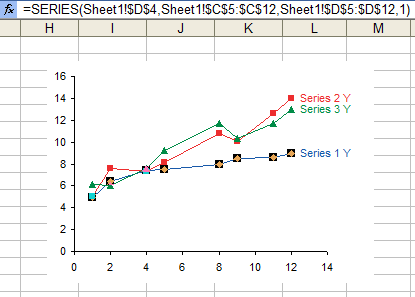 No discussion of dynamic charts in Excel is complete without a description of charts that use Lists or Tables as their source data.  It is so much easier to use Lists or Tables than dynamic names to make charts respond dynamically to the number of rows in your data.

I certainly claimed that I would post more, but there have been some circumstances beyond my control. I had to struggle to get even this one post completed this month.

Here is a plot of January’s actual high and low temperatures (dark gray bars) compared to their typical values. To all you Celsius people, water freezes at the top of the light gray bars.

Guess which morning we awoke to a malfunctioning furnace. I’ll give you a hint: see that blue diamond on January 24th, at -9°F? It got down to 47°F in the kitchen before the faulty intake compressor was replaced. Fortunately the upstairs furnace was fine.

Here’s a plot of January’s snowfall, daily totals as blue bars, and cumulative total as a dark blue line. I didn’t provide a plot of wind, but we get a lot, which means 6 inches on this chart represents 6 inches that fell on the driveway plus 6 inches that blew onto the driveway from the lawn. Each bar represents one to three hours of shoveling and snowblowing, hours I could have been blogging. The exception to shoveling hours is the total of 21.1 inches on January 12th, which was four hours plus spent clearing the driveway by my wife and two daughters. The night before and the day of this storm I drove the 12 hour round trip to Rochester to deliver my other daughter back to school, because her flight the day before had been canceled. That’s two days I couldn’t spend blogging.

Note: these charts were generated using the above technique, from an Excel 2003 List of data scraped from the accuweather.com web site.