In Blue Ribbon Interface I summarized and provided links to a number of recent articles which were critical of Excel 2007’s new Ribbon interface. In his thoughtful comment, my colleague Dennis bemoaned the emotional content of the cited articles, saying one cannot love or hate tools, only individuals. My argument is that I become emotionally involved with any tool I spend a majority of my working hours working with, and the nature of this emotional involvement ranges from positive for tools which are pleasant to use, to negative for tools which frustrate and confuse. This post is an attempt to discuss shortcomings in Excel 2007’s redesigned dialogs objectively, with examples showing good and bad designs, and with a minimum of whining.

Microsoft has violated its own published user interface guidelines that it offers to designers. Ironically I cannot find the same version of these guidelines that I remember: they came out during the Vista beta program, and have since been edited and re-edited, and moved from place to place on the Microsoft web site. However, these guidelines were well stated and even seem to be based on our knowledge of human cognition.

The first interface design guideline I will discuss is that whenever possible the interface should show all options which are available to the user. For example, the Excel 2003 Format Axis > Patterns tab shows all axis tick options, allowing us to use our vast image processing capability, rather than load the options into short term memory: 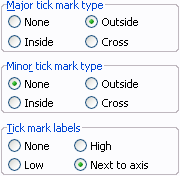 In contrast, the Excel 2007 Format Axis > Axis Options dialog shows only the currently selected axis tick options. Sure, I “know” the other choices, because I have formatted hundreds of thousands of chart axes in my Excel experience. But I still have to stop to think what these options are, or click on each dropdown in turn to remind myself.

The dialog in 2007 is smaller than that in 2003, but it is not as self-explanatory, and isn’t the 2007 dialog larger anyway? (See below for an analysis of dialog sizes.)

The second interface design guideline states that controls for tasks or subtasks that are done together should be placed in proximity to one another. My “good” example here is the Excel 2003 Format Series > Patterns dialog, which contains the options for Area (Fill) and Border for area, bar, and column charts, and the options for Marker and Line for line and XY charts. For an XY chart, for example, the controls for selecting markers, line styles, and colors appear on a single screen: 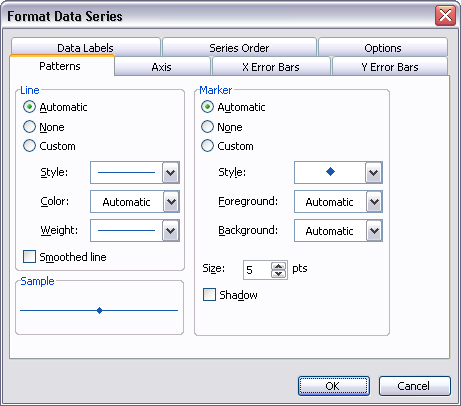 Excel 2007 provides a “bad” example for this guideline. The same options as above require the Excel 2007 user to jump between SIX different views: Marker Options, Marker Fill, Line Color, Line Style, Marker Line Color, and Marker Line Style. There is a lot of empty space on these six panes. When various preliminary options are made, this space fills with the various formatting options (gradients, fills, etc.) which were added to Excel 2007. These options would be more effectively added as child dialogs, as they are not used as much as “plain” formatting; in fact, many would say that their use runs contrary to good charting practice. Relegating fancy formatting to child dialogs would enable the separate items to be once again combined onto a single dialog view, and suppress the urge to add chart-junk formatting to charts. 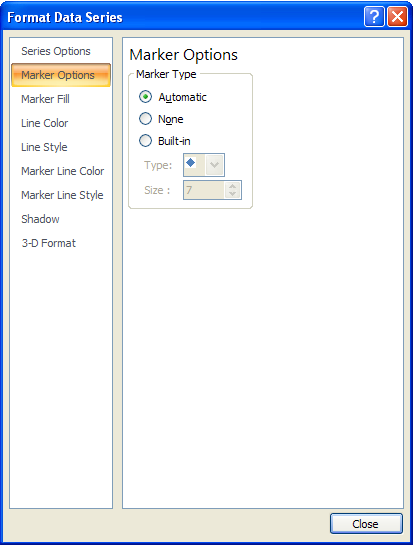 It is worth a brief digression to examine the old and new dialogs. The Excel 2007 chart formatting dialogs appear a lot larger then their 2003 predecessors, but the practical increase in size is mush smaller.

I’ve reduced the images of the dialogs to 66% of their original size, outlined the working region in red, and highlighted the dialog client area in yellow. 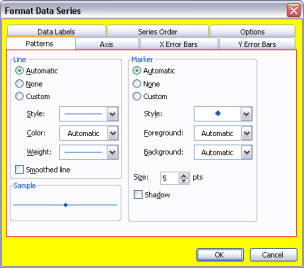 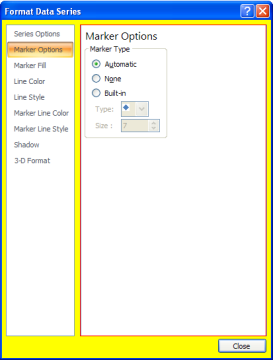 The Excel 2007 dialog is 20% larger than the 2003 dialog, and the client area (yellow) is 22% larger. However, the working area (red outline) is only 6% larger. Most of the increase in area is consumed by the “tabs”, which are compactly arranged in 2003 and displayed in a list in 2007 which fills at most half of the space given to the list. (So there is  plenty of room in the list to restore missing tabs, such as Error Bars and Data Labels.)

If the area of the 2003 dialog were made as large as that of the 2007 dialog by increasing its height, it would have 22% more space to accommodate enhanced formatting, not 6% for formatting and 16% for empty space. 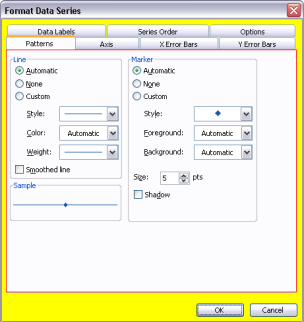 The Excel 2003 Format Axis > Scale dialog is an elegant example of interactivity that makes a user’s job easy. Clicking the checkbox or its label changes the value of the cheeckbox. Clicking also changes focus to the box with the value and highlights the entire value, saving the user a click and drag. For example, I can change the minimum from 0 to 1 with two minor actions: click on the Minimum checkbox, then type 1. Also, the value entry boxes are always enabled, so I can click on one anytime. If I change one of the values and the checkbox is checked, it automatically unchecks itself.

One change in the 2007 version of the Axis Scale dialog may even be an improvement. Often inexperienced users would enter a desired axis scale value i the box above and then click Auto, which then told Excel to use its own value and ignore what the user entered. Giving the user a choice between Auto and Fixed may clarify the definition of “Auto” in this context.

The improvements end here, and the functionality is decreased. First, notice that the entry boxes are disabled if the Auto options are selected. This means the user cannot just highlight a value and overtype a new value to change to a fixed value. The user mush select Fixed first. Selecting Fixed, unlike in the 2003 version, does not give focus to the value entry box, nor select the current value. This forces more mouse actions on the user.

This lack of interactivitiy compared to the earlier version of the dialog indicates a few things to me. First, there was a lack of familiarity with the dialog among the design team. Second, there was a lack of resources to implement the dialog completely (which was evident during the technical preview phase). Another sign of a hastily implemented 2007 dialog is that the Fixed option buttons are all one pixel higher than the corresponding Auto option buttons.

My colleague Dennis has pointed out in a comment to Blue Ribbon Interface, my recent post summarizing user complaints about the Excel 2007 Ribbon interface, that this interface is version 1.0, and that we should expect improvements in version 2.0. I agree completely that the 2007 interface is not mature, though I consider it more of a 0.9 version.

I expect changes in the Ribbon, but I fear that other aspects of the interface design, such as dialogs which reduce productivity as much as or more than the Ribbon, will remain in version 0.9 in the next release of Office. The Ribbon is a new innovation, receives a great deal of attention, and will likely see a great deal of development. On the other hand, dialogs are an old technology, not considered worth deploying scarce resources to improve.