Nathan Yau of Flowing Data provided the inspiration for my first chart makeover as part of the Chart Busters program. Nathan asks, and answers, the question Does this Calorie Intake Infographic Work? Not Really. As Nathan says, the chart is “creative and visually appealing”, but it just doesn’t work.

The chart in question is a big round circular mess, posted on Flickr by Petra Axlund of 5W Infographics. Below is a smaller version of the chart, but you can see the original in all of its glory by clicking on this one. 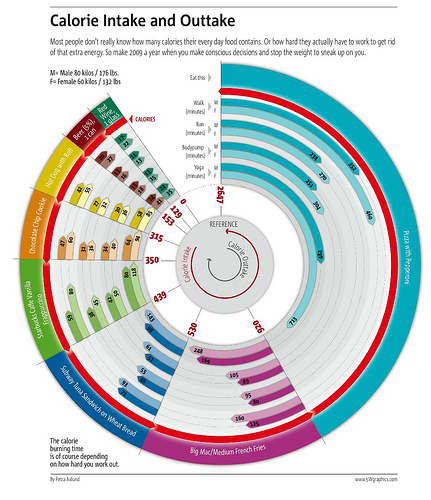 The chart is eye-catching, but not very informative.

So what’s wrong with the chart?

There’s a problem with arc length vs. value. The longer arcs, that is, those representing the longest times, are also on the innermost rings. This distorts the story. It also looks like the 304 arc, minutes for a woman to bodypump off a pizza, looks like it covers a larger area than the 352 minutes is takes a man to walk off the same pizza. The 105 minutes for a woman to burn off a Big Mac and fries looks as long, or nearly as long, as the 125 minutes for a man to walk it off. Since at first glance it’s hard to tell if this is an error, or due to the arcs and different radii.

For a while I didn’t know whether the calorie counts for the food all started at the inclined edge next to the cut-out. But after careful examination, I think the calories of each section are added to the previous sections. This removes any possibility of gauging values from a common baseline.

Some of the color schemes are hard to interpret. Black numbers on the dark brown beer arrows, and even the balck on dark purple Big Mac arrows, are difficult to read. And these numbers are important to read, because the lengths of the arrows are meaningless. This means the chart without the numbers is not self-sufficient.

The hard to read numbers and the out of scale arrows reduce the credibility of the chart. One other thing bothers me as well. Are those 2647 calories for the whole pizza? When’s the last time you saw a non-teenager eat a whole pizza? Or a teenage girsl?

Finally, it is impossible to do any adjustment of items on this chart. How would you account for a larger individual (who burns more calories per minute), or for onion rings instead of fries, or for biking instead of walking? Impossible.

By the way, what’s bodypumping? Some new age kind of weight training? Or do I really want to know?

How can we improve on the chart?

You don’t need all those numbers. An XY chart with clear axis scales is a large improvement. Instead of drawing completely separate graphical elements for each food item, why not draw some simple lines showing calories expended vs. time for the different exercises? Then draw a line corresponding to the caloric value of the food item, and you can pick off the times required to burn off its calories.

Here is a version with calories plotted horizontally and exercise duration vertically. 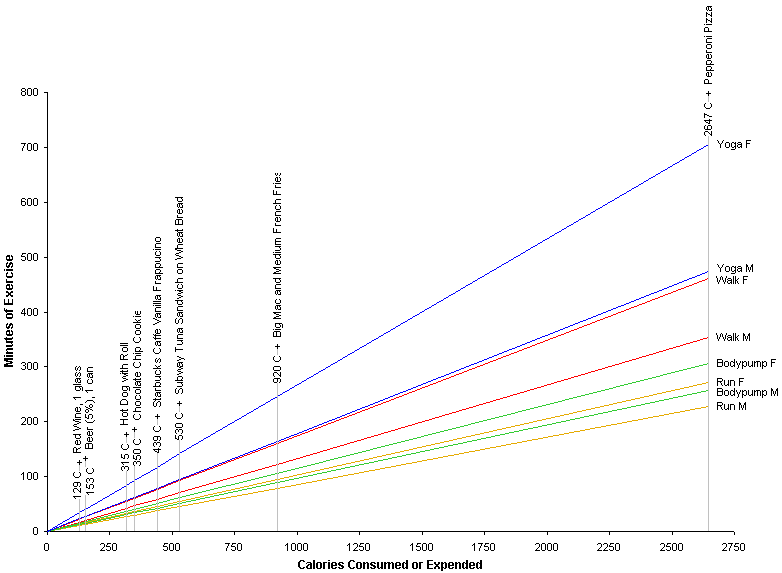 This one has its axes swapped, and I think I prefer this orientation. 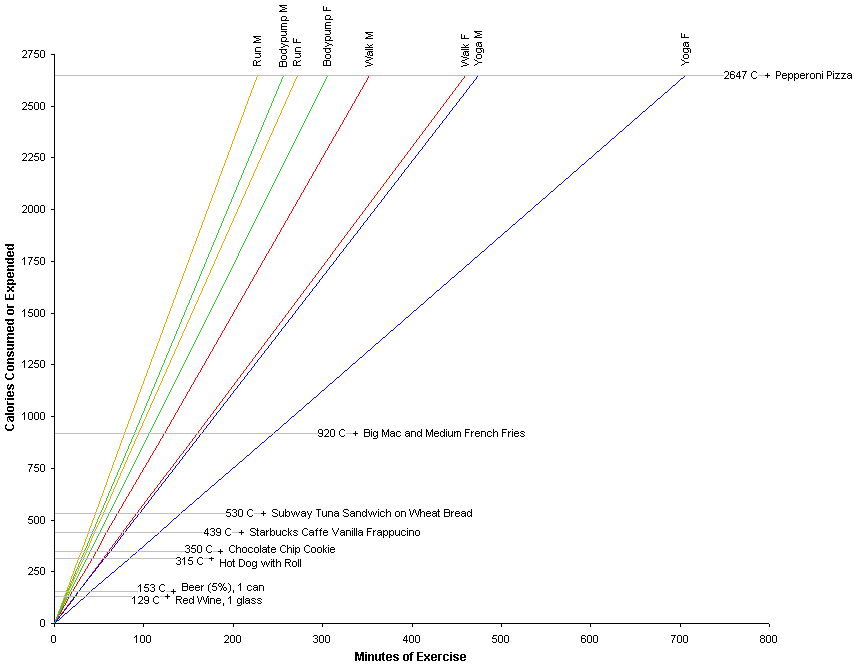 This simple charting technique has the benefit that different factors can easily be shown. The lines of expended energy vs. time can be adjusted for individuals with different weights (for running and walking, energy spent is almost proportional to weight). Or a different exercise can be placed on the chart: biking would be somewhere between runniing and walking. Or the time to burn off a bacon double cheeseburger and onion rings from Burger King could be placed on the chart at 1220 calories.

If you want you could add some color to the chart, and use bolder lines and text to denote the larger male’s exercise values. I’m not wild about the vertically oriented labels, but I find the food labels more important to show horizontally. 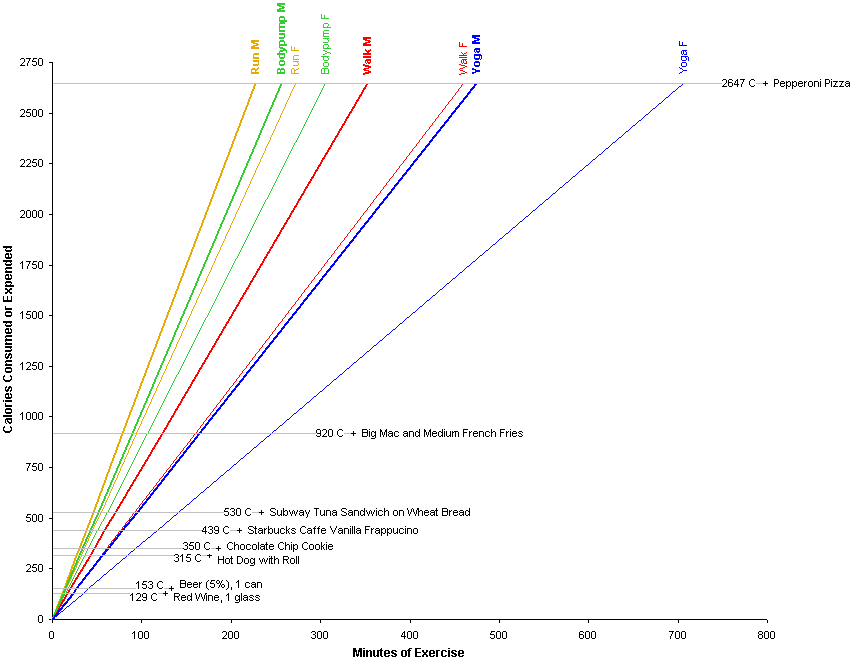 Well, that’s a pretty large chart. If we assume someone will eat half a pizza, we can reduce the scales on the axes, and make the entire chart a bit smaller. 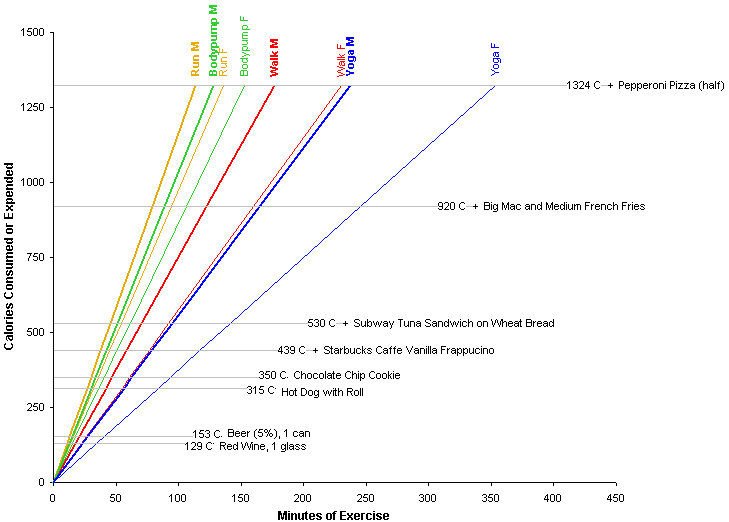 As Jeff points out in his comment, this kind of chart is fine for anyone who is scientifically trained and works with numbers. For those who are not so numerically literate, it might be simpler to show tow separate charts, one with the calorie content of a few representative foods, the other with caloric expenditures for a few popular exercises. 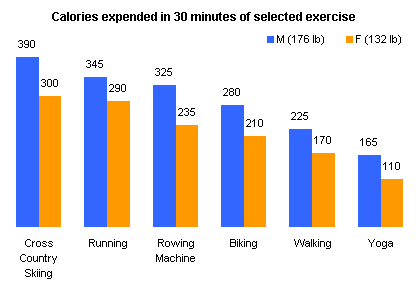 Additional exercise calorie expenditures were based on data in Exercise Calorie Expenditures – Sorted by Intensity.

Maybe we could combine the two charts above, so they use the same scale, and a simpleton user could at least judge that a chocolate chip cookie is at least half an hour of running.

How would you approach this data?