One effective way to present charts is to array them on a worksheet. You can lay them out manually, and even line them up nicely: by holding ALT while dragging and resizing charts, you constrain them to stick to the grid of cell boundaries.

However, if you have a lot of charts, this is tedious. I’ve arranged the charts in the view below using a VBA procedure. 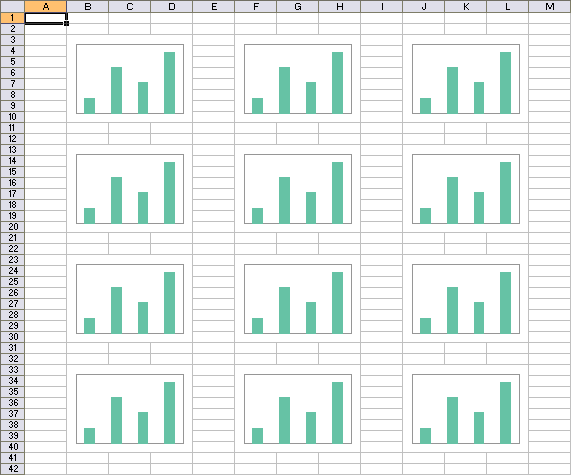 The VBA procedure is not very complicated, and it lets you specify the height and width of each chart in cell units, as well as the top left cell under the first chart, and the number of rows and columns between adjacent charts.

When working in the Visual Basic for Applications Integrated Development Environment (VBIDE, or “VB Editor” for short), you can choose a number of settings to make your programming experience better. I’ll show the settings I use along with my rationale for choosing them.

First, go to the IDE’s Tools menu, and choose Options, to bring up this dialog. 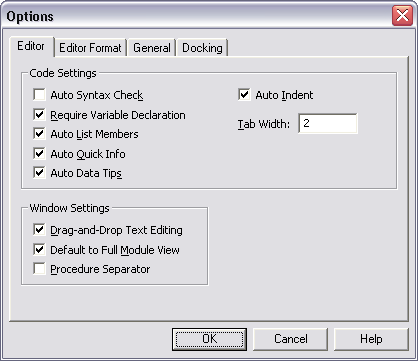 Two of these settings are must do‘s: Require Variable Declaration should be checked and Auto Syntax Check should be unchecked.

Require Variable Declaration automatically inserts the line “Option Explicit” at the top of each new module created in your projects. This line ensures that all variables are declared prior to being used in a procedure. This forces you to declare variables, and therefore to give some thought to how they are declared and used, and it prevents the use of undeclared variables.

One practical benefit of this behavior is that it prevents use of misspelled variable names. In the function below, the variable bTest is assigned a value of true, and presumably the returned value of MyFunction is supposed to be the value of bTest. However, in the command that assigns the value of MyFunction, the variable is misspelled as bTset. Since this variable has not been declared or used yet, MyFunction picks up the default value of a Boolean variable, which is False. You might spend hours checking the algorithm of your functions without realizing you have a misspelled variable name. It can be even harder to find if the variables are named bTest1 and bTestl (numeral one and lower case ell). 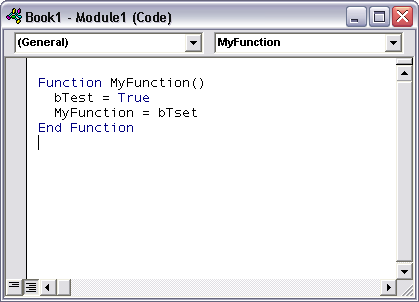 Since the Option Explicit declaration requires variables to be declared before being used, it will not allow the variable bTset to be used. When the function is compiled or run, the undeclared variable will be highlighted and a message will explain why: “Variable not defined”. 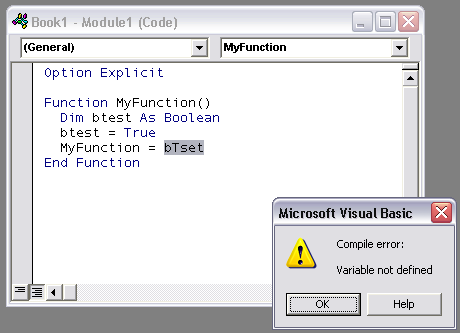 Auto Syntax Check pops up an error message any time there is a compile error in a newly entered line in a code module. In the example below, the line “If bTest” was typed, and the Enter key was pressed. Since this constitutes a compile error (If without Then), the erroneous line was highlighted red, and a message box is displayed. 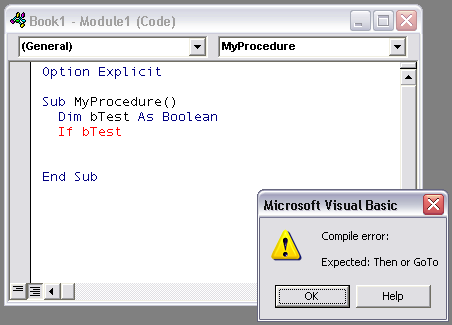 This message box becomes tedious very quickly. The text is highlighted red, and remains red until the syntax is corrected, so you can tell there’s an error. The message box is redundant. Unchecking Auto Syntax Check removes this annoying message box, but the red highlighting of erroneous code is retained.

The rest of the settings I describe are my own preferences, but here they are for what it’s worth. The dialog at the top of this post shows a couple settings I use. First, I use a custom tab of 2 spaces instead of 4. This keeps highly indented code from extending too far to the right, so I can read it in a module without horizontal scrolling, and so I can print it out without line wrapping.

Second, I suppress the display of a procedure separator. Probably few people uncheck this setting, but the routine I use to print out code extracts the text to Microsoft Word, where it is formatted and given informative headers and footers in preparation for printing (maybe sometime I’ll publish this utility). The separator doesn’t make the export into Word, so I’ve gotten into the habit of using simple text lines as separators, which are included in the Word document. I use an apostrophe with a line of equal signs as a major separator, and an apostrophe with a line of dashes as a minor separator. The minor separator might separate related procedures, while the major separator denotes unrelated procedures. 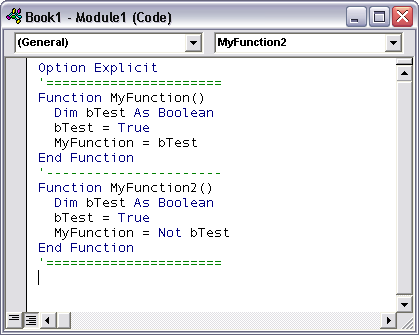 The other options I typically set relate to docking of VBAIDE windows. 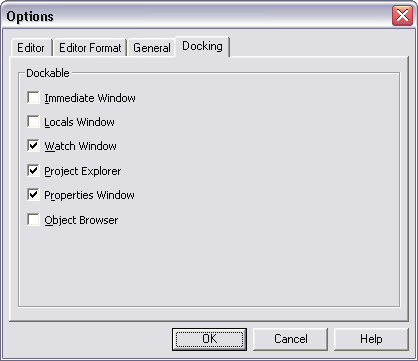 I uncheck docking for the Immediate Window and the Locals Window. If I used the Watch Window much I’d probably uncheck it as well. For me, the whole VB window isn’t large enough to have lots of windows docking along its edges and infringing on my module space. I’d rather switch between windows to access these particular windows. I also never maximize a module window within the IDE, because I like knowing what ther windows are open. This is different from my normal behavior in an application, which is to keep windows maximized unless I’m specifically comparing the contents of different documents.

I’m sure everyone has their own preferences and ways of interacting with their programming environment. Aside from the first two settings, everything else here is my own opinion and my own good or bad habits.

In the last couple of posts, I’ve discussed assigning macros to Forms toolbar controls and shapes, and to ActiveX controls from the Control Toolbox. Macros can also be run from a toolbar or menu.

This technique is valid for Excel 97 through 2003. The new user interface in Excel 2007 has no toolbars or menus, but a new ribbon. Adding a custom button to run a macro from this new interface will be covered in a future post.

If you want your macro to be available to more than one sheet, you could keep adding buttons to each worksheet. But this requires the button to have been installed. If you put the button on a toolbar or menu, you could install it once and use it whenever you wanted. It’s time to customizze the user interface. There are several ways to get started. 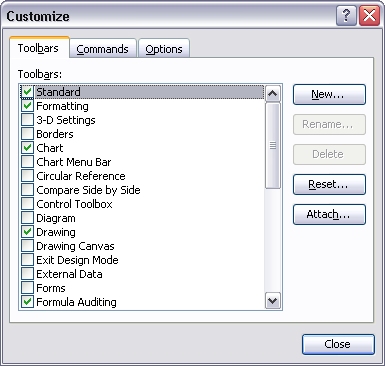 Check the box in front of a toolbar’s name to make it visible, so you can add a button, or click New to create a new custom toolbar. Type a name for the new toolbar.

The toolbar appears with no buttons, and it’s not wide enough to display its whole name.

Now click on the Commands tab of the Customize dialog. Through this dialog you could add any built-in button, even many that don’t even appear in the default interface, to any menu or toolbar. That’s nice to know, but we’ll use the same technique to add a custom button for our macro. Scroll down to the Macros category in the left listbox. 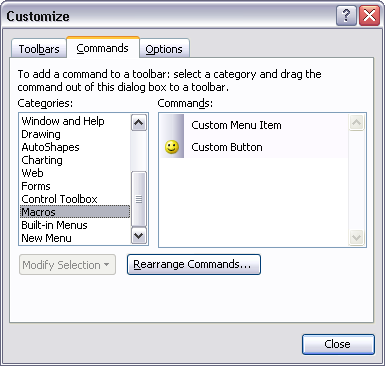 Right click on the button to change its name (to Hello World), adjust the display style (to image and text), and to assign a macro to the button. 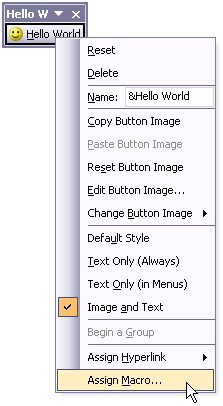 While the Customize dialog is open, you can click on a menu to open it, then drag a button onto the menu. 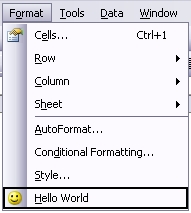 In the latest post, I showed how to assign a macro to a Forms menu control or other shape on a sheet. Macros can also be run from the ActiveX controls on the Control Toolbox.

Forms toolbar controls have been part of Excel since (I think) Excel 4. They are stable and easy to use. And they are old-fashioned. The Control Toolbox has newer ActiveX controls, introduced with Excel 97. These are fancier controls, with more formatting options, and somewhat more dynamic behavior. They often are blamed for erratic behavior, and only work in Windows versions of Excel. Seasoned Excel developers generally prefer the Forms controls and avoid the ActiveX controls. However, these controls can provide some slick effects.

Click the Command Button button, and drag a rectangle in the worksheet where you want the button. No Assign Macro dialog pops up, however, and when you right click on the button, the context menu has no Assign Macro element either. 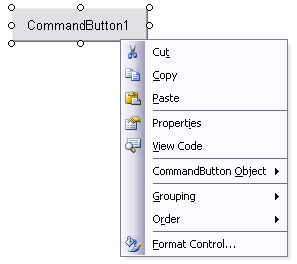 ActiveX controls work a bit differently. When they are clicked, or interacted with in other ways (e.g., when scrollbars are scrolled, when items in a combobox are selected, etc.), they raise events, which VBA can respond to. Instead of the missing Assign Macro item, click on View Code in the context menu. This inserts an event procedure in the code module behind the worksheet containing the button. 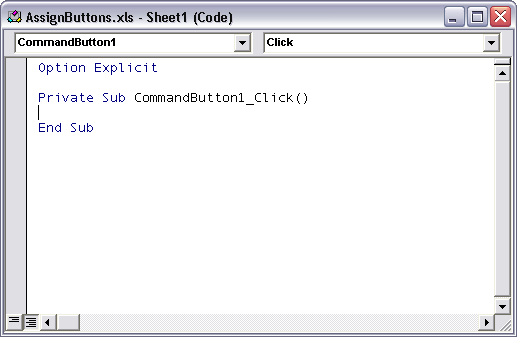 You can write code within this event procedure that runs whenever CommandButton1 is clicked. Note the two dropdowns at the top of the code module. The left dropdown shows CommandButton1, and if there were other ActiveX controls on the worksheet, they would also be listed when this dropdown is pulled down. The right dropdown lists the events which the selected control in the left dropdown responds to. 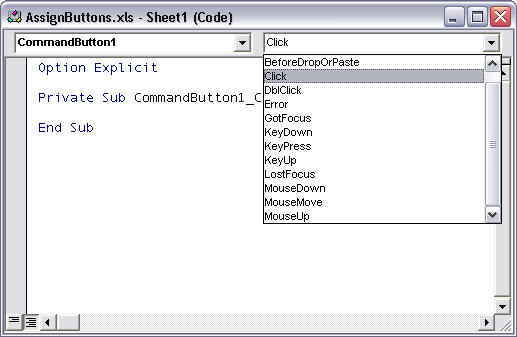 It is the wealth of these events which make ActiveX controls more powerful, and also perhaps a little flaky. But no rants now, this is a family blog. 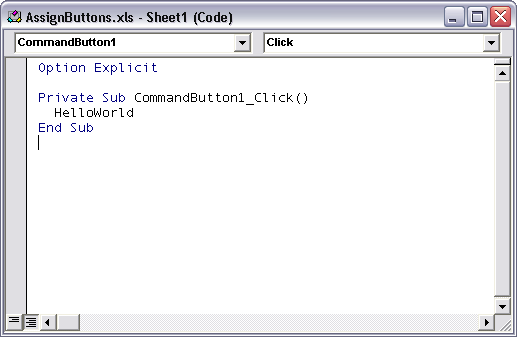 In recent posts, I’ve discussed recording macros, fixing recorded macros, and even using someone else’s macros. To run a macro, you have a few choices.

None of these techniques are particularly elegant, and you wouldn’t want to email a file with a few macros to a colleague and tell them, “Okay, go to the Tools menu, select Macro, then select Macro, then click on MyFirstMacro in the list, and click Run.” It would be nice to just tell them, “Click the First Macro button.”

You can assign a macro to a few types of objects:

In this post we’ll look at using a Forms menu button to run our macros. We’ll use this simple macro for our example.

First make the Forms toolbar visible. Like so many other things in Excel, there are several ways to accomplish this.

The Forms toolbar will appear.

Select the Button button, then draw a rectangle in the worksheet where you want to place the button (you can move and resize it later). The Assign Macro dialog pops up with a list of macros in the active worksheet for you to select from. 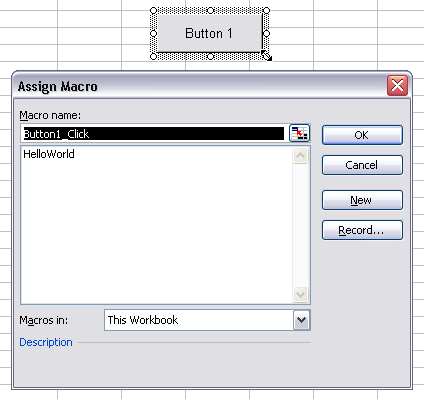 You can assign a macro to any of the Forms toolbar controls.

You can assign a macro to any shape (including any chart) on a worksheet. Right click on the shape, choose Assign Macro, and follow the steps above. 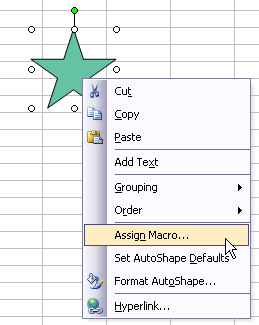