I came across an article on Microsoft’s web site, What happened to my favorite Excel 2003 Chart feature? Normally I just roll my eyes at these articles, but this one caught my attention, and I decided to address some of the items from the article. The article begins:

The improvements to charts in Office Excel 2007 were dramatic. You can now create professional-looking charts with special effects, such as realistic 3-D, transparency, and soft shadows.

I’ll leave aside (for now) discussions of professional looks and realistic 3-D. But many of the other items deserve attention.

END_OF_DOCUMENT_TOKEN_TO_BE_REPLACED

In 14 Misconceptions About Charts and Graphs Jorge Camoes writes that he prefers the look of Excel 2007 charts to those in 2003. Jorge admits that he doesn’t use Excel 2007 to actually draw his charts, but he reopens his file in Excel 2007 and uses the charts as they are rendered by the new graphics engine.

Each of the following pairs of charts shows the 2003 chart above the 2007 chart.

The markers and lines of the 2007 chart series is fuzzy compared to the 2003 chart series. This is probably due to overaggressive antialiasing. I’d rather have the series appear crisp, even if the lines are more jagged/ 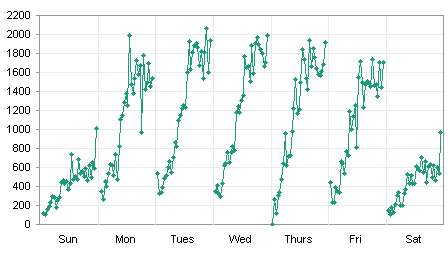 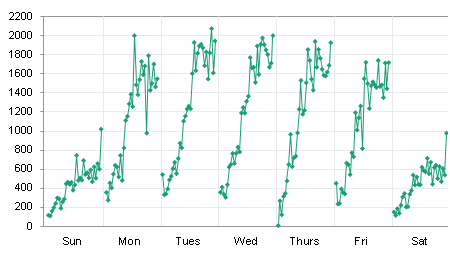 This 2007 chart has a fuzzy chart series. In addition, the right edge of the chart has been truncated. This truncation is not an artifact of exporting the chart: it was present in the live chart as well. 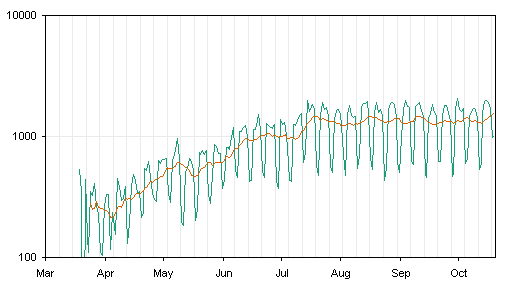 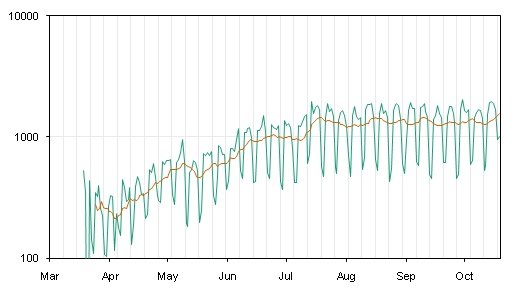 Again, the 2007 chart series are fuzzy. Why should my charts make me feel that I need new eyeglasses? 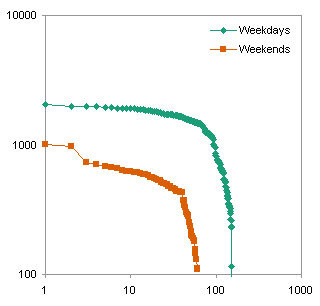 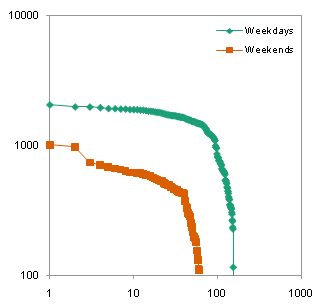 Not only are the chart series in the 2007 chart blurry, the markers are larger than in the 2003 original, and the legend font has been somehow distorted.

Sorry, Jorge, we don’t see eye to eye. I do agree that creating and formatting charts in Excel 2003 is much easier. But I don’t think 2007 charts look any better than their 2003 counterparts. The data is blurred, the markers may be increased in size, the fonts may be distorted. Some spacing around the margins of the charts may be altered, usually inconsequentially, but occasionally resulting in cropping of chart elements.

This recalculates the sheet 100 times, outputting the time (date and time as well as elapsed seconds) before and after the recalc. The average recalc time consists of the difference in these times, divided by 100. The test results are available in Recalc2003v2007.csv. I summarized the data in the following pivot table.

The chart below clearly shows that recalculation in Excel 2007 is slower than in Excel 2003, taking anywhere from 23% to 32% longer. 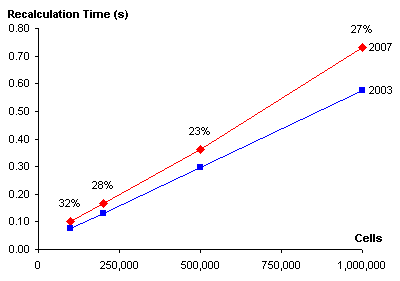 In Poor Charting Performance in Excel 2007 I compared the charting performance of Excel 2007 to that of Excel 2003. I did this by recalculating the random numbers used as chart data for XY and Line charts with 100 to 1000 points, and averaging the time it took to recalculate 100 times.

I used Virtual PC to do my testing, using two virtual machines with Windows XP SP2 running in 513 MB, one with Excel 2003 SP3, the other with Excel 2007 SP1. Robert Kosara wondered whether using only 513 MB was strangling Excel 2007. I changed the settings on the two VMs so they each used 1023 MB, and I reran the tests. 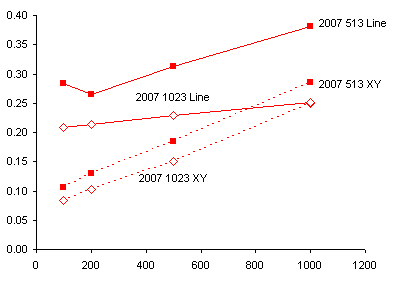 Excel 2007 is still about an order of magnitude slower than Excel 2003. 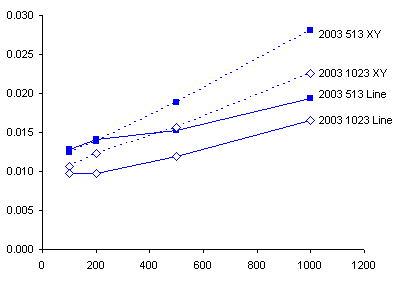 The test results can be read in ChtPerf2003v2007ram.csv. Here is the pivot table of the data.

Here is a comparison of 2003 and 2007 XY charts. Both versions of Excel experience an improvement with 1023 MB over 513 MB, but the ratios between 2007 and 2003 redrawing times are essentially unchanged. 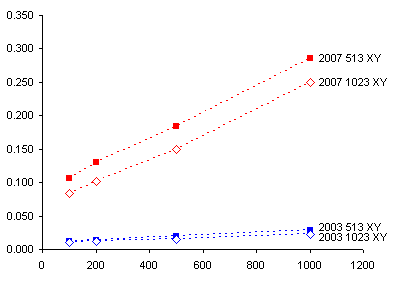 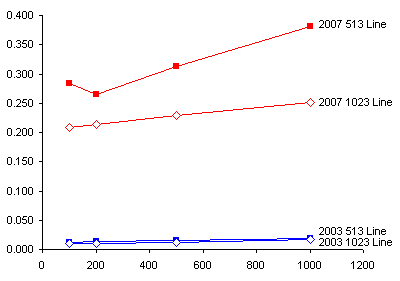 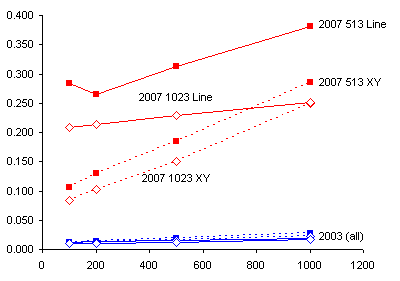 In a comment in a related post, Simon Murphy wondered how much of the chart redrawing discrepancy was due to slower recalculation in Excel 2007. I fired up the two VMs, and I ran tests measuring the time it takes to recalculate various numbers of cells. The results can be read in Excel 2007 Recalculates Slowly.

Since before Excel 2007 came out, there have been a number of complaints about how slowly its new graphics engine rendered charts. I decided to run a comparison between Excel 2007 SP1 and Excel 2003 SP3. To level the playing field, I ran each in Virtual PC within its own virtual machine, each allocated 513 MB and running Windows XP SP2.

I populated by blank worksheet with “x” and “y” in cells A1 and B1, and =RAND() in A2 and B2. I extended row 2 down N rows to populate an XY chart with N points. The XY chart had default formatting with markers only, no lines, and the X and Y axis scales were set to automatic.

I automated recalculation in the worksheet using this command from the VB Editor’s Immediate Window:

which essentially recalculates the random numbers 100 times, recording the time (now outputs the date and time, timer outputs elapsed time in seconds) before and after the recalculations. Output of a typical run looked like this:

I calculated average chart redraw times by taking the difference between the two timer values, and dividing by 100. The times in Excel 2007 to redraw the chart for 100, 200, 500, and 1000 points is shown in this chart: 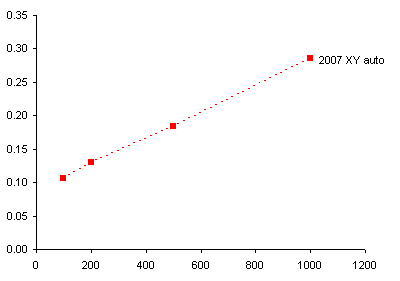 I remembered hearing that in the RTM version of Excel 2007, chart performance suffered if the axis scales were fixed, so I ran the same tests on a chart with fixed axes. It turns out that there’s very little difference. 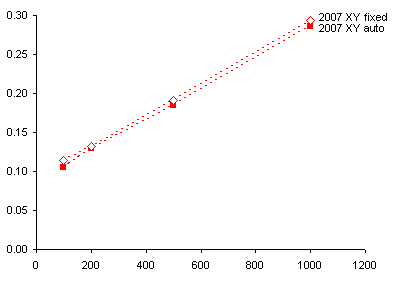 Then I thought about the markers in the XY chart. They are made from the new Office shapes, which means they have built in the ability to contain all kinds of glittery effects, like gradients, shadows, bevels, glows, and the like. Perhaps If I made a line chart instead, with lines only and no markers, I would see a difference. (The line chart used only one column of random numbers.) In fact, there is a difference, and the line charts take substantially longer to plot. 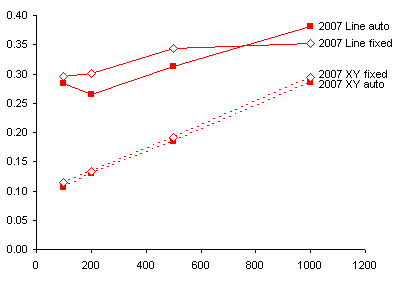 I repeated the tests in my Excel 2003 VM. The line charts in Excel 2003 actually do take a shorter time to redraw than the XY charts. More striking is the different axis scale between the chart above and below this sentence.

The Excel 2007 charts take around an order of magnitude longer to redraw than the Excel 2003 charts. 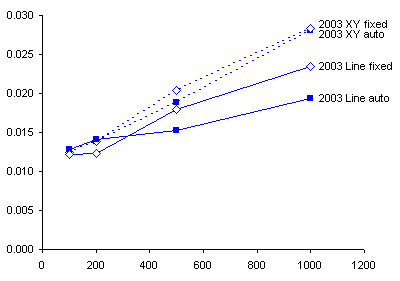 The data I used in this analysis is available in ChtPerf2003v2007.csv. A pivot table I made from this data is shown below. 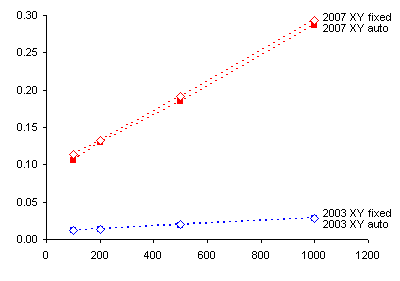 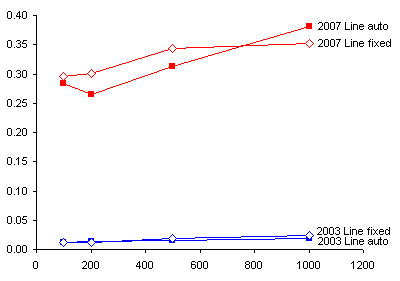 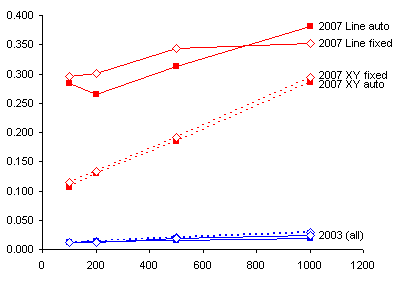 In a comment below, Robert Kosara wondered whether using only 513 MB was strangling Excel 2007. I changed the settings on the two VMs so they each used 1023 MB, and I reran the tests. The results can be read in Excel 2007 Chart Performance – Revisited.

In a comment below, Simon Murphy wondered how much of the chart redrawing discrepancy was due to slower recalculation in Excel 2007. I fired up the two VMs, and I ran tests measuring the time it takes to recalculate various numbers of cells. The results can be read in Excel 2007 Recalculates Slowly.