Let’s look at the behavior of line charts and the category axis. Here is some simple data I made up just for this exercise, and a typical line chart plotting the data.

Okay, not too boring. Let’s see what happens if we split the data into two series, red and blue. The red series will include points 1 to 5, and the blue will include points 5 to 11. This is how we might plot actual and predicted data on the same chart, or perhaps data by quarter or year in separate series. 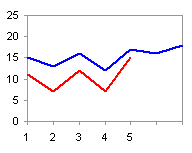 To align the two line series appropriately, we need the same number of category values, and we need to make sure the Y values are lined up with the corresponding category value. We accomplish this by splitting the values into two columns, red and blue; the red range has values in the top part and blanks below, while the blue range has blanks at the top and values below.

The line chart works fine, one series starting where the other leaves off. By default, no points are plotted where there are blanks in the table. If you are using formulas to generate this data, you need to adjust the formula to use NA(), which is not plotted in a line or XY chart, and not “”, which is plotted as a zero value.

In fact, this is the basis for conditional charts, charts which display different formatting based on certain conditions being met. There is no conditional formatting built into Excel charts, but it can be simulated using multiple series and formulas or named ranges.

To get our two-color chart, we can design a table as follows. The original data is in columns A and B. Columns C and D will have formulas to define the chart series data. Cell E2 contains a cut-off value, below which we want to see the red series, above which the blue. The formulas in cells C2 and D2 are:

These formulas are filled down through row 12. Both <= and >= are used in the formulas, because we want both series to plot the shared point; if we used <= and =, we would have a gap after the cut-off point; if we used = and >=, the gap would occur before the cut-off. If we create the chart with the data in columns A, C, and D, we will get a chart just like the one plotting the previous data arrangement. However, if we change the value in cell E2, the point that divides red from blue will move left or right. 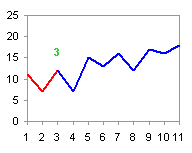 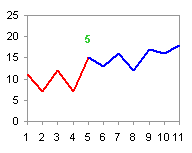 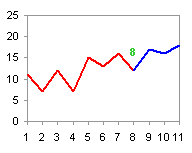 Conditional/Dynamic Chart for Cut-Off Values of 3, 5, and 8. 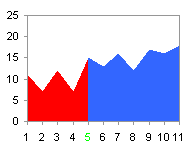