In Redrawn Electoral Maps I wrote about cartograms which selectively expand or contract regions of a map according to population, in order to give the map a more balanced weighting than geographical surface area. This has actually been a very popular blog topic in the past few weeks, especially because of the US presidential election. While these maps preserve the topology of the states that make up the US, some people do not like the sometimes severe distortion of the geographical regions. Personally I don’t mind the distortion of the states, but when a cartogram drills down to the county level, I lose the ability to relate to it.

Nathan of Flowing Data first showed me the electoral cartograms, and also led me to the following approach.

Andy Woodruff has written about an approach Axis Maps has developed which does not distort the geographical geometry of the map, in A new kind of election map and also in I hate your favorite election map in his personal blog. This visualization approach keeps the map undistorted, but uses shades of red and blue to shade counties according to their population. 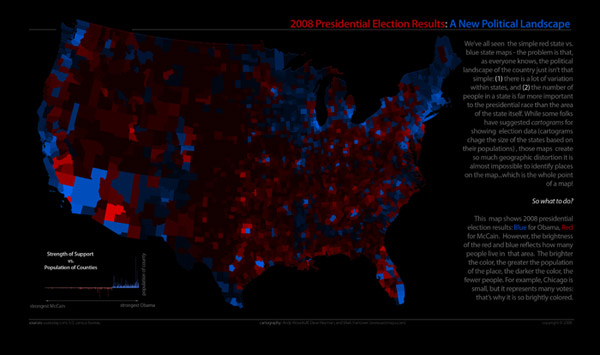 This is an interesting approach. I have had some difficulties interpreting this map (here is a larger version). First, the preponderance of black distracted me. I had the feeling of floating in space above disconnected objects.

Second, when I see different shades of color in a map, my first inclination, ingrained by staring at thousands of maps, is to interpret the different shadings as a measure of some sort of density. Population density, perhaps, or comparative strength of the vote in that region for one candidate or the other.Using color for total population of a county is integrating population density over the square miles of the county.

Another issue is comparing brightness of different regions. If two regions are abutting, and surrounded by a uniform third color, it is easy to compare their shades. If however the two regions are located at a distance and surrounded by different swatches of colors (say, Detroit and the region NE of Los Angeles in the map above), then I challenge anyone to compare their shades accurately. In Practical Rules for Using Color in Charts Stephen Few illustrates the difficulty of comparing colors of regions that are surrounded by different shades.

In general, I’m not opposed to this visualization approach. I think with a little development it may actually be practical. What we should keep in mind while comparing all manner of visualization techniques is what Andy said to me, when I described my difficulties with these charts, both area-distorted and color intensity-distorted, is that:

I could not have said it better.

As I ruminate on these charts, I have thought of a couple enhancements that may help make them more instantly comprehensible: Use a white background instead of black, and draw in the state boundaries, especially if the map shows separate shadings down to the county level. Perhaps Andy may humor me and toss out a couple samples?