Office 2007 has been out now for well over a year, and I’ve been using it in some capacity since before the beta kicked off over a year before its commercial release. Lately I’ve gotten more and more jobs for Excel 2007 as companies upgrade and users buy new computers with Excel 2007 pre-installed. I’ve decided it’s about time I gave a coherent review, rather than posting bits and pieces in various forums. This review is based on my two and a half years of experience with the new version of Excel, including beta testing and development work.

By far the biggest change in Office 2007 is the complete redesign of the user interface. After a decade or more, the familiar menubar and toolbars are gone, replaced by a large monolithic Ribbon splayed across the top of the application window. The user’s first reaction upon seeing this wonderful new interface is “Wow!” This is followed soon after by panic, as the user desperately tries to figure out where all the old controls have gone. They all are still there, and eventually most are found. Some are pretty obvious, and the Ribbon was designed to make them so, but others stubbornly stay hidden. The “Copy Picture” command in “Classic Excel” (97 through 2003) was somewhat obscure, requiring the user to hold Shift while selecting the Edit menu. This was kept obscure; it took me, a seasoned Excel user, a month to find it, cleverly buried under the Paste dropdown button. 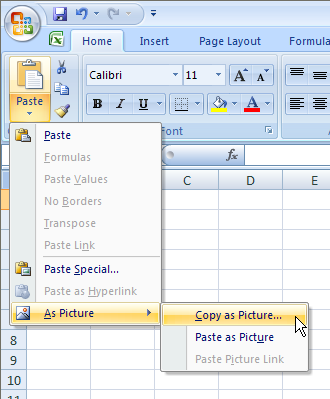 The Ribbon isn’t all that bad, as far as it goes, and a typical user probably becomes reasonably comfortable with it within a week or two. The Ribbon does take up a lot of space atop the window, more than a typical menubar plus two rows of toolbars. The screen shot below shows that my typical Excel 2003 toolbars plus the Drawing toolbar (an extra toolbar) is still smaller than the Ribbon. 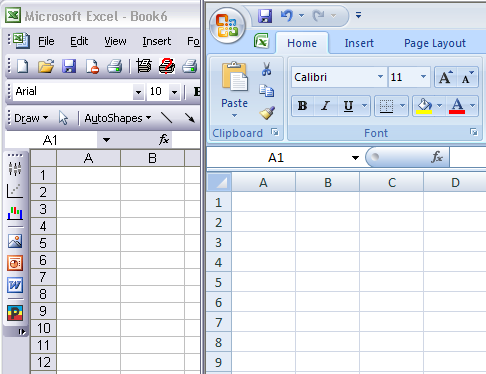 The Ribbon is rather sparsely populated with controls: some buttons are huge, like the Paste button, and spacing between others is greater than in the old toolbars. I find that the Ribbon provides me about half of the controls I would have visible in my highly customized Excel 2003 environment. Another unfamiliar behavior is that the Ribbon groups its controls in tabs of similar controls. If you are working on data in Excel, for example, you would use the controls on the Data tab. Unfortunately, it often seems like the tab you need has just disappeared from view. I do a lot of charting, of course, and with three contextual Chart Tools tabs, the odds don’t favor the visibility of the tab I’m looking for.

Well, no problem, you may say, I’ll just customize the Ribbon, just like the toolbars in Excel 2003. But you would be mistaken. There is hardly any facility to modify the Ribbon via the user interface. There is a single one-row high strip along the title bar of the application window that you can customize. The QAT, or Quick Access Toolbar, allows you to fit 30 to 40 controls along the top of the screen; in fact you can fit more, but then the QAT scrolls from side to side. You cannot undock the QAT, the best you can do is have Excel display it below the Ribbon instead of above it.

Classic Excel allows you to undock toolbars from the menu area and float them near where you are working. Classic Excel also has at least 15 tearaway palettes, each containing a number of formatting or shape insertion controls, which you can also bring next to your work area. As helpful as these have been, they are no longer available in New Excel. Excel 2007 requires you to drive the mouse greater distances, and make extra mouse clicks, to do the same tasks as before. 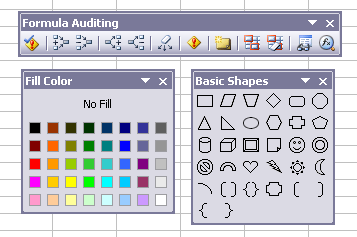 The formatting dialogs behave differently in Excel 2007. For fifteen years users have double clicked on objects to access the Format Object dialog. Excel 2007 breaks this behavior. Double clicking an object activates the Ribbon tab that Excel thinks you might want to use, but the dialog does not appear. You must right click on the object and choose the Format Object item from the pop up menu, or select the object and press Ctrl+1 (the numeral one).

Many of the dialogs relating to shapes and charts are now modeless, so that the user can interact with objects in the Excel workspace while the dialog is showing. This has several consequences. First, the formatting is applied to the object as it is selected in the dialog. Second, other objects can be selected and formatted without dismissing the dialog. There are downsides as well. In Classic Excel, an entire visit to a dialog was saved as a single entry in the Undo/Redo/Repeat queue, whereas Excel 2007 saves each individual action. In Classic Excel, you could select a chart’s axis, for example, and change the scale, the tick and label patterns, the line color, the font features, and so forth. Then you could select another axis, press the F4 shortcut key to repeat the last action, and every format applied to the first axis would be applied to the second. This is a great productivity feature of Classic Excel. In Excel 2007, since each action is recorded separately to the queue, the Repeat Last Action command repeats only the absolute last action, not the entire history of the visit to the dialog. Thus the F4 shortcut is essentially broken in Excel 2007.

The ribbon is actually straightforward to customize programmatically. It makes use of RibbonX, a flavor of XML designed specifically for the Ribbon. There are a number of third party utilities that provide mechanisms for modification of the Ribbon through the user interface: one of these is Patrick Schmid’s RibbonCustomizer. There are a number of good references that will help you program the Ribbon. One of the best web pages is Change the ribbon in Excel 2007 by Ron de Bruin. In addition, I’ve found the following book to be very comprehensive and very helpful.

In summary, Excel 2007 has introduced a new user interface paradigm, designed for improved discoverability of features for new users. Seasoned users will soon notice a distinct loss of productivity, beyond the temporary problem of not knowing where to find familiar commands. The new Ribbon interface takes up more space than even a highly enhanced Classic Excel menu and toolbar environment, but offers fewer controls in this space. The controls are housed in a system of tabs so that only a subset of controls are visible at a given time, and the “right” tab is often not visible. The user has very little ability to modify the Ribbon through the interface, and even productivity-boosting practices like selectively undocking toolbars and tearing off formatting palettes have been removed from Excel 2007. Finally the new modeless formatting dialogs seem at first to be helpful, but they come with the loss of Classic Excel’s Repeat Last Action functionality.

I use Excel 2007 a fair amount these days, and I don’t really mind it too much. Most of my work is directed by clients, and involves upgrading of Classic Excel programs and interfaces to work nicely within Excel 2007. Because of the productivity penalty I’ve described, I continue to use Excel 2003 for my own direct use personally and in my business. When clients ask about upgrading, I tell them what I’ve written about here, and I support them whatever they decide.