I’ve been obsessed with maps since I was a kid. One of my favorite magazines is National Geographic, and my favorite issues are the ones with a large folded map. I can waste spend hours on a well-designed map. The National Geographic maps generally have a modern physical map on one side, showing geological and political details, and the reverse is often an historical perspective, showing how different cultures have interacted in the region. (I’m also interested in archaeology, both anthropological and paleontological.)

Google got into maps long after we’d been using MapQuest, taking the search analogy beyond web pages to physical locations. Google started showing aerial and satellite photographs of the mapped regions some time after Microsoft introduced us to them with its TerraServer. I don’t know whether Google is using the same data or if they’ve launched their own satellites. Google’s trip calculators became very powerful when they introduced the ability to drag points on the route to other roads, recalculating based on the new selections. And now Google Earth allows us to view information in amazing 3D virtual globe representations.

In this article I will review some work done on these visualizations, and discuss criticisms of this work.

Google offers at least a couple different visualizations based on embellishments to globes. Notable are the 3D Prism Map and the 3D Proportional Symbols. 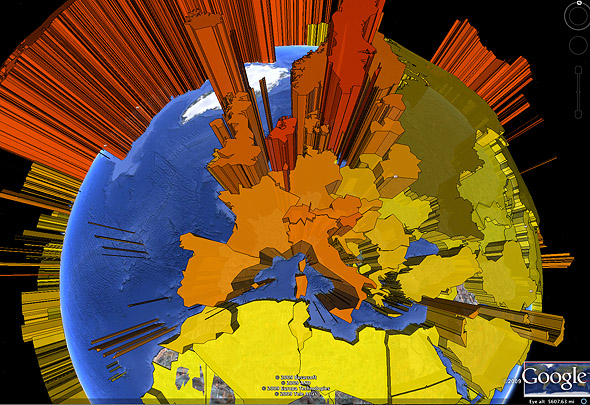 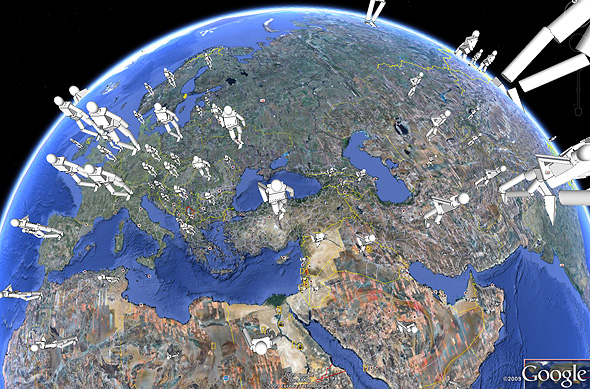 Very pretty, aren’t they? But are they effective ways to display information?

I will concentrate my discussion on the prism maps. I’ve already blogged about the use of proportional symbols in Bad Bar Chart Practices, or Send in the Clowns. That discussion applies here, with the additional problem that the 3D versions have with varying orientation of the symbols.

All About 3D Prism Maps

This isn’t really all about these visualizations, it’s mainly about one person’s obsession with them. Bjørn Sandvik loves 3D prism maps. He writes code and blog articles relating to them.

Bjørn shows us a chloropleth, that is, a color-coded map or globe, in this case a globe showing infant mortality statistics for Africa and surrounding regions. It shows Africa pretty well, without too much distortion as the viewpoint moves from countries directly below the observer to those which are further away along the earth’s curvature. 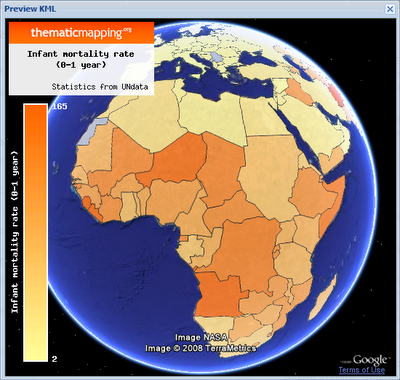 Chloropleth: Infant Mortality in African Countries, from 2b.

If you really want to compare the numbers, you can’t go wrong with a simple bar chart. 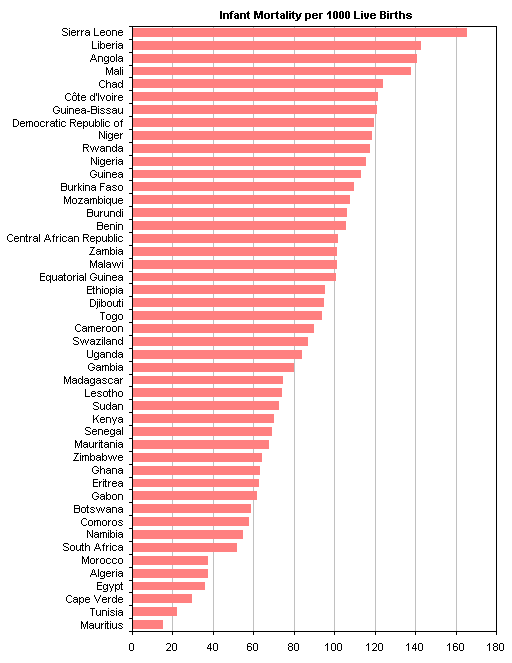 Seeing the map helps to identify particular regions with high or low mortality rates. The best solution would be side by side map and bar chart.

Well, the map isn’t very sexy, and the bar chart is a definite turn-off, although Dr. Mark Harrower of Axis Maps [1] says that “nothing is fundamentally wrong with our proven and highly efficient planimetric thematic maps.”

To add a little excitement, Bjørn extrudes hot magma outward from the earth’s core, through a hole in the earth’s crust shaped like each country, to an altitude representing the number of infant deaths per 1000 live births in that country. 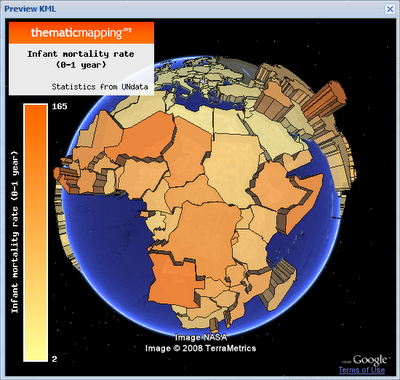 Prism: Infant Mortality in African Countries, from 2a.

Now that’s cool, I think, but it’s no longer easy to recognize the geographic boundaries, let alone determine what the relative heights of the odd-shaped prisms are.

Proportional Symbols, Warts and All

I wasn’t going to talk about proportional symbols, but Here is one that I had to share. 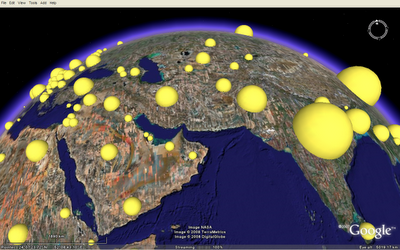 Warts, Pimples, and Goosebumps, from 2d.

Bjørn assures us that the dome shape allows people to judge their volumes. The problems are that (1) people are not particularly good at estimating volumes, and (2) the apparent diameters for a given volume change as the domes move further away along the curve of the globe’s surface.

A group called UUorld Inc. implores us to “Explain the world with maps”. Their maps are extruded prisms also, as shown in these maps of unemployment rate by state. I think simple bar or line charts would be as effective. 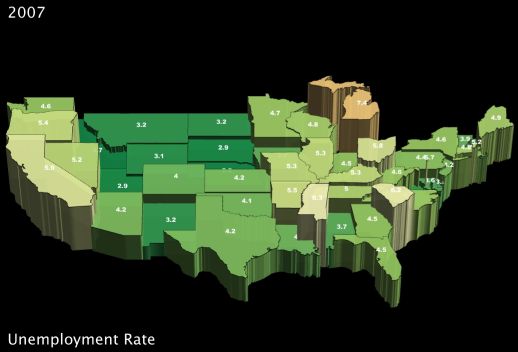 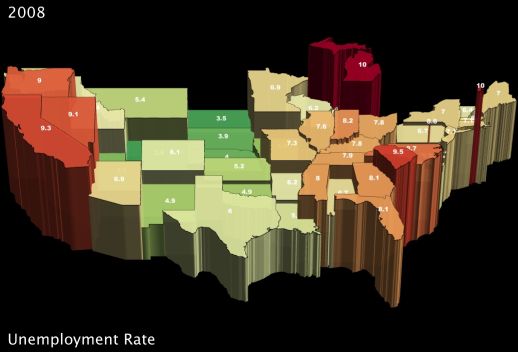 In another pair of charts, UUorld shows eligibility by state for certain federal tax cuts. The 3D chart does not show the data any better than the 2D, and the 2D chart doesn’t forget that Montana is a state too. 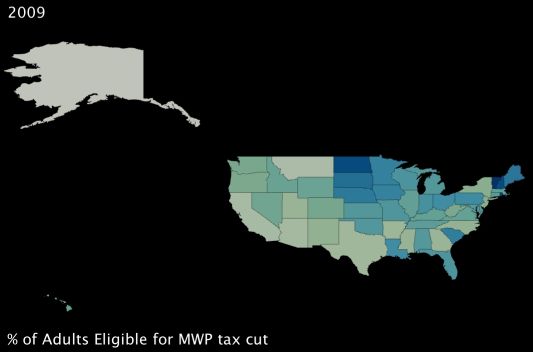 Eligibility for Tax Cuts, from 3b. 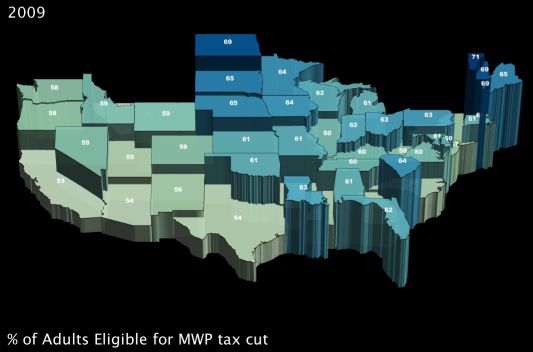 Eligibility for Tax Cuts, from 3b.

Many of the problems described below apply to the UUorld graphics, especially the occlusion of shorter blocks by taller ones. UUorld likes to animate their models while rotating them, which replaces the problem of occlusion with one of vertigo.

The Problem With Prisms

This representation has a number of problems, some of which Bjørn himself admits. According to Dr. Mark Harrower of Axis Maps [1], the approach has these limitations:

Dr. Harrower says that the prism charts are a prime example of chart junk:

Chart junk takes what should have been a simple-to-read graphic and makes extracting information (1) slower, (2) more difficult, and (3) more prone to reading errors, because of excessive ornamentation and unnecessary design additions—like adding a 3D effect that communicates nothing in and of itself but simply “looks cool.”

Dr. Harrower calls these charts a “technology in search of a problem”. The 3D graphical technology is very advanced and look very cool. But being cool is a poor justification for using graphical techniques which do not improve the ability to understand a chart’s data. And “nothing is fundamentally wrong with” the existing techniques, so there is no problem to be solved.

Bjørn reminds us that the 3D prisms make country comparison easier when spinning the globe.

For me, the need to spin the globe to see all of the data is a severe drawback. I want it all, and I want it now. I don’t want to have to turn over my map to see more information, and lose sight of information on the first page. It should all be visible at one time.

Bjørn gives us a flat representation instead of the globe, but he is fiercely reluctant to give up his extruded prisms.

Flattened 3D Prisms, from 2a.

This view remedies one deficiency with the 3D prisms, while retaining all others. For example, I don’t think I can see Egypt on this map.

Bjørn shares a few more prisms, which further illustrate the problems with prisms. This one shows life expectancy in countries around southern Asia. 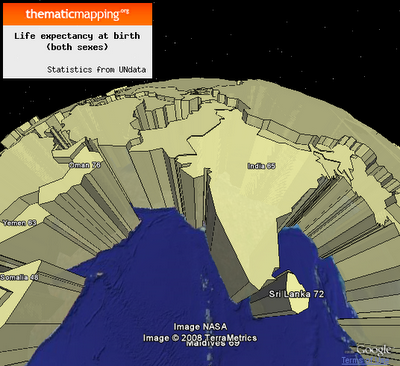 Well, there’s a problem: the prism for Afghanistan is so short that it is obscured by Pakistan. No problem, just change the view, right? Let’s center the view on Afghanistan. This has the primary effect of adding a very wide border around Afghanistan. 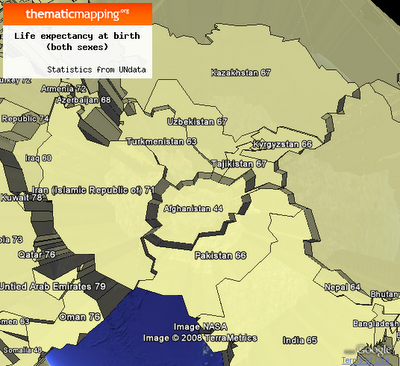 Bjørn adds an additional redundant scale, using color to help us when we can’t judge the height of the prisms. 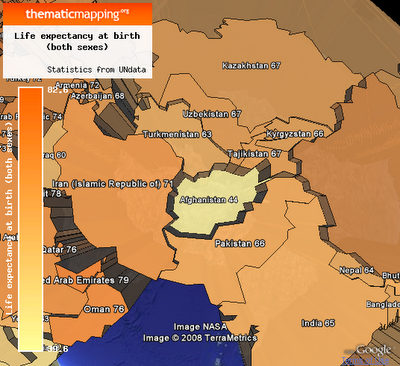 This merely raises the question, Why not dispense with the prism height metaphor and stick to color-coded countries? In fact, why not use a bar chart to show the values?

To these criticisms of 3D prism maps Bjørn replies, “In conclusion, country comparisons are problematic on a 3D globe, but it shouldn’t stop us from doing it!” [2a] And he insists that Virtual Globes are a good idea for thematic mapping.

So he’ll keep doing his cool thing, and Dr. Harrower will go on making readable maps.

2.d. Why 3D is not working #4: Am I sacrificing accuracy for eye candy?

3.a. US Unemployment in 2009 – More Job Losses in Production

3.b. The Obama Stimulus Package, State by State