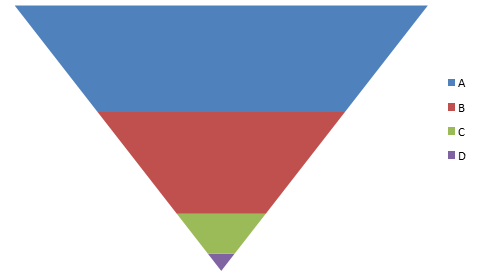 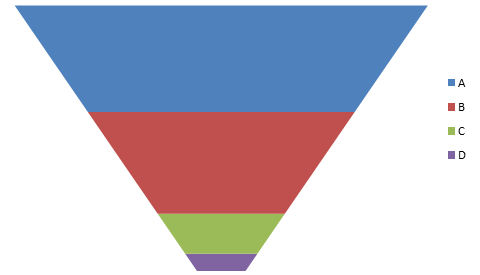 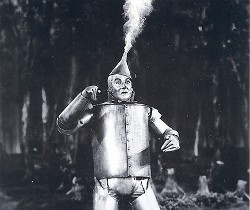 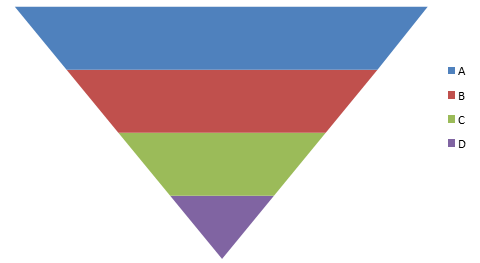 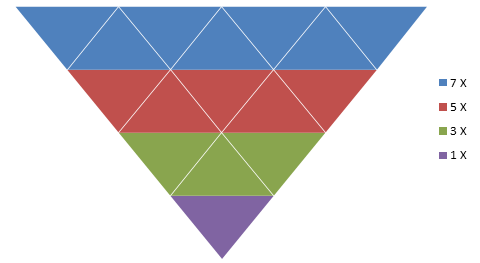 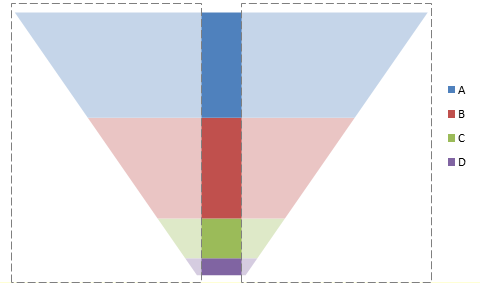 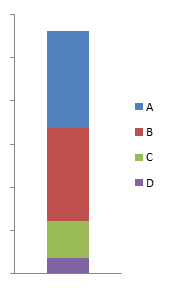 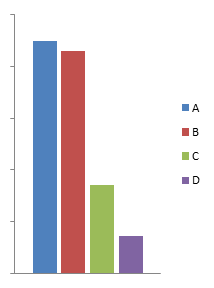 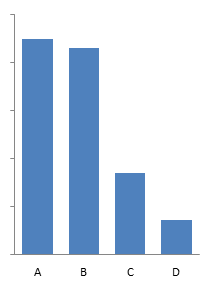 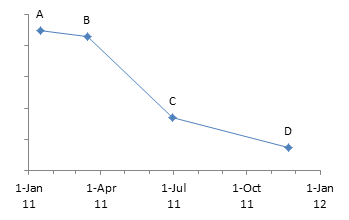 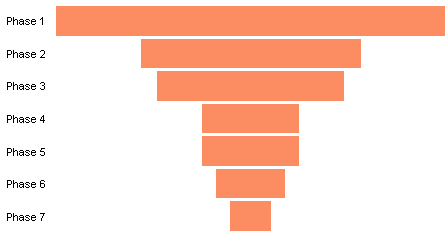 The problem with Funnel and Pyramid charts is that they usually suffer from a misapplication of the funnel metaphor, and Chandoo’s is no different. In this incorrect metaphor, a funnel is used to show an ever narrowing amount of something (sales, in Chandoo’s example) the further along the stream the process goes. The quantity decreases because some of it is removed from the stream or blocked from proceeding. In a real funnel, there is no loss of this quantity, in fact the flux of the quantity past a point must increase to account for the decreased opening size. But nothing is lost.

In fact, a better representation would be a Sankey Diagram (see below), which accounts for the losses through the process. But that’s a discussion for another day. 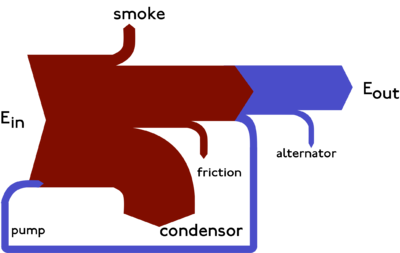 One can still use a bar chart to represent the quantities at each phase of a process. One improvement is to move the bars to one side of the chart. This gives better resolution to the values (wider difference on the chart for the same difference of the measured quantity). This also makes it easier to compare relative values. Because of the shared baseline along the left edge of the chart, it’s easier to judge that in Phase 2 and in Phase 3 the values are respectively a bit over and a bit under 50% of the value in Phase 1. In the tornado chart above, one could not be so confident in these estimations. 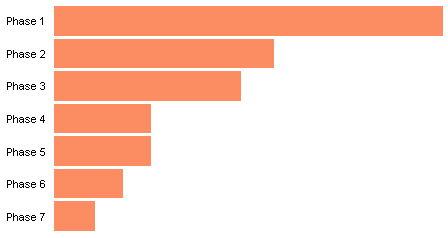 In Tornado Charts and Dot Plots I described a different type of chart, variously called a tornado chart or a funnel chart, which compares two populations by plotting bars either to the left or to the right of the middle of the chart. The symmetry is appealing, but the ability to compare two bars that strike out in opposite directions is compromised. I suggested using dot plots instead. Here is a rudimentary dot plot of Chandoo’s data: 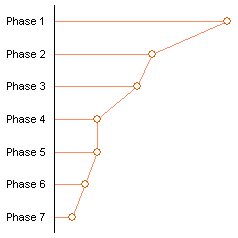 If we are satisfied with the resolution of the original funnel chart, we can still benefit from the common baseline by using left-aligned bars half as wide as those of the funnel chart. This also saves a lot of space in a crowded report. 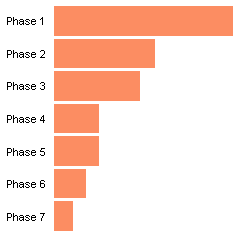 One could also make a column chart of the data, but the category labels either must be rotated or shortened, reducing legibility in both cases. 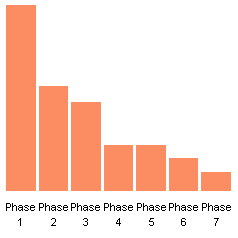 At the outset I said that Chandoo’s protocol was “okay”, but he could have used a different bar chart approach to make it better. Basically, a funnel chart is made of two series, one showing the values (orange below) and the other normally hidden (green) which helps to position the value bars. 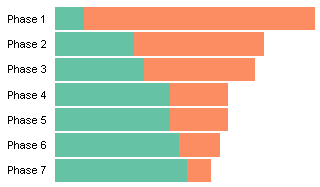 When I make charts like this, I make floating bar charts, which are stacked bar charts, with a dummy series that pushes the value series into position. Below I’ve offset my green and orange bars to illustrate the construction. I can hide my dummy series by formatting with no borders and no fill. 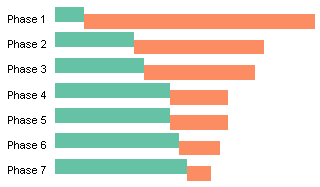 Chandoo chose instead to use clustered bars, as shown below, with the orange bars including the data plus the (green) offset into a total value. The green bars are then moved in front of the orange bars and hidden by formatting them with a fill color that matches the plot area background. 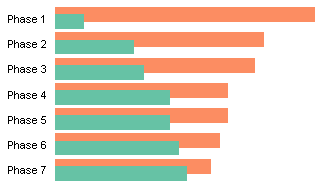 As soon as somebody tries to read values off the chart by mousing over the bars, the superiority of the stacked bar approach is evident. Below I’ve moused over one of the value bars, and we see it’s from the Funnel series and the value is 21,180. 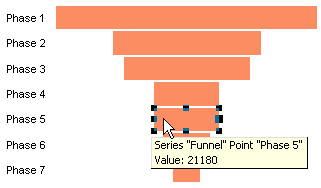 If I try to mouse over one of my dummy bars, the cursor can’t see it, because it has no fill, and instead all that is detected is the plot area. 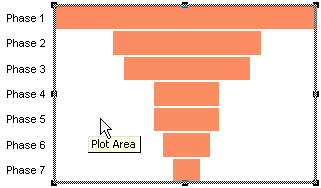 In the clustered bar approach, the exaggerated value of the Total series is displayed (53,593), and if this point is selected, the covered end of the bar is outlined. 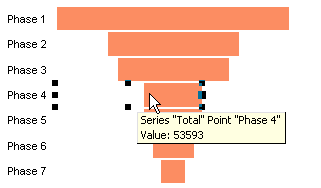 The hidden points can also be detected, as in the Dummy point below with a value of 32,408. 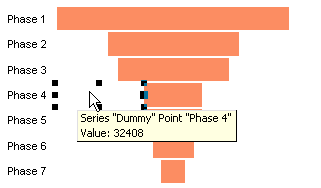 Sometimes it helps to use fancy formatting or designs to make a chart more noticeable. But in a business report, if the data is important, it does not need fancy effects to be noticed. Selecting a funnel chart, even using the improved stacked bar approach, is still a compromise which decreases the effectiveness of the chart.

In Bad Graphics – Stacked Pyramid Chart, I critiqued a popular infographic display type, the pyramid chart. In this post I will repeat the favor for funnel charts. These are not the funnel charts which are also called tornado charts, and in some circles are used to construct population pyramids (see Tornado Charts and Tornado Charts and Dot Plots elsewhere on PeltierTech.com). These are stacked 3D abominations which sometimes follow a flawed analogy to a physical funnel, just like the pyramid charts in my previous example follow a flawed analogy to an actual pyramid.

The first example of a funnel chart comes from the FusionCharts Free Chart Gallery. 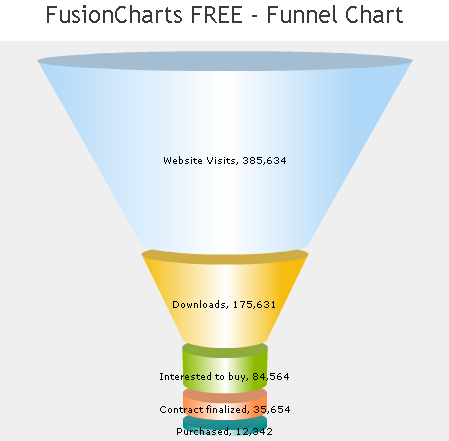 This example shows the flawed analogy I’ve alluded to, which indicates that some quantity goes from a large number to a small number, starting with website visits, only a fraction of which result in downloads, and only a fraction of those result in inquiries about purchase, etc. It seems to me that a physical funnel should make everything that goes in the top come out the narrower bottom. If it didn’t work that way, your kitchen would become a disaster. END_OF_DOCUMENT_TOKEN_TO_BE_REPLACED