There has been a lot of discussion about pie charts and bar charts lately. I and many other know-it-alls have clearly stated that pie charts are the red-headed stepchildren in the family of chart types. In Peltier Loves Pie I provided some guidelines to follow if you still insist on using pie charts.

In this post I am giving bar charts equal time.

Bar charts are widely used, and in most cases they present an improvement over pie charts. According to William Cleveland, the effectiveness of different human visualization skills are ranked as follows:

A bar chart relies on the lengths of its bars to convey information. Length is found higher than a pie chart’s angles or areas in Cleveland’s hierarchy of human perception, so bar charts are better than pie charts for presenting data. A bar chart also uses the same color for each point, so there should not be any unintended weighting of values by color. END_OF_DOCUMENT_TOKEN_TO_BE_REPLACED

I commented on Seth’s three laws in Seth’s Three Laws of Great Graphs, where I agreed in principle with rules 1 and 3. I felt he was overly dismissive of bar charts and overly permissive of pie charts, and suggested an alternate rule 2: Choose Chart Types Intelligently. I countered Seth’s criticism of bar charts in Bar graphs vs. Pie charts, by showing examples of bar charts which were improvements over the pie chart he gave as his example.

Two of my favorite bloggers have joined the debate about Seth’s charting guidelines:

Jorge says that Seth’s One Story rule should really say tell a story clearly, which also means include necessary information but leave out irrelevant information. Jorge agrees with me that Seth’s “No bar charts” rule is misguided, and should be a more thoughtful process of choosing the right chart type. Jorge feels that motion can play a part in effective information display, but that Seth’s motion is “just a silly dramatic effect for presentation purposes”. Finally, Jorge presents his own three rules:

Kaiser agrees with Seth’s One Story rule, but not with the idea that nuance is bad and leads to confusion. A better guideline than reducing nuance is reducing complexity through careful planning and design. Kaiser feels that Seth’s prohibition of bar charts is based on an unfamiliarity with which chart types best depict which types of information. Kaiser shows some bar charts which are not well designed, but agrees that bar charts are valid in many cases, and other types beside pie charts may also be effective.

In fairness to Seth Godin’s point of view, he is talking about making marketing presentations to nontechnical audiences, and you often need to make a quick point without confusion or distraction. My own background is in making presentations and writing reports for highly technical audiences of scientists and engineers, people who live with numbers. It is still important to provide a clear statement without extraneous detail, and for this crowd, extraneous detail has a different definition. But when I think about removing nuance from charts, I am reminded of Jack Nicholson’s famous “You can’t handle the truth!” tirade from A Few Good Men.

Three more favorite blogs of mine have chimed in, with commentary much as I have described above:

Several additional reviews have come to my attention:

Apparently there is quite an industry surrounding the wisdom of Seth Godin. A lot of his marketing advice seems very well founded. I’ve seen him on YouTube, of course, but I didn’t understand the magnitude of his following. If you Google for Seth, you will find dozens of blog entries by people who only link to his posts, or reiterate the takeaways from his posts and say “Good stuff” and “Seth’s done it again!” The proportion of readers who step back and say, “Seth’s pretty smart, but I don’t think that’s right” seems pretty small.

In Seth’s Three Laws of Great Graphs, I agreed in principle, but suggested changing item 2 to “Choose Chart Types Intelligently”, because bar charts are not intrinsically worse than any other chart type.

I think we’re in agreement on this point. Seth mentioned non-scientists, so I guess another underlying theme is “don’t make them think about this information”. I think we can agree that sometimes that’s also our intention. END_OF_DOCUMENT_TOKEN_TO_BE_REPLACED

Seth Godin gave his suggestions for using charts in presentations in The three laws of great graphs. He said that

There are 314 principles for good graphs and charts [in presentations]. But these three laws will take you far.

These are good laws, though I would like to modify law number 2 to read “Choose Chart Types Intelligently”. The following are my restatements of Seth’s points, with additional commentary about my version of his law number 2.

1. One Story
The reason to use a chart in a presentation is to make a point, to tell a story. Make sure each chart tells the story you want people to hear. No distractions, no side stories. Keep it simple, and keep to the point.

2. Choose Chart Types Intelligently
Seth doesn’t like bar charts. That’s cool. I like bar charts, but only where they are used appropriately. Seth points out how bad bar charts are for time series data, and it’s true, line or area (or XY!) charts are a better means for showing trends over time. Seth also shows an ugly 3D bar chart, and it’s also true that 3D effects reduce the effectiveness of your graphics.

However, bar charts are well suited for displaying categorical data. The important point is to keep it simple, and keep to the point.

3. Motion
Use motion to help tell a story. This doesn’t mean use a lot of animation, zoom the chart in from Neptune, and drop data points from the sky by parachute. It means a technique as simple as showing two charts, “before” and “after”, on successive slides or even side by side, where the charts are aligned and use the same axis scales. In fact, if the charts are adjacent, motion isn’t necessary, and it is easier for the audience to make comparisons.

In More graphical propaganda, Andrew Gelman of the Statistical Modeling, Causal Inference, and Social Science blog shows some pie charts of recent Kenyan election results which he got from John Sides’ blog post, Election Fraud in Kenya in The Monkey Cage blog. The charts are awful; as Andrew notes, the colors change and the wedges are reordered. I’ve regraphed the data on a bar chart, which I think is much better. 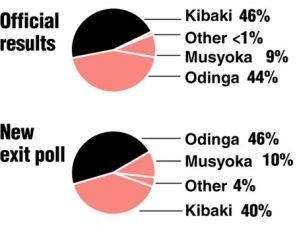 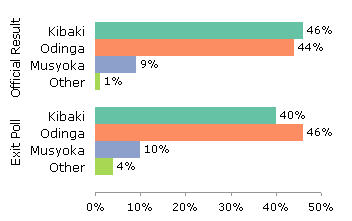