Ganesh, a reader of my web site, asked whether I could make a chart like this one: 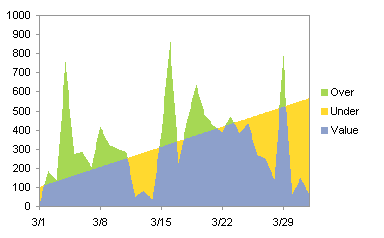 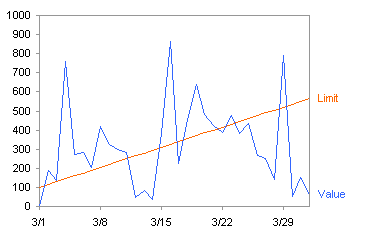 The data (Dates, Value, and Limit) are shown below with some calculated columns. These will be described as we need them.

First, let’s plot Limit and Value together, to see what we have. Here is an unstacked area chart, with Limit the first series (plotted behind Value, the second series). 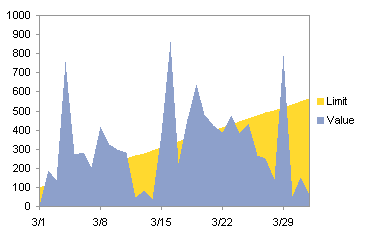 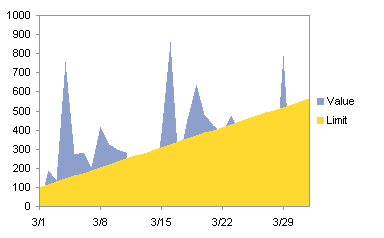 The next attempt is to compute the differential between the Limit and the Value, which is calculated in the -Diff column. Then the Value and -Diff columns are plotted in a stacked area chart. 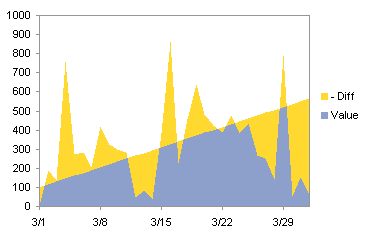 Looks like a useful chart, and we can see the entire extent of both Value and Limit, but it shows positive and negative deviations in the same color. Let’s calculate another column, Diff, which is essentially the negative of -Diff, and plot the Limit and Diff as stacked columns. 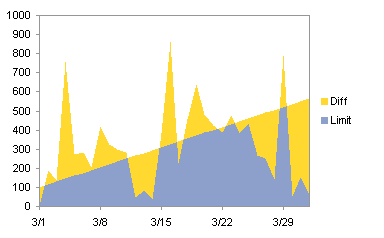 That’s the same chart except for the legend. Time to try something radical. Let’s plot the Limit and Value together again, but with Value on the secondary axis. Maybe that will show us something different. 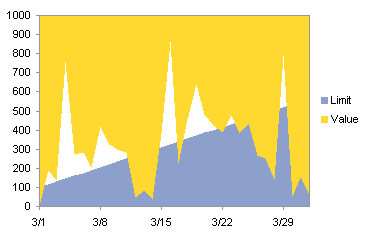 Then again, maybe not. This doesn’t differ much from our first attempt. Well, sometimes charting is an interactive trial-and-error exercise. If we step back a moment and take it logically, we can see that we need three series: 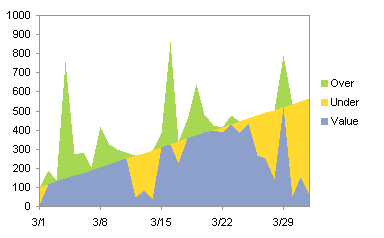 This is almost right, except the Blue and Green areas do not line up as we want. The reason is that the area chart series don’t know they’re supposed to meet between categories (dates). We’ll have to make the same chart type. but with a different strategy for our categories. We will increase the number of categories so the resolution along the junction of the three series is finer. To do this we will calculate values in a new range, with known data points every ten rows, and interpolated points in between.

A portion of the new data table is shown here. The black rows are the original data, while the blue rows are interpolated. Assume the original Date, Value, and Limit data is in columns A:C, with row 1 holding headers and the data starting in row 2. The first ata cell of the new Date column (below), say it’s cell E2, has thi formula:

This basically repeats each value in column A ten times. This formula is filled down as far as needed (row 312 if you’re keeping score at home). This interpolation formula is entered into the first cell of the Value column (cell F2) Is:

Now we have a chart to construct. Select the range with the second value column and the Under and Over columns, and create a stacked column chart: 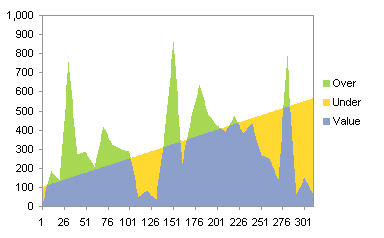 We didn’t use the date column for category values; we left it blank so Excel simply uses {1, 2, 3, …}. The series look good; you could still see the misalignment if you blow it up (see below), but breaking the X range up into ten times as many points has helped minimize the effect. 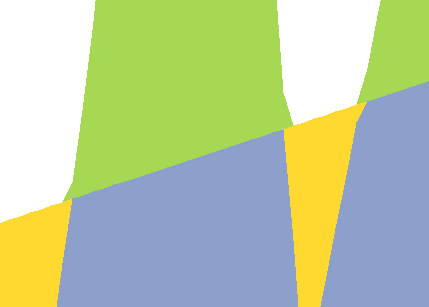 Now we need a decent date scale axis. We will add a dummy line chart series to provide this scale. Here is our data:

Copy the data, and use Paste Special > Values to add the data as a new series, series in columns, categories in first column, etc. The series doesn’t appear because its values are zero. Select one of the series, and click the up arrow button until the Axis series is selected. Go to the Chart menu, select Chart Type (or on the Chart Tools > Design tab in Excel 2007, choose Change Chart Type), and choose a line style for this series. 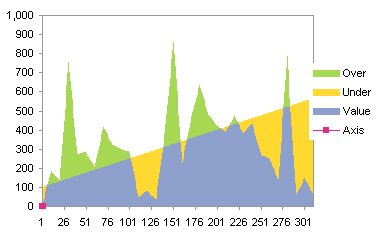 The series still barely appears down in the lower left corner of the chart. We need to have this series on the different axis group than the area chart series, and because of the way Excel does coincident axes, we need it on the primary axis. One by one, the area series need to be moved to the secondary axis. Here is the series with the Over series moved: 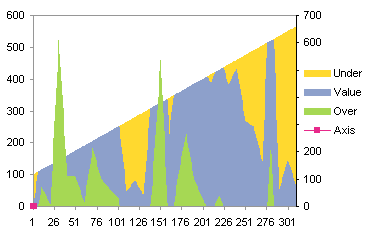 Moving the other area series changes the appearance drastically, because the line series now dictates the category axis. 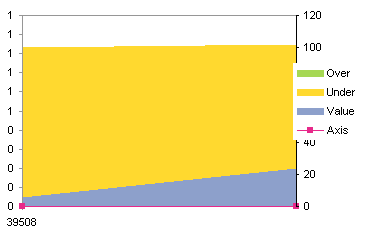 Excel helpfully provides only a secondary Y axis, so the secondary X axis must be added from Chart menu > Chart Options > Axes tab, or from the Chart Tools > Layout tab. 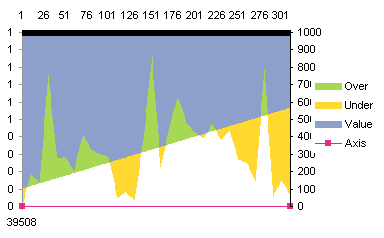 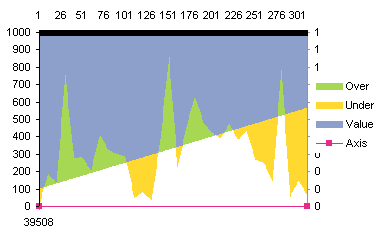 Format the primary category axis so it has an appropriate date scale. 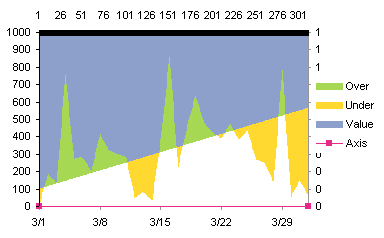 Format the line series so it shows neither the line nor its markers. Then select the axis (one click) and then the Axis legend entry (a second click), and press Delete to remove this legend entry. 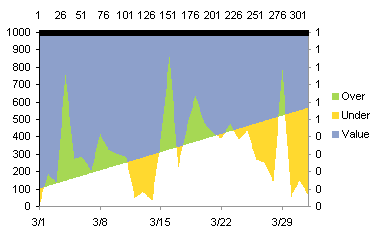 Format the primary Y axis (right side) so it has no ticks and no labels). 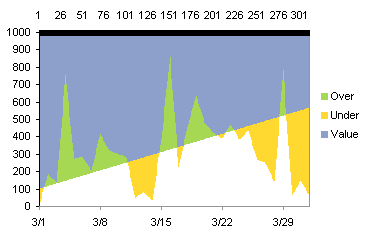 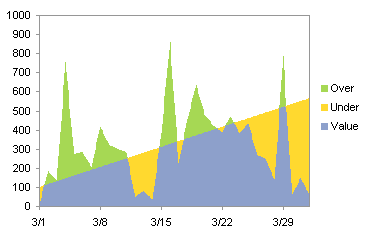 And there’s the chart.