Edouard Buning is a Dutch marketing and communications consultant who has recently started up a Dutch blog in the spirit of Chart Busters. Edouard has provided this article for my Peltier Tech Blog readers.

Recovery by Sector of S&P 500 Companies by Edouard Buning

In Bloomberg Business Week of March 8, 2010 a graph on page 17 representing a breakdown by sector of net income in 2008 and 2009 of S&P 500 companies drew my attention. At first the paired waterfall chart seemed organized, but on second thought I realized that it was in fact confusing and could tell us some more than the conclusions drawn by Business Week.

Business Week’s conclusion that financials and consumer discretionary rebounded in 2009 after the severe losses in 2008 is difficult to see in the graph although the red bars in 2008 are clearly the first thing that you see, followed by the increase in total net income from $288B in 2008 to $512B in 2009.

The data by sector and by year: 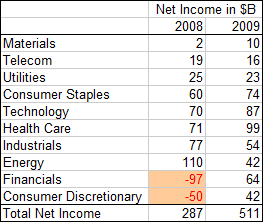 A short look at these data shows us that there are more interesting conclusions that can be drawn, but first we’ll take a look at the chart to see how we can improve it.

A vertical bar chart is already an improvement: 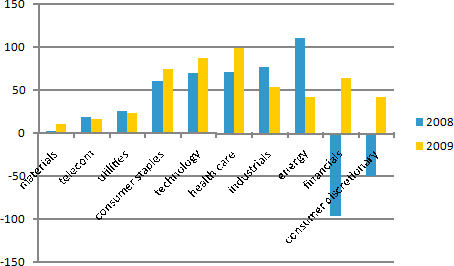 To improve the readability of the sector names, let’s flip the graph and reverse the order of the Y-axis: 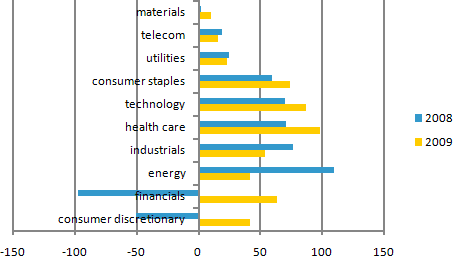 With a little more formatting, such as adding a title and major gridlines, this panel chart is the result: 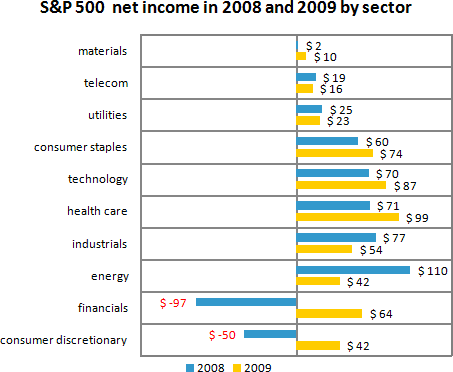 Now for the interesting conclusions:

Edouard Buning is the founder of BuningAdvies, a consulting company in the Netherlands that focuses on how to use market research results in marketing and communication actions. After a 20+ year career in market research and presenting the results of market research studies to his clients he realized that on the one hand client companies were always eager to know all ins and outs of the study, but on the other hand it often happened that the same client company did not use the recommendations nor took any actions based on the study. In many instances this was due to a lack of time, capacity, knowledge, or priority for the follow-up. BuningAdvies offers this follow-up service.

Edouard has recently started a blog on the story behind a chart, Grafiekadvies. This is the first blog in the Netherlands about charting.