In a comment to my post How to Make a Donut-Pie Combination Chart, Sjoerd Hoogwater pointed me to Scary Bailout Money Info Graphic. The post features information about the federal bailout of the banking industry, but I don’t know what’s scary, the bailout money or the info graphic. In this scary post, Wade took data from Boing Boing’s Cory Doctorow (Bailout costs more than Marshall Plan, Louisiana Purchase, moonshot, S and L bailout, Korean War, New Deal, Iraq war, Vietnam war, and NASA’s lifetime budget — *combined*!), whe got it from Barry Ritholtz, Big Bailouts, Bigger Bucks, and made this outstanding example of why pies are bad, and why two pies are worse than one: 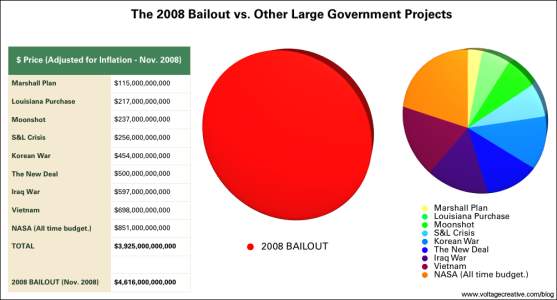 There are a few things to note about this chart.

Second, the note under the chart states, “Pie charts are to scale.” This is the warning that there is actually some kind of relationship between the two pies, or rather, the pie and the featureless disk. It turns out that the areas of each disk are proportional to the total dollars represented by each disk. Given the perspective, I would have simply assumed that the two disks have the same diameter, but the left one is floating in space closer than the right hand one. However, without my 3D glasses, it’s really hard to make out the 3D details. I guess I need a floating ruler to measure the diameters.

A third point: Why are the Marshall Plan through NASA data points plotted as if they are the total of some logical set of points? They are separated in time, each being part of one or several years’ budget, and I’m sure none of these are more than a small part of the budgets they are drawn from. They shouldn’t be represented by a pie at all.

A minor point, which is not Wade’s fault, concerns the NASA budget. The table is double-dipping, because the cost of the race to the moon is part of NASA’s total budget.

If we want to show just how large the bailout is compared to the other large expenditures, there’s nothing like a bar chart. 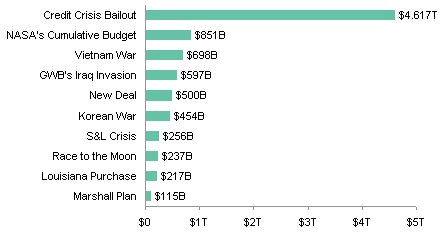 Now we can see just how large the credit crisis bailout is compared to these other large expenditures. It’s more than 5 times as great as the total NASA budget for all time. To be fair, all of these minor expenditures weree spread out over several years. The only other one-year expenditure was the Louisiana Purchase, smaller than 1/20 of the bailout. Wow. I wonder if we can trust these numbers.

So I decided it was time for a sanity check. I recall hearing numbers on the order of $700 billion, so I Googled ‘bailout as percentage of budget’. I found a quiz in the online Seattle Times, Globalist quiz: Sizing up the bailout, which asked the question:

What is the bailout package equivalent to in dollar terms?
A. U.S. defense budget
B. U.S. trade deficit
C. U.S. oil imports
D. A stack of $1 bills 52,000 miles high

The answer was a bit surprising, since three of the choices were true.

C. US Spending on oil imports is heading toward $500 billion. False.

Very interesting. The $700 billion amount has been in the news for weeks, but I don’t know where the figure of $4.6 trillion came from. Cory Doctorow’s Boing Boing profile describes him first as a science fiction writer, but he got the data from Barry Ritholtz, who appears on CNBC. I’m not pretending to understand these numbers, but the figure in the trillions includes “commitments, loans, and pledges of backing”, which I guess includes how much the taxpayers will be out if all of the loans default.

This whole economic discussion is pretty far away from Wade’s pie charts. Here is why the bar chart is better:

Unfortunately the bar chart I proposed uses nowhere near as many colors as Wade’s art project, and it only uses two dimensions.