Today I am pleased to present a guest post written by my colleague Nicholas Hebb. Nick appears online frequently, commenting on Excel-related blogs and corresponding in the various forums.

With the release of Office 2007, Microsoft rewrote the drawing tools from the ground up. On the plus side, this meant new shapes, new styles, and the addition of SmartArt. On the downside, they didn’t have time to incorporate AutoShape operations in their macro recorder prior to release. Thankfully, Excel 2010 has added macro support back, but like all macros the code generated is often bloated and relies heavily on the Selection object, which tends to hide the core objects in use. For the most part, the online help is good, but there is some information that doesn’t get explained in detail. This article attempts to provide a basic overview of working with AutoShapes using VBA and touch on some areas that are not covered extensively in the help documentation.

Two properties of the Shape object will be used in the code samples below – Shape.Type and Shape.AutoShapeType. Excel has a broad range of shape Types consisting not only of AutoShapes, but also connectors, lines, pictures, charts, comments, and many other graphical items. For AutoShapes, the AutoShapeType property lets you get/set the type of shape as shown in the gallery image below. 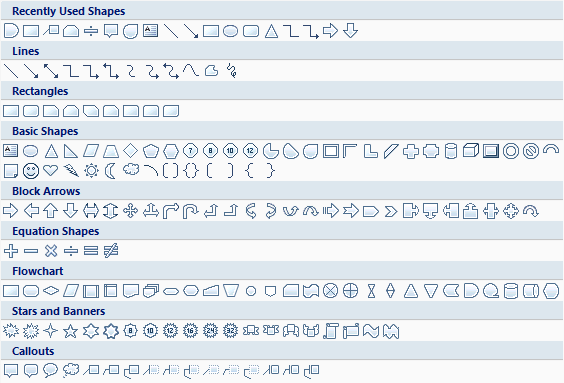 Callouts are another special type of shape that can cause confusion. They are discussed more in the Miscellaneous Issues section below.

Each worksheet contains a Shapes collection consisting of Shape objects. Like other collections in VBA, the Shape object is accessed either via its name or index number, as in:

Or, using the For…Each syntax:

The syntax for adding a shape is:

The AutoShapeType is a constant that ranges from 1 to 137 for Excel 2003 and earlier versions. Excel 2007 added shapes 139 through 183. AutoShapeTypes 125-136 are special AutoShapes. The online help file states that they support mouse over and click events, but that only applies when they are used in PowerPoint presentations. You can use them in Excel but they don’t have any special properties.

To see what the AutoShapeType constant is for each AutoShape, you can copy and paste the following code into the Excel Visual Basic Editor and run it (or download the sample file and run the macro). Not all the AutoShapes are available in the Shapes gallery, so this will also give you a look at some of the hidden ones.

The Left, Top, Width, and Height parameters of AddShape() are specified in points. The origin is the top left corner of the worksheet, with the Left and Top values increasing to the right and down, respectively. Dealing with points on a worksheet isn’t intuitive, so if you prefer you can add a shape to a given range address by using code like this:

Adding Text to an AutoShape

The Shape object has both a TextFrame and TextFrame2 members. The TextFrame2 member was added in Excel 2007 and gives better control over the formatting of the text. Because it is not backward compatible, I would recommend using the TextFrame object, as shown in the following code.

If you take advantage of the built-in styles for Excel 2007 and Excel 2010, setting the AutoShape formatting is ridiculously easy compared to Excel 2003 and previous versions. Excel 2007 introduced the ShapeStyle property with the 42 preset styles shown below.

The style numbers can be set using a simple line of code:

Where Shape is the shape object and XX is the style number. The style numbers are shown in the image gallery in order from left to right, top to bottom. For example, the red button in the second row is msoShapeStylePreset10. 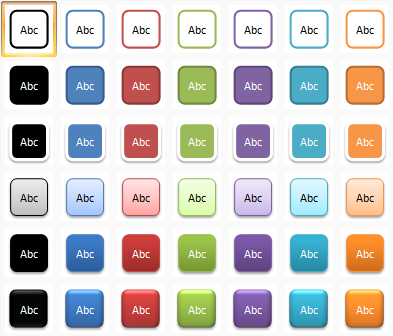 Connectors and lines are different objects in Excel. Connectors are special lines  that “connect” to shapes, and if the shape is moved the connector stays connected and reroutes accordingly. Connectors cannot connect to other connectors, but they can connect to the end point of a line.

The syntax for adding a line is straightforward:

…with all coordinates as Singles. Adding a connector is a bit more complex, since you typically want it to connect two shapes. The code below calculates the begin and end points, creates the connector, attaches the connector to the two shapes, then finally does a reroute to ensure the shortest path.

Several points worth mentioning are:

Like AutoShapes, formatting Connectors and Lines is fairly straightforward in Excel 2007 and 2010. Here is a comparison of two formatting routines for older versions of Excel versus the newer versions:

The Connector property, used above, returns a Boolean indicating whether the shape is a connector. The Type=msoLine statement checks if the shape is a line. In this case the code will format both connectors and lines the same way, but at times you may want handle them separately. (NB: The Insert Shapes gallery of Excel 2007 only lets you add Connectors, not Lines. So unless you are dealing with legacy files or add Lines via code, testing Type=msoLine may never be an issue for you.)

Like the shape styles, you can format the line style by setting the ShapeStyle to one of the msoLineStylePresetXX values, where XX matches the order they appear in the style gallery (below) from left to right, top to bottom.

Here are a few Excel 2007 issues with AutoShapes that are good to be aware of :

The sample file includes three demo sheets. The ShapeDemo sheet contains a macro to add two shapes, format them, then add a connector and format it. The Animation sheet has a simple macro showing how to move a shape around the sheet. The CreateAutoShapes sheet has a macro to create all AutoShapes available in your version of Excel.

The ShapeDemo routine has two function calls that are commented out – IlluminateShapeText2003() and IlluminateShapeText2007(). These subs add some gaudy formatting to the first letter of each text block, but they serve to highlight some of the differences between Excel 2007 and previous versions. Two parts of the code worth looking at are the HasText property and the formatting properties of TextFrame2. With the old TextFrame object, you would have to try accessing the TextFrame.Characters.Count property, which throws an error if no text exists. As for the formatting, the font colors in Excel 2003 and previous were limited to the colors in the pallet. In Excel 2007 and 2010, you can add reflections, drop shadows, and glow as well as set the color to whatever RGB value your heart desires.

Lastly, there is a module MCommon containing a sub that deletes all the AutoShapes on a sheet. In order not to delete the command buttons on the sheet (which are shapes too), it creates a ShapeRange of the AutoShapes and deletes that. The online help file shows the syntax for creating a ShapeRange when you know the names of the shapes at design time, but the syntax is a bit tricky when creating one dynamically. The DeleteAllAutoShapes() sub in the sample file shows you how to do this.

Nicholas Hebb is the founder of BreezeTree Software and author of FlowBreeze Flowchart Software, an add-in that automates flowcharting in Excel.