The Peltier Tech Advanced Chart Utilities for Mac is here.

Over the past month a month, I’ve converted the Advanced Edition of the Peltier Tech Chart Utility so that it works on a Mac as well as in Windows. I’m pleased that every feature from the Windows version has made it into the Mac version, though some options are not available. This is due mostly to the inconsistencies between Office on the Mac and Office in Windows, such as the unavailability of modeless forms and the reduced selection of Paste Special options in MacOffice. A few differences relate to incompatibilities between the two platforms themselves, such as the strange special keys and special key behavior on the Mac (somehow the Mac’s Cmd-Ctrl-Opt-Shift keys provide less functionality than Windows’ Ctrl-Alt-Shift). The lack of a customizable ribbon in Mac Office means the user experience is less fulfilling than in Windows.

In addition to the charts shown here, any new custom charts developed by Peltier Tech will become part of the Advanced Edition. If you hear from the Peltier Tech twitter feed, the Peltier Tech Facebook page, or the Peltier Tech Blog that a new chart has been added (or a bug has been fixed), email for a new download link so you can keep your license up-to-date. 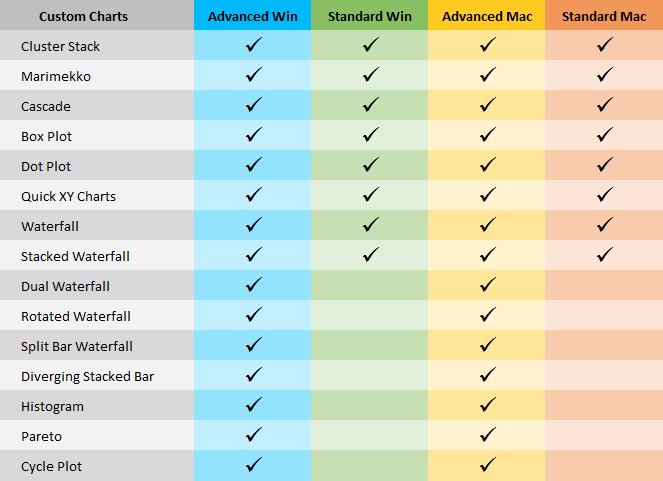 In addition to the helpful features of the Standard Edition, such as Edit Series Formulas, Copy and Paste Series Formats, Label Last Point, and Export Chart as Image File, the Advanced Edition adds such items as Export Range as Image File, Export Charts to PowerPoint and Word, Switch X and Y, and a simpler Error Bar Manager.

In addition to the features shown below, any new functionality developed by Peltier Tech will be added to the Advanced Edition. If you hear via the Peltier Tech twitter feed or the Peltier Tech Blog that a new feature has been added (or a bug has been fixed), email for a new download link so you can keep your utility current. 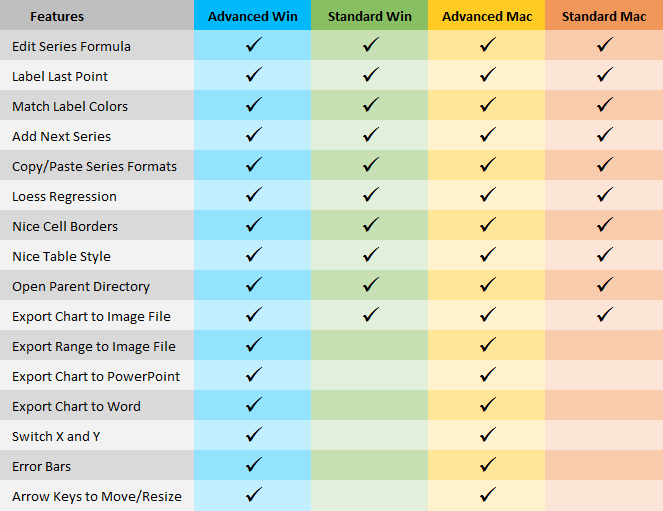 The Advanced Edition for the Mac runs on the latest updates of Excel 2011 for the Mac, and the relevant versions of the Mac OS that supports Excel 2011.

The Advanced Edition retails for $99, just slightly more than the $79 for the Standard Edition. But there are some great introductory deals: