Yesterday we were treated to discussions about the visitor stats of several Excel bloggers:

I thought it would be interesting to compare some of my favorite blogs and web sites. Unless you have access to the data for each site, it’s not so easy. One service that lets you make comparisons is Alexa. Using Alexa you can compare up to five sites in a number of categories. I usually look at Reach, Pageviews, and Traffic Rank, which are defined by Alexa as follows:

Reach measures the number of users. Reach is typically expressed as the percentage of all Internet users who visit a given site.

Pageviews measure the number of pages viewed by site visitors. Multiple page views of the same page made by the same user on the same day are counted only once.

Traffic rank is based on three months of aggregated historical traffic data from millions of Alexa Toolbar users and data obtained from other, diverse traffic data sources, and is a combined measure of page views and users (reach).

I plotted a few groups of data, since Alexa only allows five curves on a chart. Since this is my blog, I plotted the Peltier Tech data on all charts, as a benchmark. In the first group I plotted Daily Dose and Spreadsheet Page. Then I wondered whether John Walkenbach’s old site, J-Walk.com, is still getting traffic, taking away from Spreadsheet Page. Finally I added old pal Tushar Mehta’s site, since he’s been around a long time (after j-walk.com but before peltiertech.com).

I’m pulling a slightly larger audience than the other sites, according to the Reach figures. I don’t know what the spike is in early May: it doesn’t show up in any other website analytics service I follow.

Daily Dose and Spreadsheet Page are close to each other, and it looks like j-walk.com still has a significant presence. John could do some .htaccess magic to transfer the link juice to his newer site.

It would be nice to be able to rescale the Y axis, maybe 0 to 0.007%, to provide a little resolution at the low end. Or maybe use a log scale. 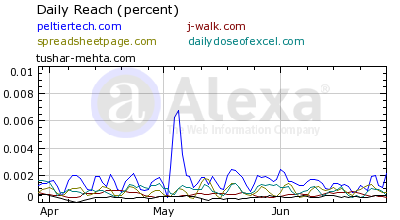 Pageviews is a hard chart to analyze. Again, stretching the Y axis to scale from 0 to 0.0002% or using a log scale would spread out the low-end values. 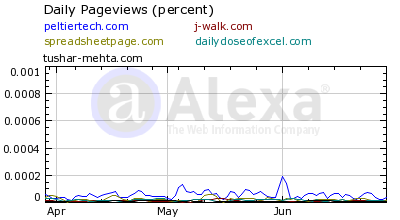 Traffic Rank is shown on a logarithmic scale. I don’t know what kind of algorithm Alexa uses to get Rank from Pageviews and Reach, but it must be somehow multiplicative. A slight advantage in both measures of Peltier Tech over the others means Peltier Tech is visible near the bottom (actually, alternating above and below the X axis), while the others are apparently below the axis. 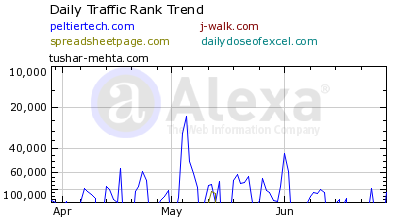 Chip pretty much owns the rest of us in terms of Reach, except for my early May spike, and Chandoo’s Lifehacker spike in mid-June. Debra’s site is consistently close to Chip’s and a bit higher than mine. PHD and Spreadsheet Page track each other fairly closely, except for Chandoo’s spike in June. 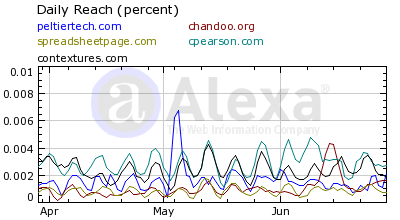 As before, the inflexible Y axis scale makes Pageviews simply a reminder to mow the lawn. 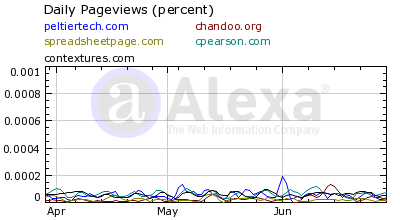 Traffic Rank shows all of us venturing into visible territory, with the relative placements similar to those shown in the Reach chart. 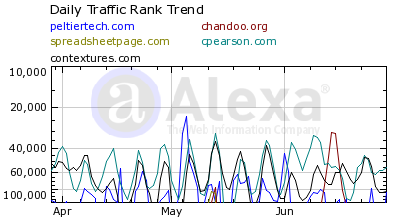 To put this all into perspective, I decided to compare my site to a few larger ones, namely Amazon, Microsoft, and Google. These sites are a little more popular, so Alexa’s Y axes expand upwards to accommodate them (and push my data ever lower in the charts).

If you look closely at the Reach chart you can see Peltier Tech: it’s the blue line obscuring the X axis. Compared to Google, Microsoft and Amazon are near the bottom. On a log scale, they’d be much closer to Google than to Peltier Tech. 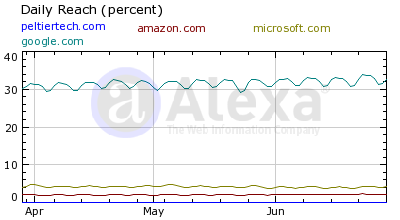 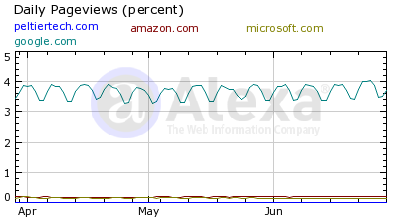 At least the Peltier Tech site shows a little texture in Traffic Rank. Good thing that’s a logarithmic scale! Google’s rank serves as the gridline for Y=1. The log scale also helps MS and AMZ stay near the top of the chart, with ranks around 15 and 30. 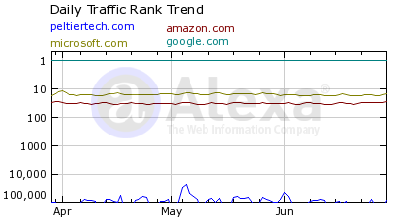 So what does all of this mean? I don’t know, but it’s a fun way to kill a little time. I guess I can rest assured that the Peltier Tech web site is in the middle of the pack of the popular Excel sites. But if all of you readers tell your friends, and twitter all about my site, and your friends all post on FaceBook about Peltier Tech, and I don’t know, we throw in a little MySpace and Digg and Technorati and other funny sounding words, and the momentum grows, I’ll probably still be firmly lodged in the middle of the pack.