In Liquidations – Map Visualization, Tony Rose of DSA Insights reviewed a set of charts created by Business Week (click on the image below for the original full-size graphic). Tony described some shortcomings of these

The graphic consists of bubbles representing the numbers of store closings within a state, centered on the state. This is like the dots used for representing cities on a map, with different sized dots for city populations within a certain range. Business Week obviously tried this, but a cartographer uses dots which are small compared to the distance between cities. Business Week’s charts have some bubbles which run into each other in regions where states have small geographical areas but high store densities. The northeast region of the Circuit City map (left) is difficult to resolve, and the same region of the KB Toys map (right) has such severe overlap, that it’s impossible to read.

A second issue relates to the sizes of bubbles in the legend and in the maps. Apparently the maps and legend were created separately, then resized independently while building the overall graphic. For example, the Circuit City map has five bubble sizes, the largest (CA) being 40 pixels wide and the second (TX and FL) 27 pixels wide. The legend also has five bubble sizes, the two largest being 26 and 17 pixels. Without counting the different sizes and translating the set of legend bubbles to the set of map bubbles, it is all too easy to misinterpret the values.

While it is a nice touch to see which regions of the country have high and low values, the way the bubbles were used make this less effective than a color-coded heat map of the states would have come out. Of course, the heat map suffers from distortion due to states with smaller geographic areas having higher store densities.

Can someone think of a better approach than the bubble map? What’s wrong with a bar chart? We can use the actual values, not an arbitrary range, and sort them by this value.

After examining this bar chart, a second chart might show a heat map of the states, with white, light, medium, and dark shades of a single color. 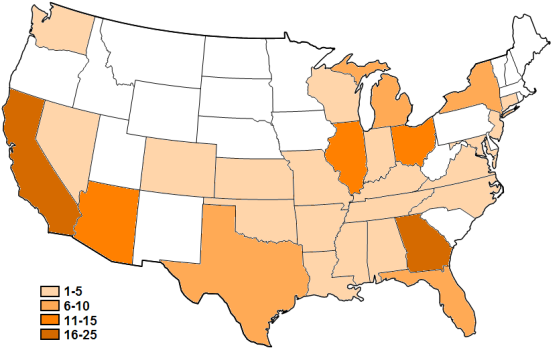 If you wanted to, you could color code the bars in the bar chart to match the area colors in the map.