In Dating Site Photo Effectiveness I proposed dot plots to show how different topics of profile pictures lead to different success rates of attracting attention from potential dates. The original analysis in The 4 Big Myths of Profile Pictures used bar charts which were potentially confusing because the origin of the bars was not zero, but instead was the average of all the data. Since my earlier post, Nathan wrote Get a Date With Your Online Profile Pic – Myths Debunked in his Flowing Data blog, and I was inspired to write about some simple graphical statistical tools. 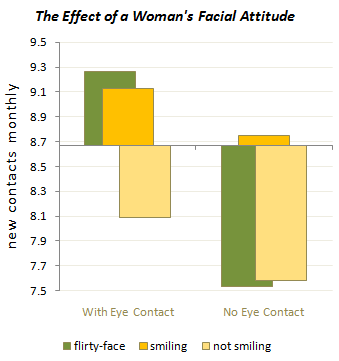 Bar charts show the data reasonably well. When the bars overlap, they may lead to conclusion, because the front bars partially obscure the back bars, and the back bars may appear smaller than they actually are because of this obstruction. It’s also not as easy to see the relative effects.

When performing a statistical analysis, one of the simplest graphical tools at our disposal is a Main Effects Plot. This plot shows the average outcome for each value of each variable, combining the effects of the other variables as iff all variables were independent. In the chart below, we see that the averages for smiling (with and without eye contact) is highest, the average for not smiling is lowest, and flirty-face lies in between. The average for eye contact is greater than for no eye contact (for all facial expressions combined). We could have estimated these effects from the bar chart above, but it’s helpful to take the time to plot these effects. 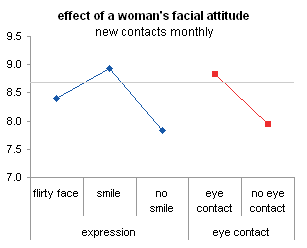 The data is shown below, with ranges shaded to match the color of the plotted points. The two columns to the left of the data are used to produce the two-level category axes in the charts. There is no need to label the series, since the series identification is simplified by these dual axis labels.

Note: I’ve used simple averages from the data in the original article’s charts, but in a real analysis you would have to weight the averages by the proportion of individuals using each level of each factor.

The main effects plot is simple and does not provide a great deal of information. Showing just the main effects of each factor level without accounting for the levels of other factors is simplistic and misleading.

Another graphic statistical tools at our disposal is called an Interaction Plot. This type of chart illustrates the effects between variables which are not independent. Such a plot looks like the charts here. There are two versions, to illustrate better the effects of eye contact and of facial expression.

In fact, the original bar chart above shows interactions between factors, but it is more effective to use markers with connecting lines to display the data. 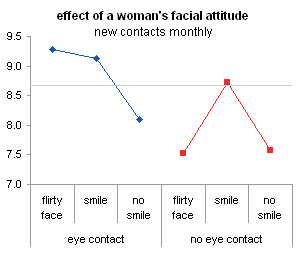 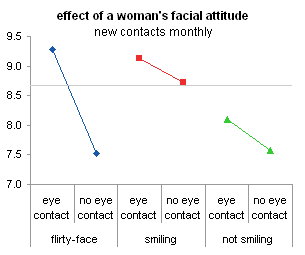 The two charts need independent data ranges. The two columns to the left of the data are used to produce the two-level category axes in the charts. There is no need to label the series, since the series identification is simplified by these dual axis labels.

An alternative and perhaps more common layout for interaction charts is shown below. As above, the two versions emphasize the effects of facial expression and of eye contact. 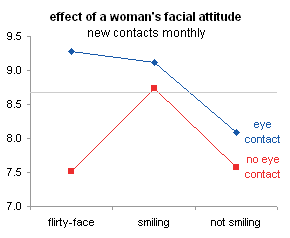 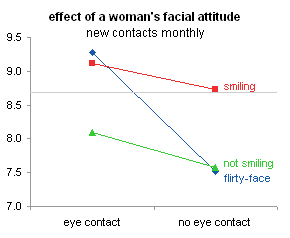 The series use the same single tier of category labels, and the lower tier of labels has been replaced by data labels on the series themselves. This alternative has the possibility of becoming more cluttered, but it also shows interaction effects more clearly.

These two charts can use the same data range, using either columns or rows for the series data. Using series names as data labels adjacent to data points effectively identify the data.

The same approach above provides insights into the photo effectivemess for male subjects.

Here is the original bar chart. 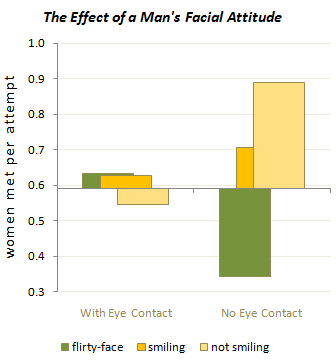 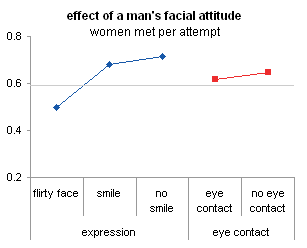 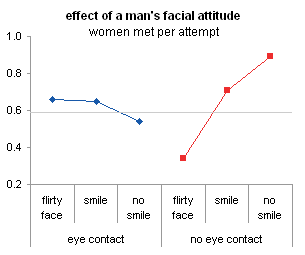 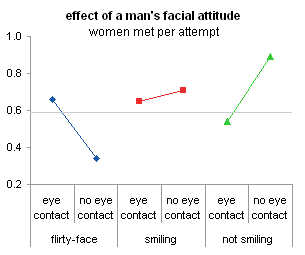 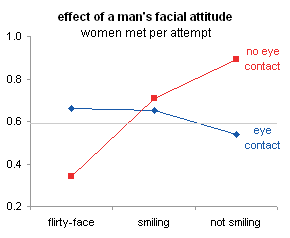 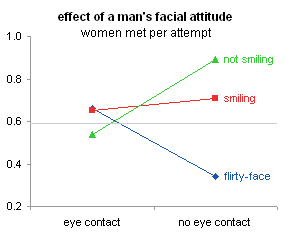