Chandoo has posted the new Microsoft Ads in Microsoft says ‘I am PC’ and it is brilliant. Contrary to my expectations, especially after the abortive Bill and Jerry spots, I enjoyed these ads. Microsoft finally has countered those insipid Mac vs. PC ads (see review in Slate), in a tasteful and clever way. Hey, I am PC too.

I thought I’d see just how PC my readers are. I checked my FeedBurner stats for the last 30 days, ending 9/21/2008, and here is the breakdown of operating systems. 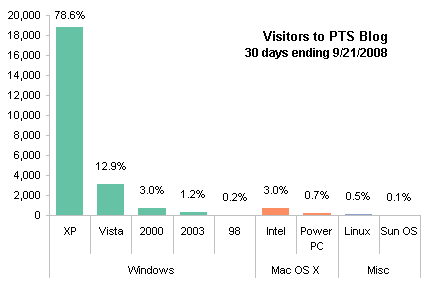 This fits pretty closely with my overall web site stats, too, which totals around ten times the traffic, but in FeedBurner it’s easier to get a quick list of numbers, and FeedBurner lists the versions of each OS.

So what’s all the buzz about Macs lately? Macs make up around 4% of my visitors. For every Mac visitor, I get more than 26 Windows visitors.

What’s all the buzz about Linux? Linux counts for 1% of my traffic if I round up.

Windows includes 95% of my traffic if I round down, and over 80% of that is XP. I guess the significant buzz is that under 20% of my Windows hits are from Vista.

I decided to compare the past month with the same month last year, which meant Google Analytics, since FeedBurner only goes back to March when I launched the blog. When I plotted the two months, the raw visits showed only that Windows and Mac visitors both increased, but there seemed to be a gain in percentage of visitors using Mac at the expense of percentage of visitors using Windows. (I neglected all the minor operating systems, but I will note that during each of these months I got two hits on Nintendo Wii.)

This needed further investigation, so I collected data for the months in between. Raw visits showed a general up trend in Windows users, while Mac and Linux were lost in the weeds. 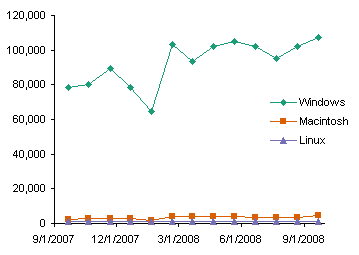 On a percentage basis, Windows was up in the mid 90s, with a hint of a downward trend, and a gain, Mac and Linux were too low to resolve. 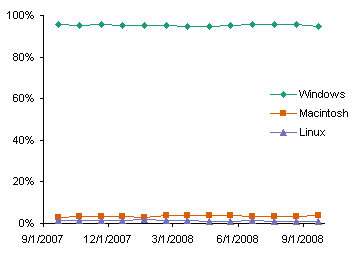 Putting the data on a log scale flattened any trend in the Windows line, while it made Mac and Linus easier to see. There is possibly an upward trend in Mac and a downward trend in Linux. It’s sough to call, given the fluctuation in both lines. 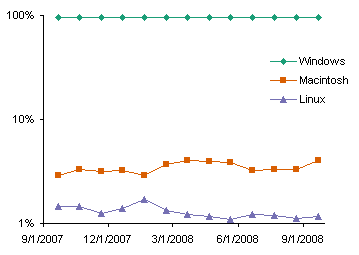 To evaluate the trends, I added trendlines. These do in fact show slight slopes in the directions indicated above. The slopes are very small, and correspond to changes on the order of a fraction of a percent per year. The R² values are also pretty low, indicating rather poor correlations. 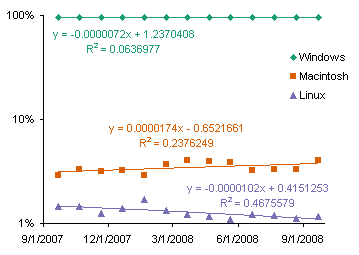 My conclusion is that Linux and Mac make up a very small fraction of my readership, averaging 1.3% and 3.5% respectively over the past year. Sorry, guys. No offense, but this supports my decision to concentrate on Windows versions of my utilities. My utilities are built in Excel 2000 and VBA 6, and so are compatible with Excel 2002, 2003, and even 2007. However, they are incompatible with the older VBA 5 found in Excel 97 and Mac Excel. In fact, Mac Excel 2008 doesn’t even support VBA at all.

Microsoft released Mac Office 2011 after this ancient article was posted. It included VBA, which had been removed from Mac Office 2008, and it had an uncustomizable ribbon to go with the usual Mac menu bar. I was able to write a version of my Excel Charting Utility that is compatible with Mac Excel 2011, and includes every feature present in the Windows version.

During this time, Mac traffic on my blog has increased, to over 5%, and sales of Mac versions of my software is around 10% of Windows sales.

Microsoft will soon release Office 2016 versions for both Mac and Windows. I am working on upgrades to my Utility, so that one add-in will work in both Windows and Mac computers. This is not just adapting the utility to Office 2016, there are also new features being added. Unfortunately changes in the Mac OS and in Office mean that I may not be able to completely mimic all Windows features on the Mac, but I am trying my darnedest.