This is a guest post from Jon Schwabish, an economist and data visualization creator. You can reach him at jschwabish@gmail.com or by following him on Twitter @jschwabish.

For a few weeks now, The Washington Post has posted a gallery of charts to help explain what is meant by the ‘Fiscal Cliff’, a series of tax increases and spending cuts that is scheduled to occur at the beginning of next year. The full slide show can be found at The ‘fiscal cliff’ explained in charts.

There are 7 charts in the collection, and although most of them are simple bar charts, from a data visualization perspective, they fail in various dimensions.

So I decided to issue myself a personal challenge: Redesign all 7 charts following 5 basic rules.

The Charts: Before and After 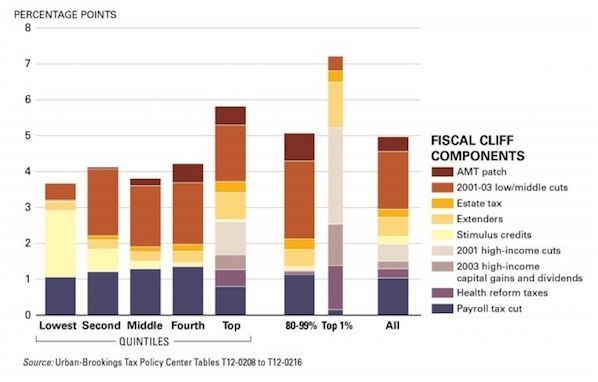 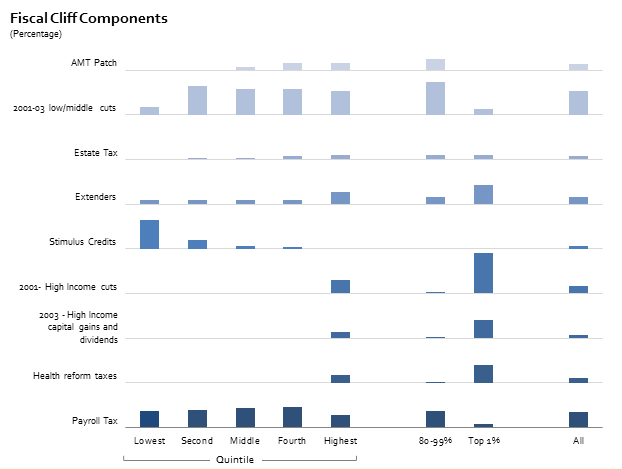 This was probably the most difficult chart to redesign. On the one hand, you might want to focus on the increase in the average federal tax rate by income quintile (the height of the bars). On the other hand, you might want to focus on the components of the fiscal cliff for each group (the portions of each bar). Combining those, however, clutters the attempt to visualize both goals. For my redesign, I chose to focus on the distributional analysis and sacrifice the imagery of the rising average federal tax rate as incomes rise. The second chart in this set—and the first in the original TPC document—tells me that basic story more clearly anyways. An alternative approach would be to use several small charts (‘small multiples’) and stack them together in some way, but I chose to stick to the spirit of the challenge and only redesign the single chart. Plus, had TPC made a series of small charts, it’s not clear to me that The Washington Post would have picked it up.

As for creating this in Excel, it’s a simple stacked column chart where the intervening series are set to an empty fill. The values of the empty fill series are set so that the heights of each section are equal. The labels on the left side are inserted using separate series added as scatterplots. 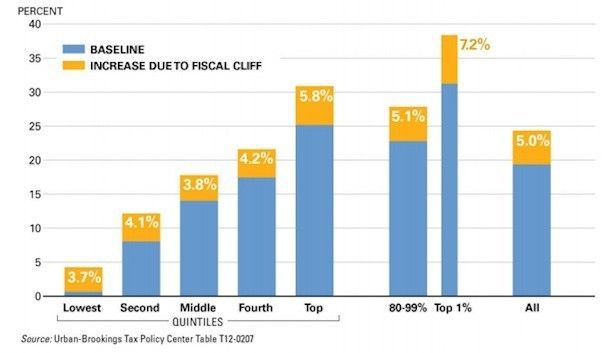 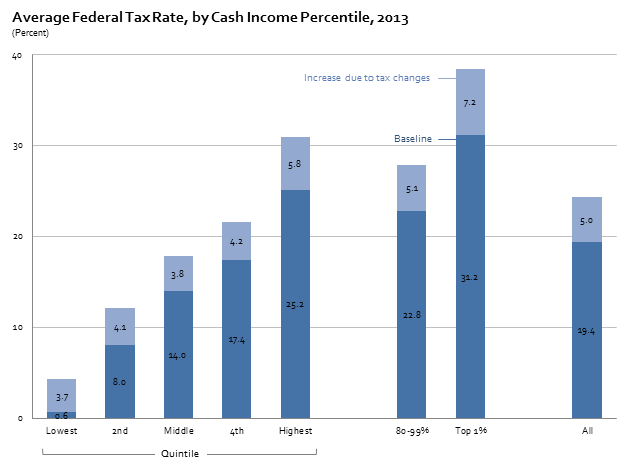 I didn’t like the yellow-blue combination here because it emphasized the effect of the Fiscal Cliff on the baseline, which may have been the intention, but I thought it was too much. I also moved the labels right onto the chart and lightened and reduced the number of gridlines.

Chart 3: Size Components of the “Fiscal Cliff” (The Washington Post, based on data from the Congressional Budget Office). 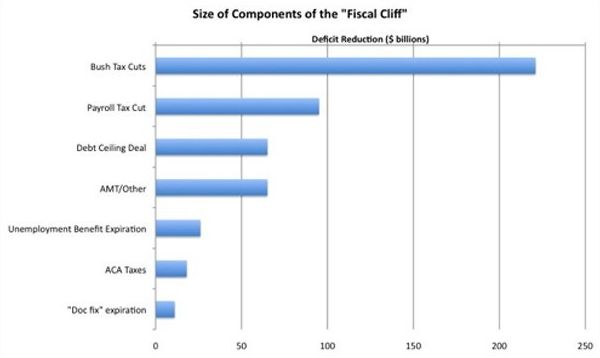 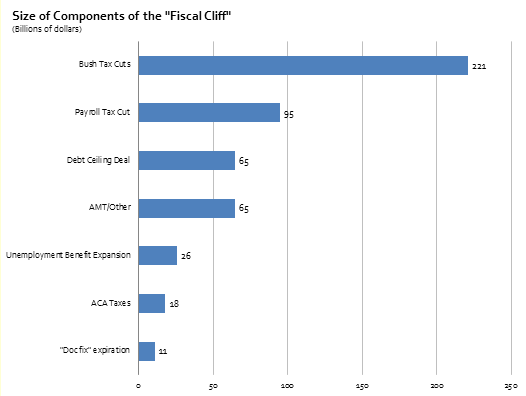 This simple redesign including lightening the gridlines, left-justifying the title, and adding the data to the chart. The original chart also appeared to have some sort of vertical gradient, which I found unnecessary.

Chart 4: Marginal Tax Rate Increase under Fiscal Cliff by Income (The Washington Post, based on data from the TPC). 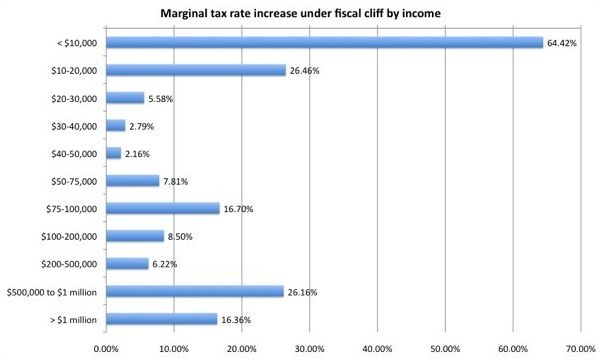 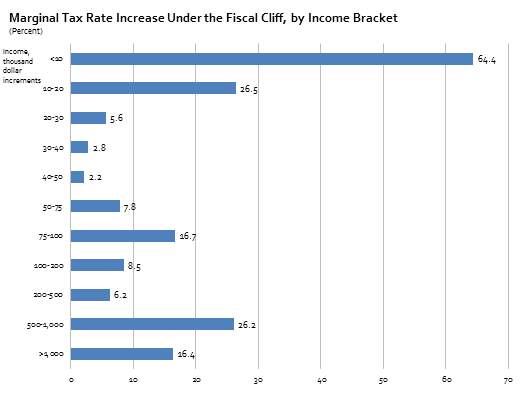 Similar to chart #3, I lightened the gridlines, deleted the gradient, and left-justified the title. I also simplified the y-axis labels by getting rid of the dollar signs and the thousands units and deleted the hundreds decimal points in the x-axis labels. 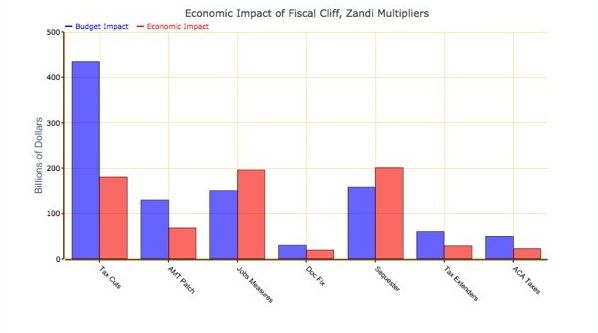 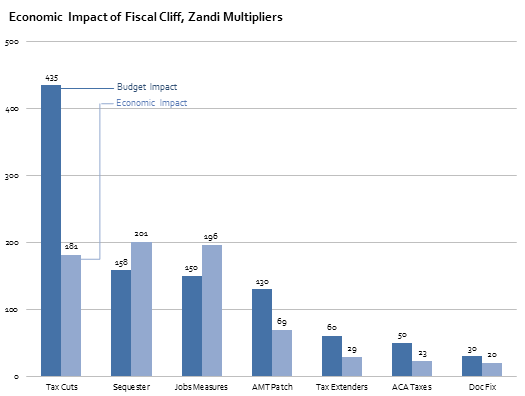 I lightened the gridlines and the heavy axis lines, moved the legend onto the graph, and deleted the outline of each column. (The outlines add three redundant elements to show the height of each column.) I also used a single blue color scheme; in the context of the Fiscal Cliff, which is inherently a policy issue, using blue and red invokes images of the two political parties, which is not really an issue in this graph. Importantly, I also sorted the data by the Budget Impact, which gives the graph both a more appealing look and a quantitative basis for ordering the groups.

Chart 6: Sequester Cuts to the FEMA Budget (in millions) (The Washington Post). 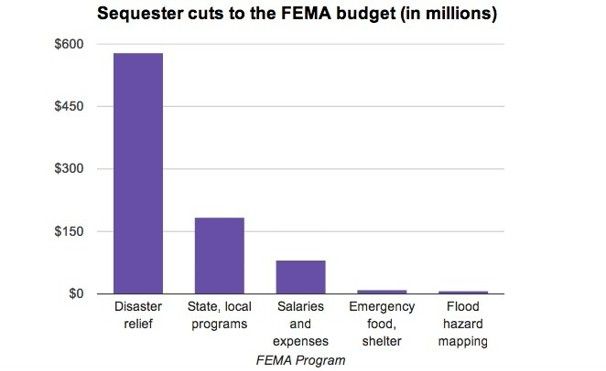 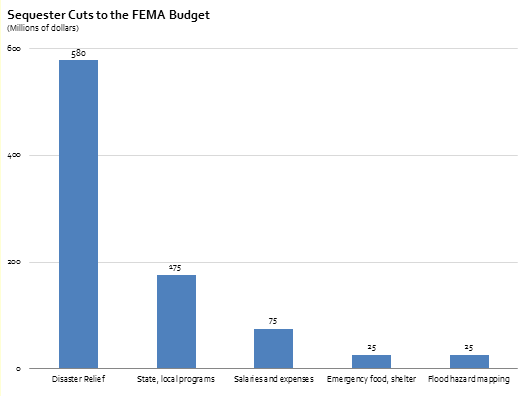 Simple changes: deleted the dollar signs; left-aligned the title; reduced size of “(in millions)” in the title; added data labels; and reduced the size of the x-axis labels.

Chart 7: Effect on Fiscal Cliff Components on Deficit and GDP (The Washington Post). 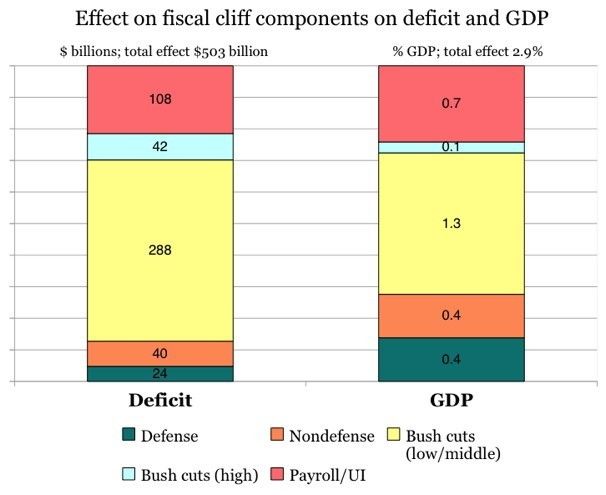 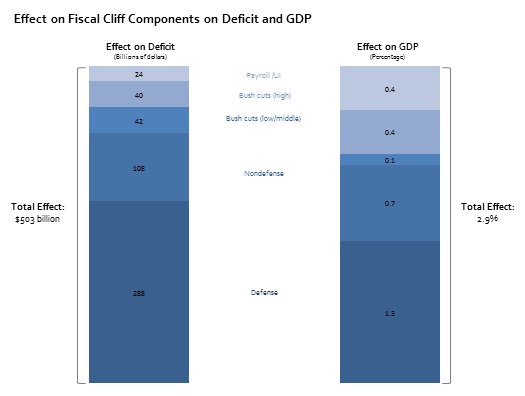 This chart probably resulted in the largest number of changes, but all of the decisions were so easy to make: sorted the data from smallest to largest; used shades of a single color scheme instead of the menagerie of original colors; moved the legend to the area between the columns; deleted the gridlines; left-justified the title; and put the Totals to the outside of the two columns instead of at the top, which looked terribly cluttered.