Earlier this year, I saw a BUSINESS INSIDER CHART OF THE DAY story called Microsoft Is Winning More Developers To Its Mobile Platform.  They showed how the proportions of new apps built by mobile developers were distributed among the four mobile platforms for the second quarter of 2011 and of 2012. Here is a reconstruction of their chart. 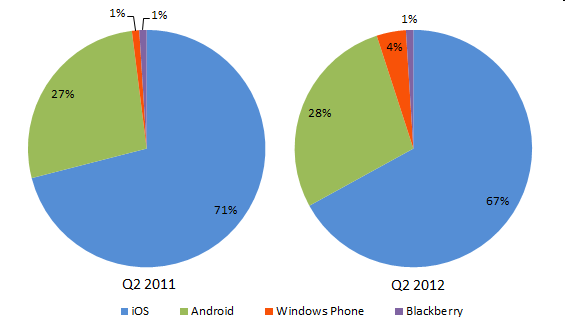 Yes, they used side-by-side pie charts with a distant legend. The data isn’t so complicated that this chart actually distorted anything, but it made the information hard to assimilate. They got their data from a nearly identical chart in Flurry Blog’s Microsoft May Be Closer Than It Appears in Android’s Rearview Mirror. I find this headline amusing, implying that Windows Phone was right behind Android in app development. Several other online channels picked up the same story from these two sources, and some even came to the conclusion that Windows Phone had not only Android but also iOS on the ropes.

It’s not easy to compare wedge sizes between separate pies (or even within the same pie), so I tried another approach. I built this stacked area chart. It’s easy to see that Windows Phone has gained and iOS has lost share, and that Windows Phone and Blackberry are nearly insignificant compared to Android and iOS. But we can’t really judge any change in Android without reading the data labels. 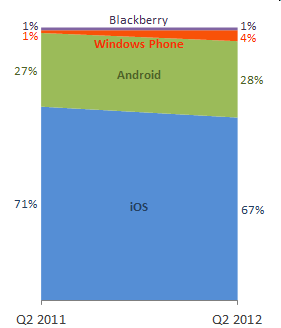 The Business Insider conclusion was that Microsoft was winning more developers. They could have shown this clearly with a single area chart, though it would have ignored the context of the rest of the industry. Of course, the data labels provide some context: even 4% is a very small market share. 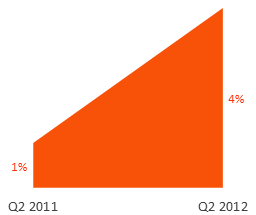 Probably the best way to show this data is with a slopegraph: a line chart with two categories, in this case, two dates, showing the changes in the values. This chart shows that iOS has the major share, more than twice Android in second place, and that Windows 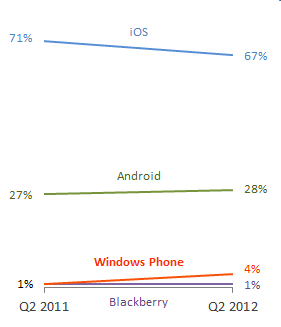 Here we can see a modest decrease in iOS, matched by a similar increase in Windows and a tiny increase in Android. Blackberry, thanks for playing. Since these changes are only a few percentage points, I’d like to see monthly or at least quarterly data during the year between the two endpoints, before drawing any conclusions.