Last month I and several of my colleagues descended on New Zealand and Australia for Excel Summit South 2016. This was a series of two-day Summit conferences, one each in Auckland, Sydney, and Melbourne.

The first thing I have to say is that our major sponsor PwC was a perfect host. Their facilities were excellent. Our sessions were in conference rooms on about the 20th floor of their towers in each city (the views sometimes making concentration difficult).

I had a chance to present my on my specialties (VBA and, uh, charting), but also to see what my fellow MVPs had to say on topics I should learn more about. I also got a glimpse into financial modeling, which is not something I usually think much about. The attention to detail and aversion to mistakes are things I aspire to, and it was instructive to see these in a new context.

Besides myself, the Excel MVPs in attendance were Liam Bastick (from Australia), Ken Puls (Canada), Charles Williams (UK), Bill Jelen (US), Ingeborg Hawighorst (New Zealand), and Zack Barresse (US). Liam talked about avoiding spreadsheet layout errors, problems with Excel’s various lookup functions, and studying sensitivity and running simulations without VBA. Ken and I did a tag-team presentation, where he started by showing how to use Power Query to fix up some ugly data from disparate sources and I showed how to turn his cleaned up data into a flexible dashboard. Ken later did a session on Power Pivot. Bill “Mr. Excel” Jelen did a session on data visualization using conditional formatting, another on pivot tables, and finally he showed some cool Power Map analyses. Ingeborg showed us how powerful are Microsoft’s web and standalone Power BI tools. Zack showed off some little known features of Excel tables, and Zack and I both discussed using VBA to make life easier. Finally Charles presented on making VBA run like the wind.

Ben Rampson and Carlos Otero from the Microsoft Excel product team were at the sessions. The presented information about where Excel is going, with the emphasis on BI and with the new versions running on whatever platform you can name (Windows, Mac, iOS, Android, etc.). Their presence is evidence of Microsoft’s recent opening up to customers and users, sharing their plans and listening to feedback and suggestions.

Attendance was pretty good, increasing in the later dates as word about the sessions spread. The technical level of attendees at this kind of session is usually high, since the audience is self-selected. But at these meetings I felt the people who attended were very good at their jobs and at Excel. They asked challenging questions, and conversations between and after the sessions were stimulating.

I met a number of people in person that I’ve known for years over the internet. Jeff Weir(d), who has posted on Chandoo’s blog and Daily Dose of Excel. Doug Jenkins, who writes about using Excel for Engineering problems at Newton, Excel, Bach. Ed Ferrero, a former Excel MVP who now runs a winery. Probably more as well, and when I remember I’ll add them here.

One of the great things about this kind of trip is getting to visit new places. I didn’t get to do a lot of sightseeing, so I plan to come back. I’ll see if my wife wants to come along.

Besides the scenery, the cities we visited had nice restaurants. Among noteworthy meals we had outstanding Middle Eastern food in Auckland, an extensive feast in a Brazilian barbecue in Sydney, and delicious Indian food in Melbourne. The coffee in even the simplest shops was far superior than most donut shops in the States, but I guess that’s to be expected. Somehow I only managed to put on a couple pounds.

I got to visit Tahiti, but only for two hours while they refueled the plane. The airport was very small, with one landing strip and a taxiway. On one side of the runway was ocean, on the other were neighborhoods and the small terminal building. I don’t suppose they get more than one or two jet flights a day, and you need to use the portable stairways to board the plane. 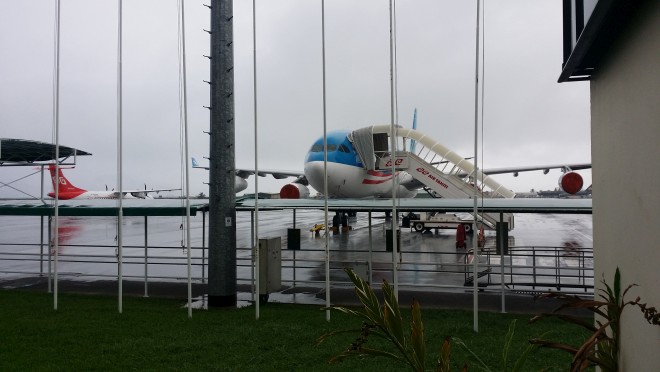 Our first real stop was in Auckland, New Zealand. It rained for a couple days, which was okay, because Ken and I were stuck getting our joint presentation working.

The view of Auckland Harbor from the PwC tower was awesome. 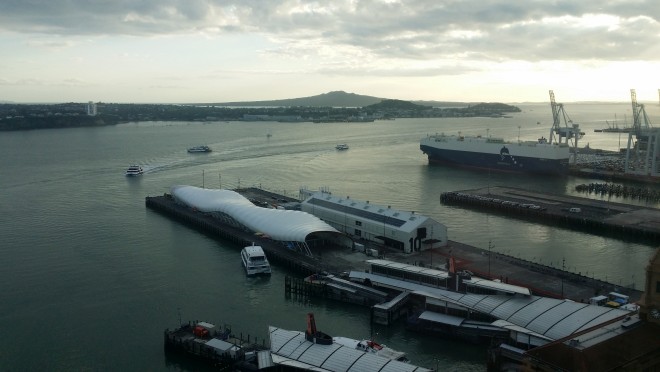 The Sky Tower looms over central Auckland. Our hotel was a block or two away, as were numerous restaurants and shops. 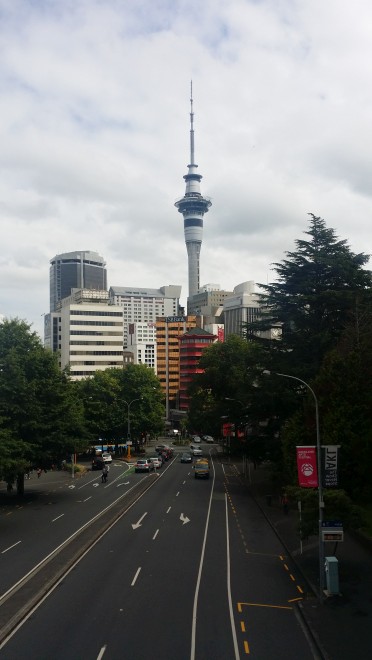 The weather in Sydney was gorgeous. My wife told me I’d better enjoy it, since it was snowing back in Worcester.

On a beautiful Sunday afternoon we took a ferry ride through the harbor. On the way we went under the Harbor Bridge and past the Opera House. 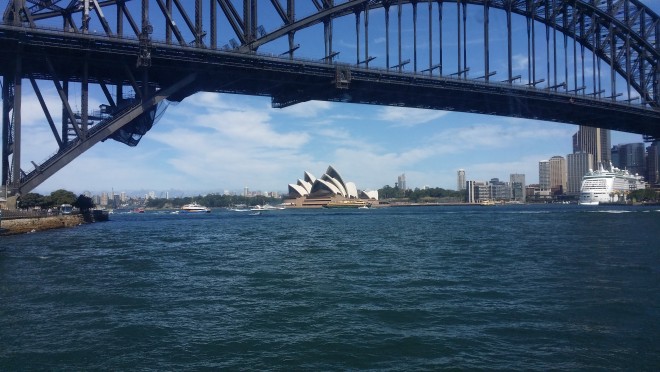 Our ferry ride took us to Manly Beach, which was very crowded because of a surfing competition. 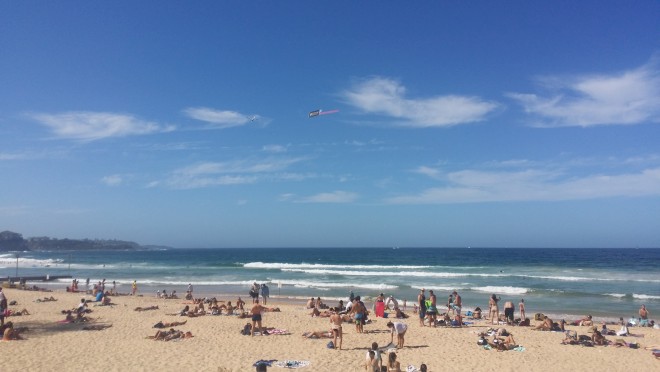 I got to sick my feet in the Pacific Ocean. Being from Massachusetts I usually only get to the Atlantic, but they’re equally wet. 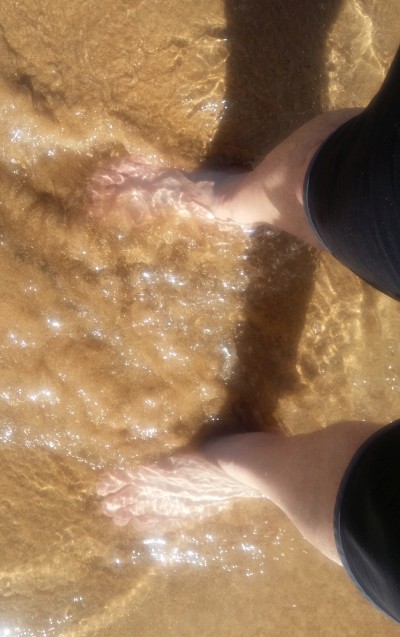 On the ferry ride back we again went past the Opera House. 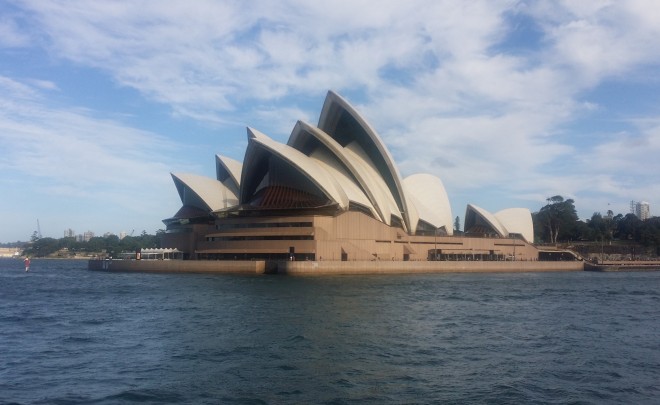 This mother and baby humpback were gracefully swimming over a stairwell in Darling Harbor, a small branch of the enormous Sydney Harbor. I was captivated by this intriguing sculpture, showing skeleton inside translucent plastic skin. 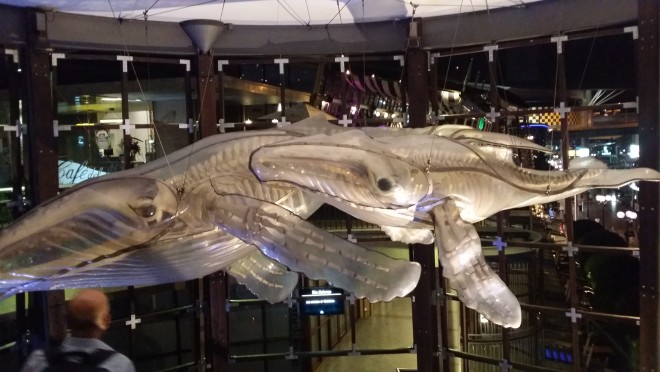 Early in the morning, you can see rowers on the Yarra River, like this single sculler and the half dozen or so in the distance. 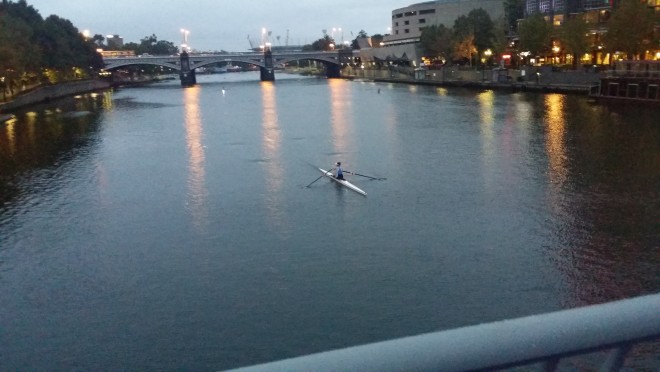 We took this scenic footbridge across the Yarra from our hotel to the PwC facilities. 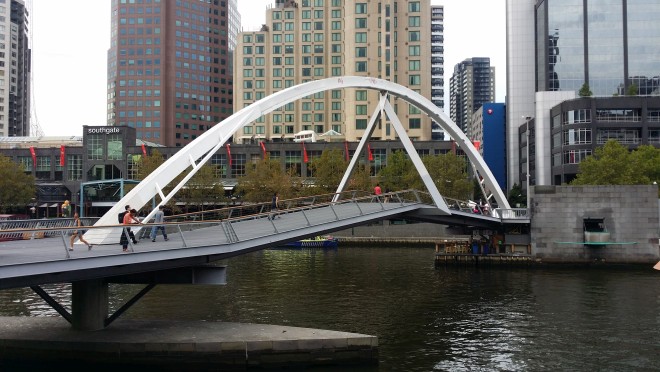 During a street festival on Friday night, Zack Barresse met up with a bagpipes-playing Cookie Monster. 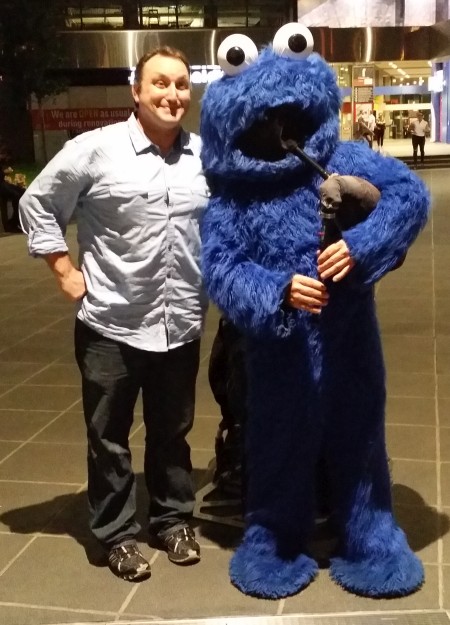 Zack wrote about our travels in Excel Summit South in Review.

All good things have to come to an end, so after two weeks I returned home again (which is also a good thing). On the first day of spring, a week after my return, Mother Nature greeted me with this springtime scene. 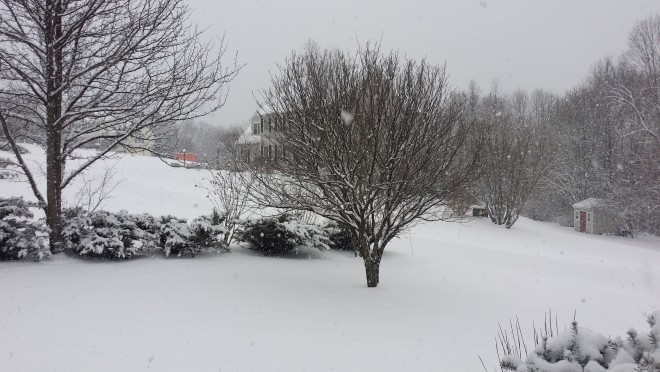 It was a very mild winter in Massachusetts, especially compared with last year. But since the springtime snow pictured above, we’ve had snow on two more days.