I’ve written frequently about panel charts, and I’ve made some simple ones, but I don’t seem to have explained the process in enough detail for people to reproduce them with their own data. This is one of several quick tutorials on easy panel charts. 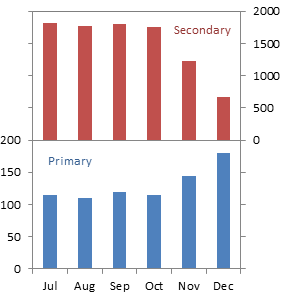 This article also answers the question, “How do I fix a column chart that has some series on the primary axis and some on the secondary axis?” The problem is that the secondary columns obscure the primary columns. Well, you can offset the columns so the primary ones are no longer obscured, but a far better approach is to offset the series, into separate panels for primary and secondary data.

Let’s use the following simple data for this exercise.

Values for the two data series fall within vastly different ranges, as seen in this column chart. 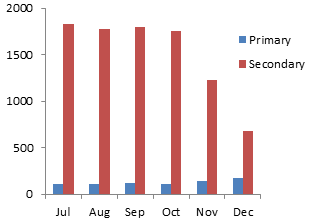 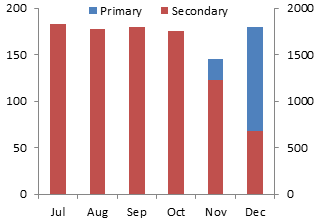 It’s possible to juggle hidden series to offset the primary and secondary data to either side. This doesn’t make the chart any easier to read than the original one-axis-scale chart we started with. Who can figure out, let alone remember, which data should be measured against which axis? 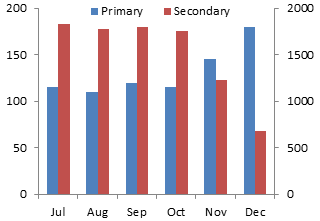 You can play the color-coding game, coloring all the axis labels and legend labels to match the bar colors. And it makes perfect sense to you. But that’s because you made the chart and did all the formatting. Show your handiwork to someone who hasn’t been working with the data, and the color-coded chart is clear as mud. And that’s if you’re showing it to someone with normal color vision. 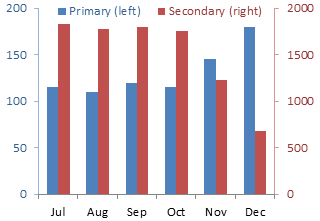 Don’t try to figure out this approach. The chart is just not easy to read.

Start your panel chart by making a column chart with the data. 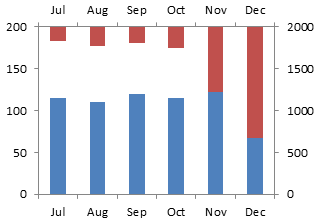 The Secondary series is hanging from the rafters, because the bars reach from the axis, which by default is at the top of the chart, down to the value. 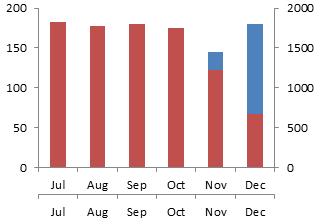 Give the plot area an appropriate line color, so there are lines on all four edges of the chart. 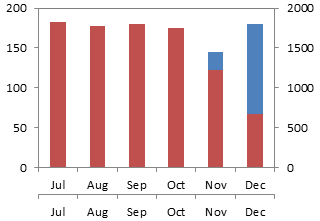 What we want is a chart divided into two panels like the chart below shows. I’ve temporarily hidden the plotted data, but you don’t need to.

If you have nice data, or if you’re good at algebra, you can pick axis scale parameters that align the axis tick marks on the left and right sides of the chart. The temporary gridlines in this chart show how nicely aligned these tick marks can be. 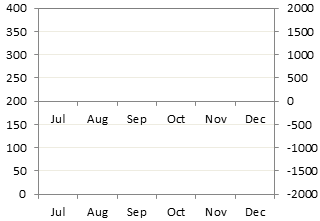 So the Primary series fits into the bottom panel. . . 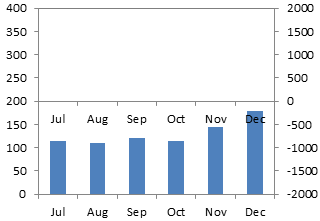 . . . and the Secondary series fits into the top panel. 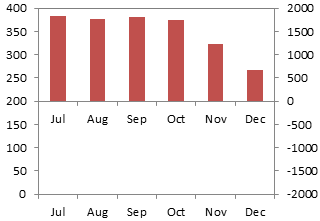 Here is how the chart looks with all of the axis settings applied, and with the data unhidden. 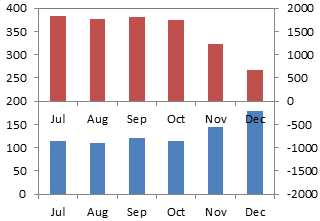 The unneeded month labels are easy to remove. Right click on the axis, choose Format Axis, and for Axis Ticks and Tick Labels, choose None. 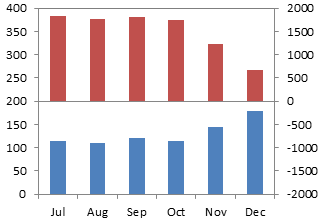 We need to apply some number format magic to the Y axis labels. I’ve written an article about Number Formats in Excel, but there’s room for a quick refresher class.

The secondary (right) axis is easy. We need a format like “0;;0;”. A number format has up to four elements, separated by semicolons. The first indicates what format to apply to positive numbers, the second to negative numbers, the third to zero values, and the fourth to text. A number format of “0” means simply show the numerical value without any decimal digits; “0.0” would mean show one decimal digit, “0.00” two decimal digits, etc. A missing format means don’t show anything. So this format tells Excel to format positive and zero values as whole numbers, and don’t show anything else.

The primary (left) axis is a bit trickier, but we can use simple conditions to turn formats on and off. The format we need is “[<=200]0;”. The expression in square brackets is the condition that sets the format. It says to display any number of value equal to or less than 200 as a whole number, and don’t display anything else. These conditions override the default positive-negative-zero sequence, but we can only apply two conditions, like “[one condition];[another condition];[all other numbers];[text]”.

Right click each axis and choose Format Axis. Select the Number tab of the dialog, click on Custom, and enter the appropriate format into the box (without the quotes). Don’t forget to click the Add button, or Excel will discard your carefully typed format. 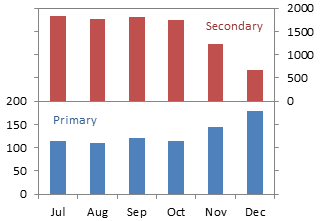 You can stretch the chart if you want more resolution in the Y values. 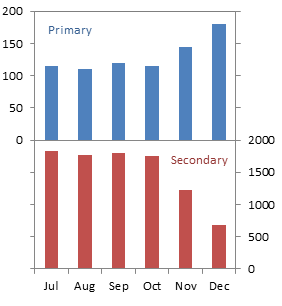 In upcoming articles I’ll show this technique applied to line and horizontal bar charts, but it’s essentially the same protocol, so I’m sure you could figure it out easily.