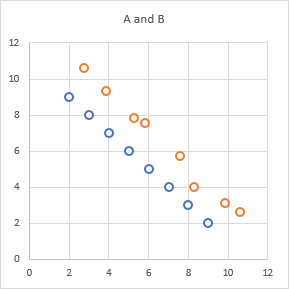 Several years ago I wrote Connect Two XY Series, which showed how to connect the points of one series to the corresponding points of another series. This approach used a third series with data from Series A and Series B, interwoven with blank cells. 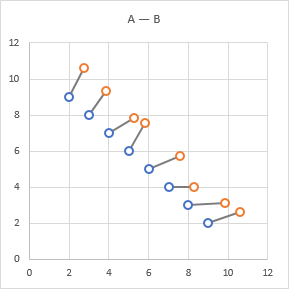 I followed this up with Connect Two XY Series with Arrows (VBA), which showed how to connect the two series with arrows. In Excel 2003 and earlier, you had to use VBA to draw the arrows, and this article provided the VBA (and it’s reproduced below). 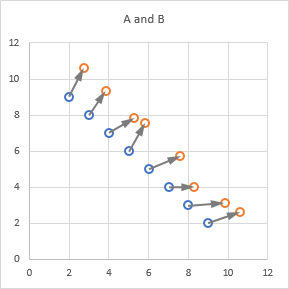 This works nicely enough, but the arrows are not tied to the points, but only to the original positions of the points within the chart. So if you change the axes in the chart … 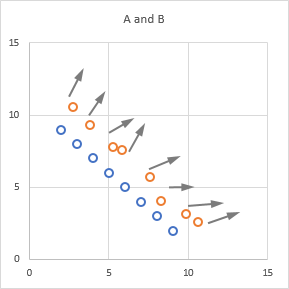 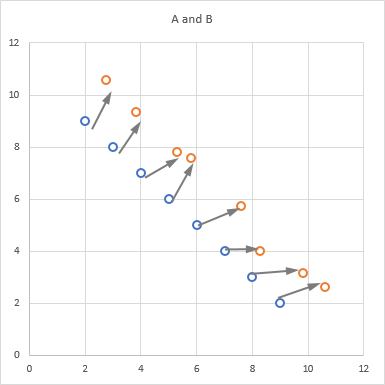 … the arrows no longer match up to the points.

You could always delete the misaligned arrows and rerun the VBA procedure, but what a pain.

I hinted in this second article that you could connect the points with arrows in Excel 2007, without using VBA but instead by formatting the third series that connected the first two series. But I never explained how. This article fills the gap.

Set Up The Data – Approach 1

Select the data, and sort by the column of digits you just entered. The data now has alternating Series A and B data (below right). 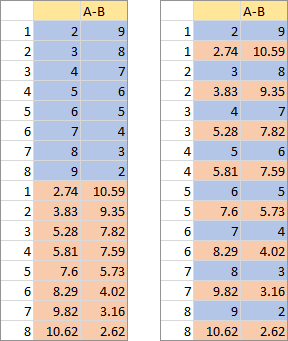 Select the data and create a chart, or add it as a new series to the chart of Series A and Series B. 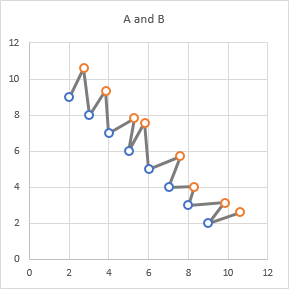 Hmmm, that’s almost what I want. But there are too many line segments. We need to eliminate half of them, shown as dashed lines below. 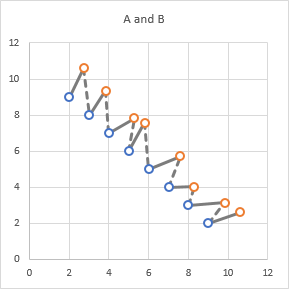 We could format alternating line segments to be drawn with no line, but that’s mighty tedious after the first or second segment. Speaking from experience, because I had to format the dashed lines in the chart above, segment by segment.

As I’ve written about in Mind the Gap – Charting Empty Cells, the way we get a gap between points in a chart is to have a gap in the data, that is, blank cells between the points.

So let’s alter our protocol above, so that we start with the Series A data, then the Series B data below that, then an equal number of blank rows at the bottom, and include our index column (below left).

Sort by the index column, to get Series A and B data pairs, separated by blanks (below right). 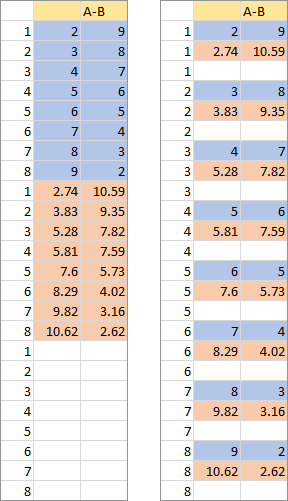 Now when we plot this data, we connect appropriate pairs of points, with gaps between points we do not want to connect. 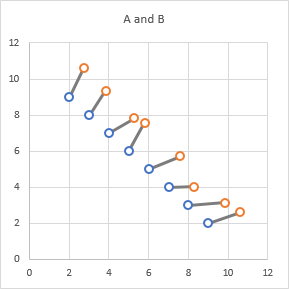 Set Up The Data – Approach 2

Above we produced our data range by copying the data into a new range, and sorting the data appropriately. We could instead have stretched out the data first, then copied and pasted using the Skip Blanks option.

Here’s a copy of the Series A and B data, with two rows inserted between each point.

Copy the expanded Series A data, select the first cell of a new range, … 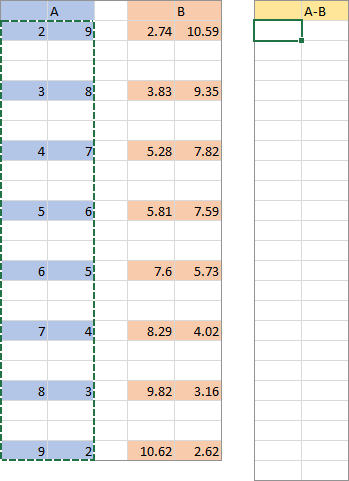 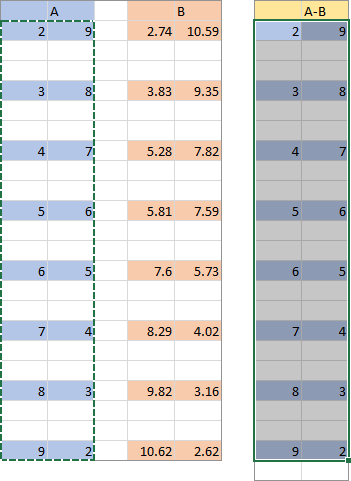 Now copy the Series B data, select the cell below the first Series A point, … 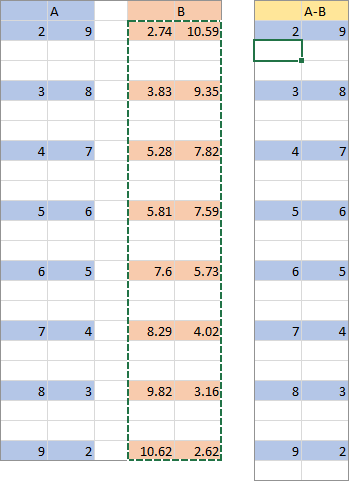 … and use Paste Special, and check the Skip Blanks option near the bottom of the dialog. Skip Blanks prevents blanks in the copied range from being pasted over data in the target range, so the Series A data is preserved. 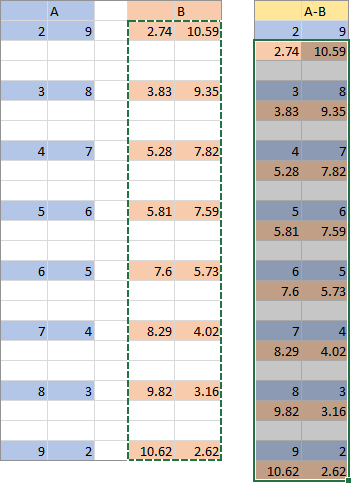 Now the data is ready to plot. 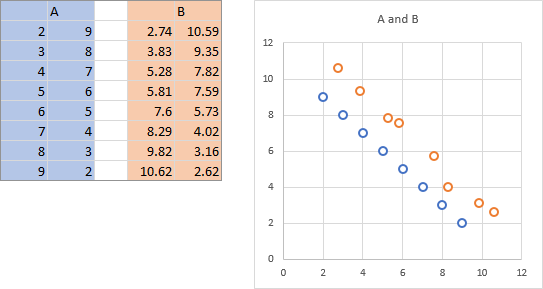 Now copy the A-B Interwoven data (below left), select the chart, and again use Paste Special to add this data as a new series, with series in columns, Y values in the first column, series names in the first row, to produce the chart shown below right. (You may have to format the new series to show lines and no markers) 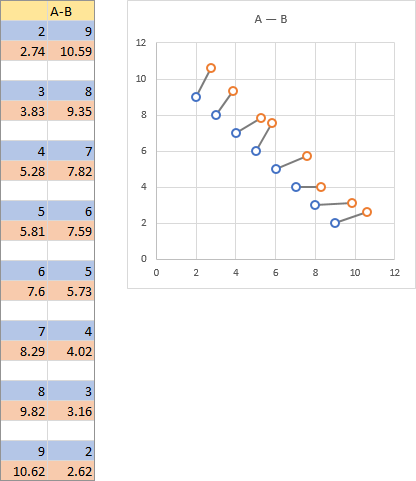 Now you need to format the line segments of the new series. Select the series and press Ctrl+1 (numeral one) to open the Format Data Series task pane or dialog. Click the End Arrow Type dropdown, and select the desired arrow type. The options include three arrowheads, a circle, a diamond, and a plain line.

Now click the End Arrow Size dropdown, and choose an appropriate size for the arrowhead. There are combinations of three arrowhead lengths and widths.

Now the line segments have been transformed into arrows. 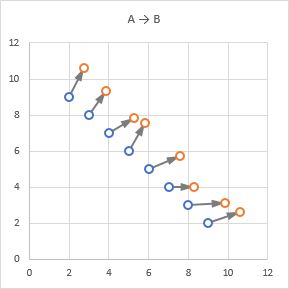 Unlike the VBA approach of the old tutorial, the arrows are tied to the points in Series A and Series B. So if you change the axes in the chart … 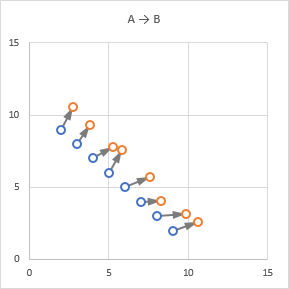 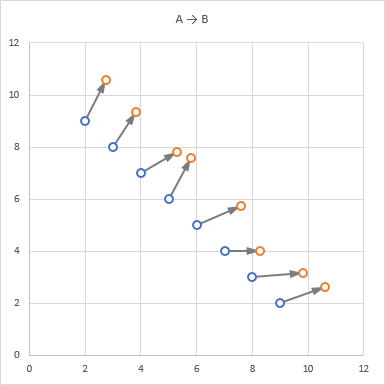 … the arrows still match up to the points.

You don’t need to use VBA to connect points with arrows, but it is a good sample application of VBA to your charts. Just so you don’t have to go back to the earlier post, here is the VBA Procedure that connects the points with line segments with arrowheads.