Earlier this month, the New York Times ran a series of articles investigating payoffs by Biotronik, a medical device manufacturer, to doctors at University Medical Center in Las Vegas, leading to Biotronik cornering that hospital’s market of pacemakers and defibrillators. The story in Tipping the Odds for a Maker of Heart Implants was accompanied by a chart (“multimedia presentation”) called A Quick Change in Heart Devices. The New York Times has published at least two follow-up articles, Tipping the Odds for an Implant Maker and Inquiry Into Payments by Device Maker. I’ve reproduced the New York Times graphic below.

It’s a series of donut charts showing the market share of Biotronik over the period during which the physicians were hired as consultants. From a market share of zero in 2007, Biotronik zoomed up to 95% in two years, forcing out their main rival Boston Scientific.

I’m not going to analyze the scandal, but I do want to examine the New York Times’ choice of graphics.

We all know the rationale for donut and pie charts: they show proportion of a whole. And as far as they go, each of these charts is reasonable for its purpose, to show the market shares of two or three vendors (treating “other” as a single entity). In all cases one segment of the chart is much larger than the others, and we get a good qualitative sense for the market at each point in time.

If I had seen any of these charts in isolation, I would not have though much of it. However, this visual uses several standalone snapshots to show how the market evolved. We can get a rough qualitative sense of the change from chart to chart, but to show trends it makes more sense to show data in a single chart than in a series of charts.

My first cut at the data was with a line chart, market share against year for the three entities. 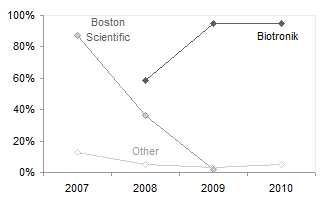 The lines in these charts draw the eye to the trends from year to year. To further clarify the trends, I decided to replace the blanks in the line chart with zero values, connected by dotted lines to the original values. 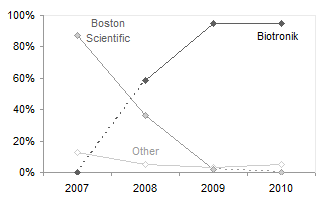 Suppose we still wanted to show a percent of the whole kind of chart, while maintaining the clear trends. I don’t use stacked charts often, but with only a few areas to consider, I thought I’d try a stacked area chart.

That shows the changing market shares pretty well, but an artifact of the stacking order (a danger of using such charts) makes it seem almost as though Boston Scientific is increasing. So I changed the order of the series. 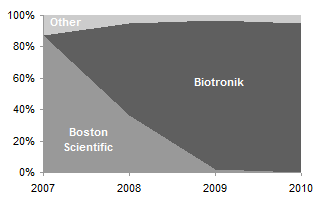 This chart gives a clear sense that Biotronic started from nothing, and expanded rapidly, pushing Boston Scientific off the bottom of the chart.

A Proponent of Donut Charts Chimes In

I first saw the New York Times donuts in Pie Charts and Doughnut Charts – Tension Releived! [sic] on Paresh Shah‘s Visual Quest blog, where he made much of the inherent Gestalt principles of stability and equilibrium in pie and donut charts. Paresh followed up in Gestalt Principles. Doughnut charts.Pies, in which he states that pies and donuts “satisfy the human craving for stability and equilibrium”. Well, I wanted to learn more about the relationship between pie charts and various Gestalt principles, so I Googled pie chart stability equilibrium: 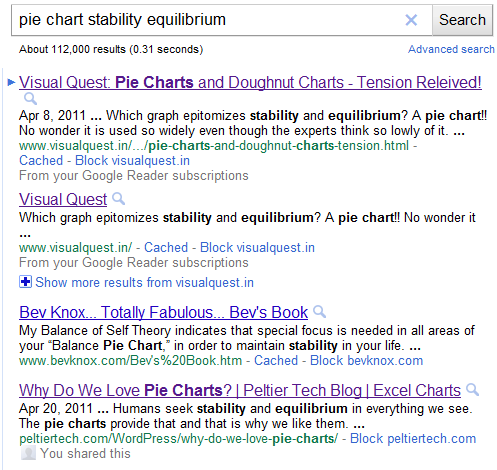 The first two links are to the first article by Paresh cited above, the third is to the web site of a woman whose Balance of Self Theory uses a “Balance Pie Chart” to help maintain one’s stability in life. The fourth links to a comment by Paresh in a recent post of mine, Why Do We Love Pie Charts?. Further down the list is Excel chart gallery: a difficult equilibrium by Jorge Camoes on his Excel Charts blog, where he discusses not Gestalt principles but instead the preponderance of “junk” charts in Excel’s chart types dialogs. In the first five search results pages, I found no mention of the stability and equilibrium of a pie chart.

A follow-up search of pie chart gestalt turned up Paresh’s article cited above, his comment on my post also cited above, and his comment on In Defense of Pie Charts, by Robert Kosara on the Eager Eyes blog. But there is nothing else about stability and equilibrium of a pie chart in the first five search results pages.

So I guess there isn’t a lot of discussion abut pie charts satisfying the human striving for stability and equilibrium. For me, the obsession with clearly presented data completely overwhelms any desire I have to seek stability within circles. A poorly conceived and implemented graphic actually upsets my equilibrium. SteveT commented on my Why Do We Love Pie Charts? post that pies may satisfy not Gestalt, but something Freudian.