Last week Microsoft released the 2010 technical preview version of Office 2010 to an excess of noise in the media and blogosphere. You’re all probably bored spitless of all the hype. Everyone was spewing the same press release fodder, and nobody had anything of substance to report.

Two weeks ago, I wrote that my main laptop died, and I had to scramble about to get a new one all configured. At about the time the Office 2010 preview was released, my dead laptop came back to life. To punish it for scaring me like that, I installed the preview on the revived machine. The installation went very smoothly, better than you’d expect for a beta version, and better than many installation experiences.

I’ve run Excel 2010 a few times now, and Word 2010 once by accident when I double clicked on a document in Windows Explorer. I didn’t notice at first because I was mesmerized by the dynamic splash screen, but Excel 2010 starts up very quickly. In general Excel 2010 seems to lag a bit less than 2007 while doing routine tasks.

The 2003 interface is pretty cluttered, but that clutter is a price I’m willing to pay for an efficient interface that displays all of my most-used commands at once, without hiding 90% of them. (I don’t think I’ll ever forgive Microsoft for this design debacle, but apparently we’re stuck with it.) The 2007 ribbon looks nearly as cluttered as the classic toolbar interface, not because it has lots of controls, but because everything is in boxes, and there is no shortage of graded coloring.

The 2010 ribbon has the same density of controls as in 2007, but it looks cleaner because of its lighter background and the elimination of much of the chart-junk-like features. Instead of boxes around all of the groups of controls, as in 2007, the groups are separated by a single light line, and the shadowing is much less pronounced.

A Designer Cleans up the 2007 Ribbon

A year ago Andreas Lipphardt of XLCubed wrote Microsoft, Pimp Down My Ribbon, a request to clean up the 2007 ribbon. He even showed how. He started with the ribbon out of the box:

Andreas cleaned up the ribbon by removing all the gradients and glows, and without all of the gratuitous effects, it certainly looked much cleaner.

Microsoft stopped here with the 2010 ribbon, but Andreas took it one step further, removing the large office button and the oversized ribbon buttons (e.g., Paste), and closed up the excess space. This was becoing too much like the classic interface.

Why Can’t Users Clean Up Their Own Ribbons?

Now they can, to some extent. Microsoft has added the ability to make changes to the interface through the interface. Even though RibbonX, the ribbon-specific subset of XML, is relatively easy to use to customize the interface, RibbonX is still way beyond a typical user’s capabilities. This ribbon customization capability gives back to the user some small measure of control, maybe 10% of what we once had. 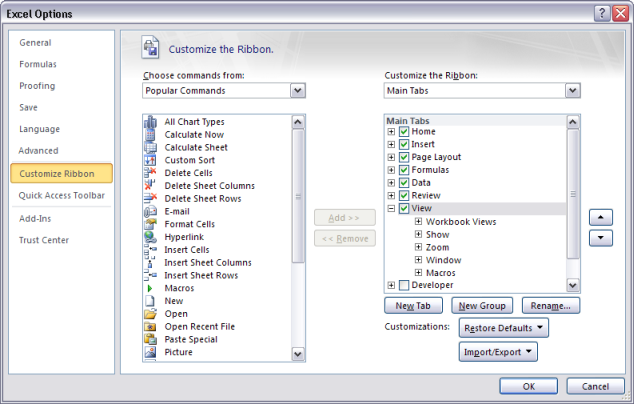 Charting on the Ribbon

I’ll show a couple shots to further illustrate the cleaner ribbon appearance in 2010. Here are the Charts groups from the Insert tabs of Excel 2007 and 2010.

Although the 2010 group looks much cleaner, the buttons are all the same as before, and in fact, all the options under the buttons are the same. The gallery of chart types in 2010 is just like that in 2007. The Chart Tools contextual tabs are also cleaner but with essentially no real changes. The one addition is a Draft Mode button on the Design tab. Its purpose is to allow charts to be drawn with only rudimentary formatting, to speed up screen refreshing in Excel 2007.

However, right next to the Charts group on the Excel 2010 Insert tab are two new groups: Sparklines and Filter, which houses the Slicer. These much heralded features are probably the most talked about new tricks in Excel 2010. The advance press for Sparklines on the MSDN Excel blog is very promising.

At first I thought that neither feature is enabled for testing in this early preview version. I didn’t notice that I was using Compatibility Mode, which disables advanced features introduced in 2007 and later. I apologize for my newbie error, and I anticipate testing out these features in the very near future.

I made a few charts, just to see what if anything has improved in the awkward Excel 2007 dialogs. One thing has changed: after being temporarily retired for one version, the ability has returned to double click on a chart element to open its format dialog! Unfortunately the dialogs that open up are unchanged from those of 2007. Too many tabs, too many options hidden in dropdowns when there is ample space to use listboxes or option buttons, too many clicks required to do otherwise quick tasks. And the F4 (Repeat Last Action) command is still AWOL. It remains to be seen whether any changes will be forthcoming in upcoming releases of the preview.

I’ve been working on a charting interface add-in for Excel 2007, and I suspect that it will be useful for users of Excel 2010 as well.

I recorded a few macros, nothing too complex, to see whether the huge gaps in Excel 2007’s macro recorder coverage have been addressed. In 2007 if you recorded a macro while doing anything with shapes, the macro came out blank. When working with charts, some actions were recorded, but many were missed, particularly those related to formatting of the shapes that make up the chart’s elements. Because the recorder didn’t record, we were without a tool that was so helpful to decode the intricacies of the object model.

Without examining the details, I was able to see that all actions were represented by commands in the recorded macros. Shapes and chart element formatting were again represented in the code. This is a great (re)addition to a developer’s toolbox.

Excel 2010 looks a bit cleaner and seems to run a bit more smoothly than Excel 2007. In the small part of Excel that I have examined, very little has changed. I will be looking at Sparklines and other neat new stuff in the near future.