Raymond Chen posted recently that The purpose of charts is normally to make information easier, not harder, to understand.

Not always. More often the purpose of a chart seems to be to:

Raymond backs up his assertion with a counter-example which I presume looks like this, with barely distinguishable green gradients and a useless legend.:

END_OF_DOCUMENT_TOKEN_TO_BE_REPLACED

In Calculating Easter (from Easter Formula), John Walkenbach posted a chart showing the frequencies of dates on which Easter falls. I wouldn’t go so far as to call this a “bad” chart, but I have two comments about it. 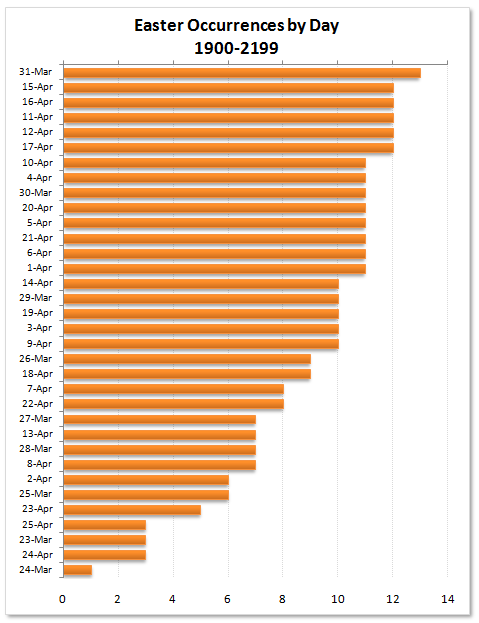 My first comment about the chart is that the combination of a gradient in the bar’s fill formatting, plus the shadows under the bars, makes me think either that there are multiple series in the chart, or that my eyeglasses need to be changed.

This issue is addressed simply by keeping the chart formatting as simple as possible. With all due respect to John, Excel 2007 makes it just too tempting to spoil a good chart. 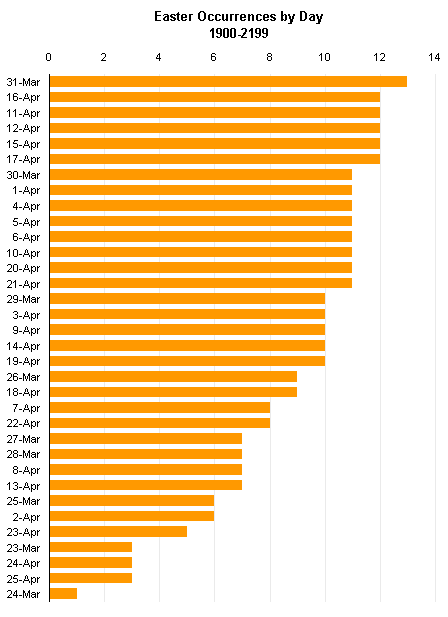 My second comment about the chart was that it might be more interesting to show the occurrences in date order rather than in occurrence order (a la Pareto), to try to understand why a given date may seem to be underrepresented. 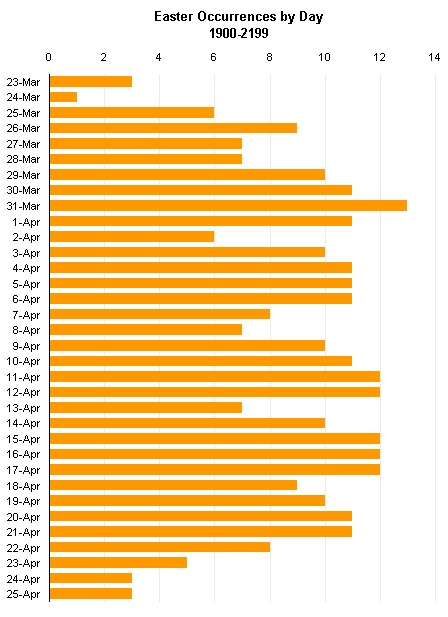 As expected, the dates in the middle of the date range are somewhat evenly distributed, while those at the edges (March 23 and 24, April 23-25) have lower representation.

I noted that John’s formula and one offered by Chip Pearson differed by one week in the prediction for 2079. Neither John nor Chip admit ownership of these respective calculations, so the error comes from the originators of one or the other relationship. I tried showing it in a bar chart, but that was even worse than the gradient and shadow in John’s chart that led me to write this post. Two series are evident, but it’s impossible to make sense of the chart. 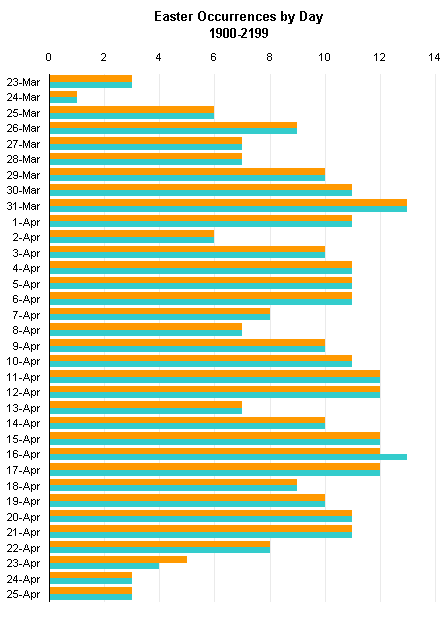 I converted this to a line chart with three series. One series shows all of John’s points, one shows all of Chip’s points, and one shows all the points where they agree. This last series is less distinctively formatted, and it appears in front of the other two series, so the chart highlights the points that differ while showing the general agreement. 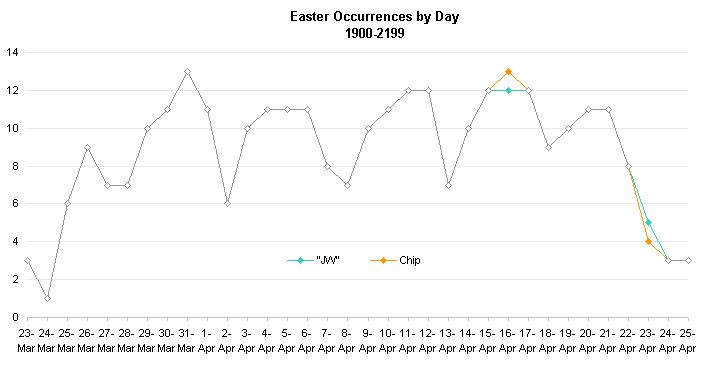 I’ve described the rationale behind my decision to sort the date axis categories by date in Choice of Category Axis Order. A future post will discuss various calculations of Easter.

John Walkenbach is the author of such popular, useful, well-written Excel books as Excel 2010 Bible, Excel 2010 Power Programming with VBA, Excel 2007 Charts, Excel 2010 Formulas, and Excel 2007 VBA for Dummies. Versions are probably still available for older editions of Excel, but for the most part, the content is applicable across the range of Excel editions.

I have a few rules for charting measured data:

You should avoid charts with smoothed lines, especially without markers, because the smoothed lines may misrepresent the actual data being plotted.

In response, Tim Mayes sent me this pair of charts (which he called “Smoothed-XY-Charts-Are-Evil.png“) and his commentary:

This picture shows two XY Scatter charts of the same data. This is supposed to be a step function as shown on the left side. If you choose a smoothed XY scatter, instead of Scatter with Straight Lines, then you get the chart on the right. All too often my students will turn in an example that looks like the one on the right, even though they have seen numerous examples of step functions and I’ve lectured extensively on them.

I’ve seen many more bad examples than good of charts with smoothed lines. One case I recall involved measurements of voltage that we knew ranged between 0 and 10. No measurements fell outside this range, yet the chart extended beyond it. 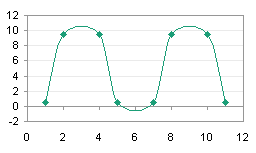 When the markers are omitted, it looks like the data ranges from about -1 to about 11. I’ve had people ask me how to determine the height of the peaks, which makes little sense: 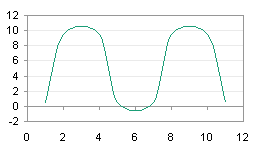 One case where smoothed lines may be acceptable is when the chart shows known (not measured) behavior over a range, generally when values are calculated from a theoretically- or empirically-derived function. One example is this chart I did years ago (back in the 90’s) showing wind chill, that is, perceived temperature based on actual temperature and wind velocity. 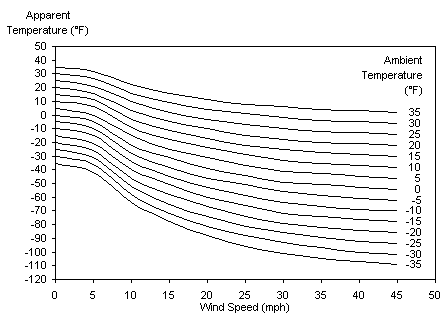 When the plot fills a sheet of paper, the smoothed lines worked well. When it is shrunk to fit a column on a web page (as above), the lines look irregular. A better approach would be to calculate data at closer intervals, so many shorter straight lines approximate the desired smooth curve.

In Data Visualizations Related to Gas Prices, Tony Rose of Support Analytics Consulting shows a series of visualizations he’s culled from the web, all related to gasoline prices. One infographic stuck out, partly for its overuse of chart junk, and partly for Tony’s interpretation. Here is the original chart, which Tony took from www.thebiblog.com, followed by Tony’s comments, which I’ve condensed. 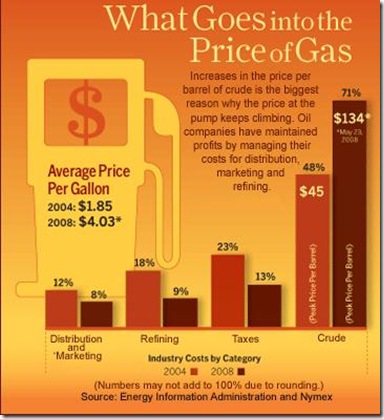 Here is a visual of what makes up the price for gas in 2004, when the average price was $1.85 per gallon versus 2008 where we are now paying roughly $4.03 per gallon on average. . . . One fact that I would have expected to see below is a dramatic increase in the distribution cost of gas between 2004 and 2008, which actually decreased. Seems like there should be an almost perfect correlation between distribution costs and the price of gas, right? Maybe the impact is hidden due to the category being both distribution and marketing.

END_OF_DOCUMENT_TOKEN_TO_BE_REPLACED

In Line Chart vs. Step Chart I compared step charts to line charts, and presented a quick way to prepare data for making a step chart. My insightful colleague Derek pointed out that a similar chart with the horizontal segments only, and with vertical segments (risers) hidden, may be a more effective display method, because the risers may attract undue attention. 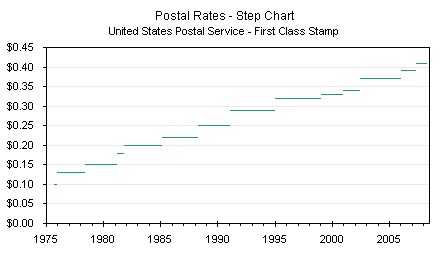 Derek complained about the relative complexity of his chart: it used a line chart series to provide the nice date scale category axis, but it required an XY series so he could use X error bars for the horizontal segments. Too many series for his, and my, liking. As it turns out, the protocol to prepare line chart data for this variation on a step chart is really not more complicated than for the regular step chart. END_OF_DOCUMENT_TOKEN_TO_BE_REPLACED